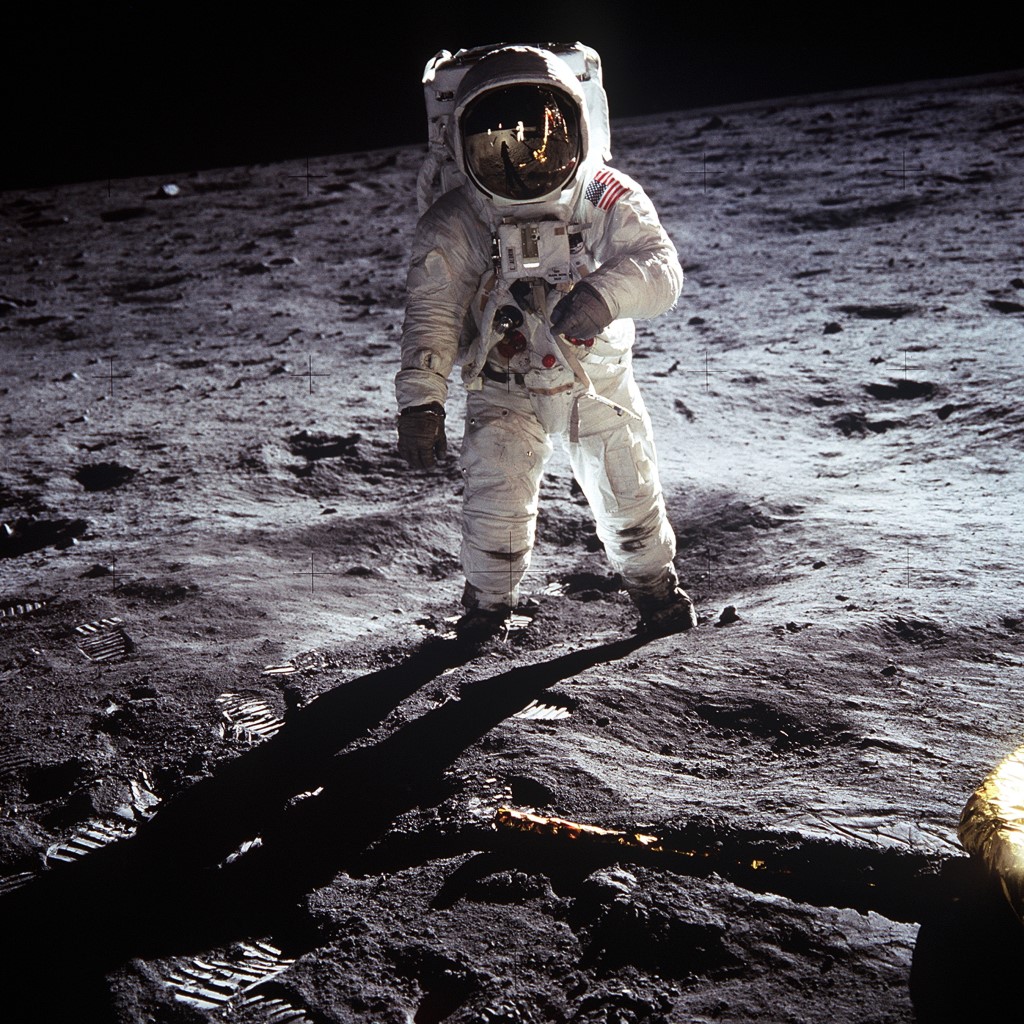 A significant percentage of the population has access to images of just about anything, at any time of the day. Many also have a way to record images themselves, for others to use, purchase, or simply enjoy.

A Brief History of Photography 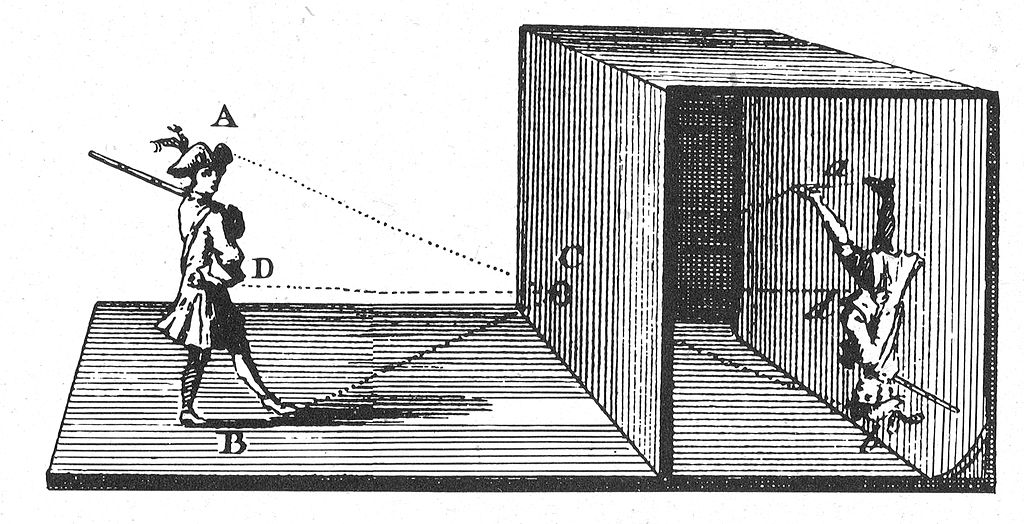 An in depth history of photography goes much further into the past than most people might imagine. In order to understand photography today, we need to understand the reasons behind the inventions and innovations that led to photography as we know it today.

From before the time of the oldest recorded writings in any language, there were drawn representations of the natural world around us. We may never know who the first artist was, or if the first subject matter was a tree, a person, an animal, or the clouds in the sky. All we know is that recording the world around started and we have been drawing, painting, and sculpting ever since.

From the 5th Century B.C.E. until the 1700s, a device known as the camera obscura was being used to assist artists in creating more detailed and natural looking drawings and paintings.

Spurred on by the burgeoning science of astronomy, scientists and inventors began looking for a way to let light itself do the drawing. The term photography, literally ‘drawing with light’ was coined to describe the process being developed. 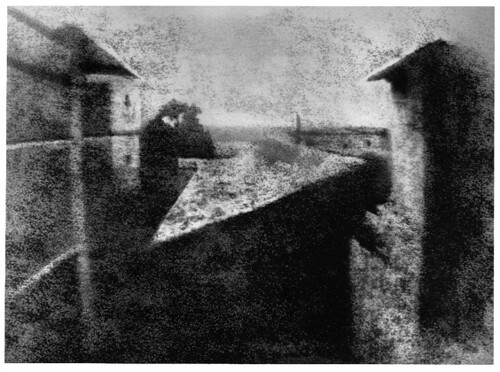 By Joseph Nicéphore Niépce 1839 by augenbuch is licensed under CC BY-NC-ND 2.0.

Sure, it sounds nitpicky to say it that way, but the truth is that we don’t know for sure if there were other successful photographs before then. If there were earlier photographs, they weren’t successfully preserved, so they don’t count.

It is a photograph of the view outside the window from an upstairs room. Made by Joseph Nicéphore Niépce in France in 1826. The exposure was so long that you can see that the sun illuminated both sides of the building!

The First Photograph of a Person 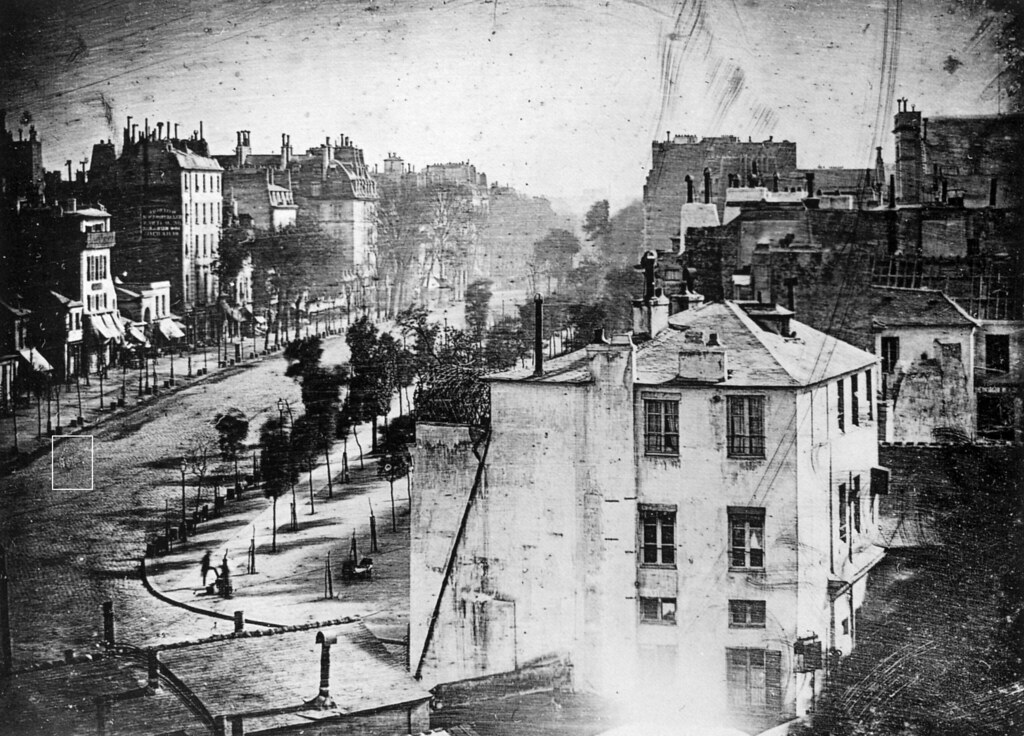 The year was 1838, the place was France, the photographer was Louis Daguerre. Yes, the same Daguerre who invented the Daguerreotype process that was also a first, the first popular repeatable process for photography. By the 1840s, Daguerreotypes were being made by photographers around the world.

Who this first person was is unknown. It’s a large scene that was photographed and the person is merely a small part of the scene.

What makes it really interesting is that exposure times were typically in the range of 5 to 10 minutes, so a person walking through the scene normally wouldn’t stay in the frame long enough to be recorded. This guy was apparently getting a shoe shine, so was there for a long enough time to register. 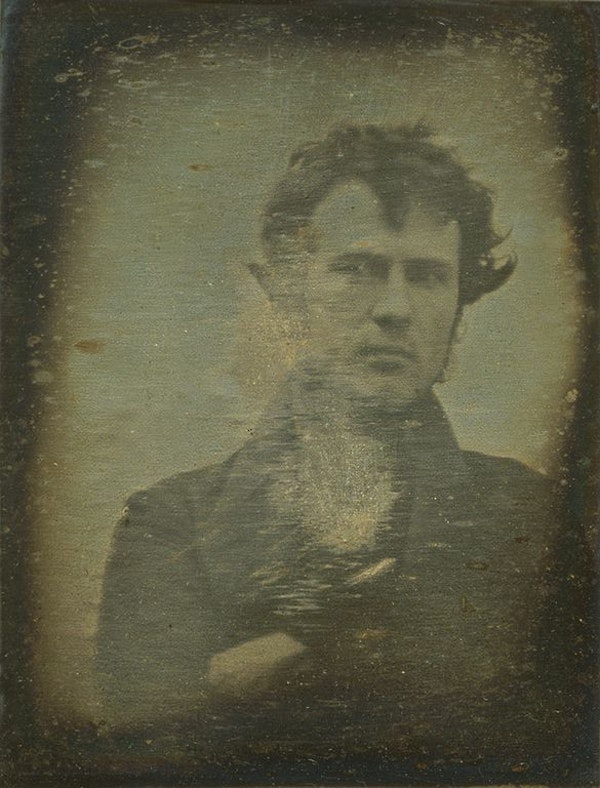 It figures that the first selfie would be of someone from the USA. I kid, I kid. Americans took to photography in a huge way right from the start. Naturalists were recording everything from the Grand Canyon to the Great Lakes. Portraits were a big deal as well.

Many artists have made self portrait paintings and drawings for a long time. This first self portrait photograph was taken in 1839 by Robert Cornelius in Philadelphia. The process used was Daguerreotype.

In 1840, from the roof of the observatory of New York University, John Draper took a Daguerreotype of the Moon, Earth’s large natural satellite. Sadly, the image, though preserved, is badly damaged. You can definitely see the Moon in the photograph.

A lot of early improvements in the science of photography were produced by astronomers and other scientists.

Learn more about this famous first photograph in the video above by VideoFromSpace.

First Photograph of the Sun

Actually, this image label is a little bit up for grabs, too. But this is one that we know for sure and it has survived. French Physicists Louis Fizeau and Leon Foucault took it in 1845 as a Daguerreotype.

Shouldn’t be too surprising that astronomical subjects were imaged early on photography since astronomy was a driving force behind the development of photography.

As a trivia point inside this trivia, you can see sunspots in the image.

Get more details about this and other first photos in the video above by Evolicious.

The birth of photojournalism came from recording images of war and other important events. Among the first events usually pointed to as the beginnings of photojournalism are the June Days 1848 workers revolt in France, the Crimean War of 1853 - 1856, and the US Civil War of 1861 - 1865.

The first news event with a surviving photograph recording it was an arrest of a man in France in 1847. The name of the photojournalist is lost, but his image survives.

Another pioneer in photojournalism was Mathew Brady. Learn more about him in the video above by the Smithsonian Magazine.

First Photo of a Sitting US President 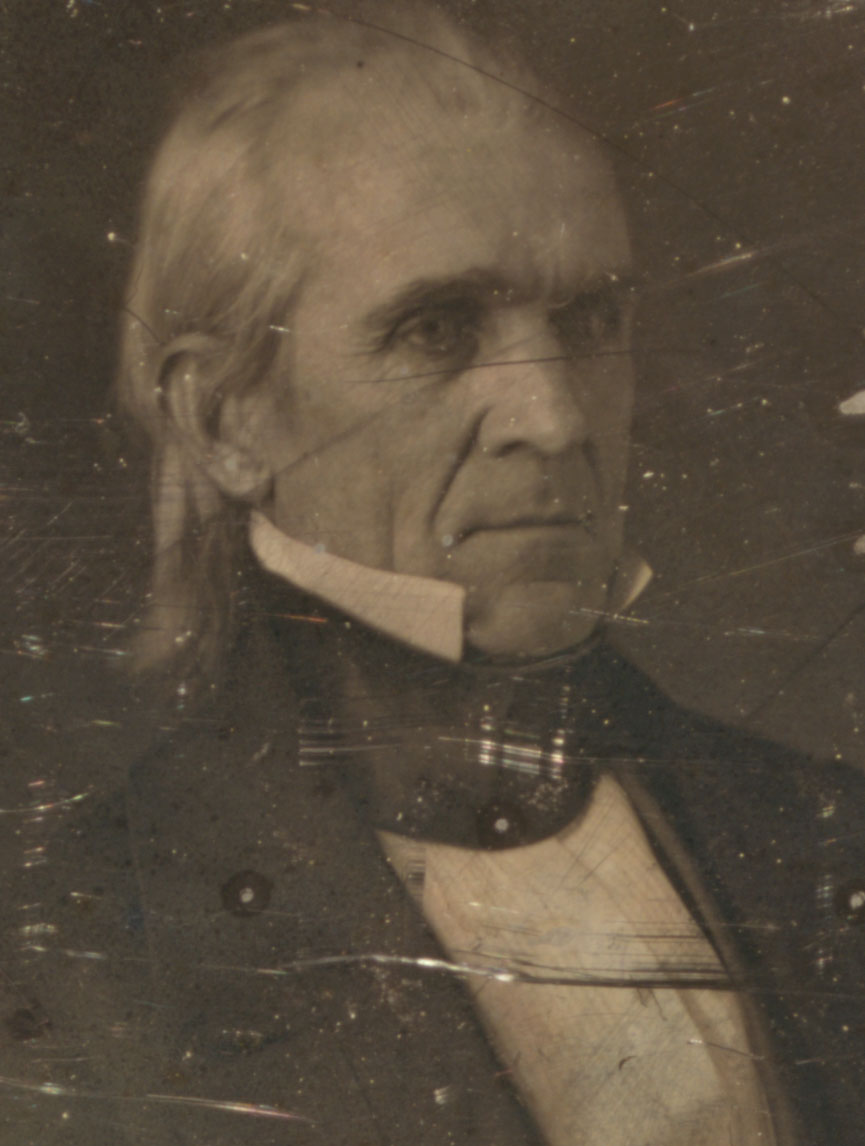 By Mathew Brady - This image is available from the United States Library of Congress's Prints and Photographs divisionunder the digital ID cph.3g06742.

The first photographic image of a US president in office was taken of James K Polk in 1849. Fitting in a way, because it was during Polk’s presidency that the USA grew by the additions of Texas, California, and New Mexico.

All of which contain beautiful areas which were captured as fantastic photographs by the new breed of artist/scientists made possible by early photography known as naturalists. Along with photojournalists and portrait artists, naturalists had a big part in spreading the popularity of photography. 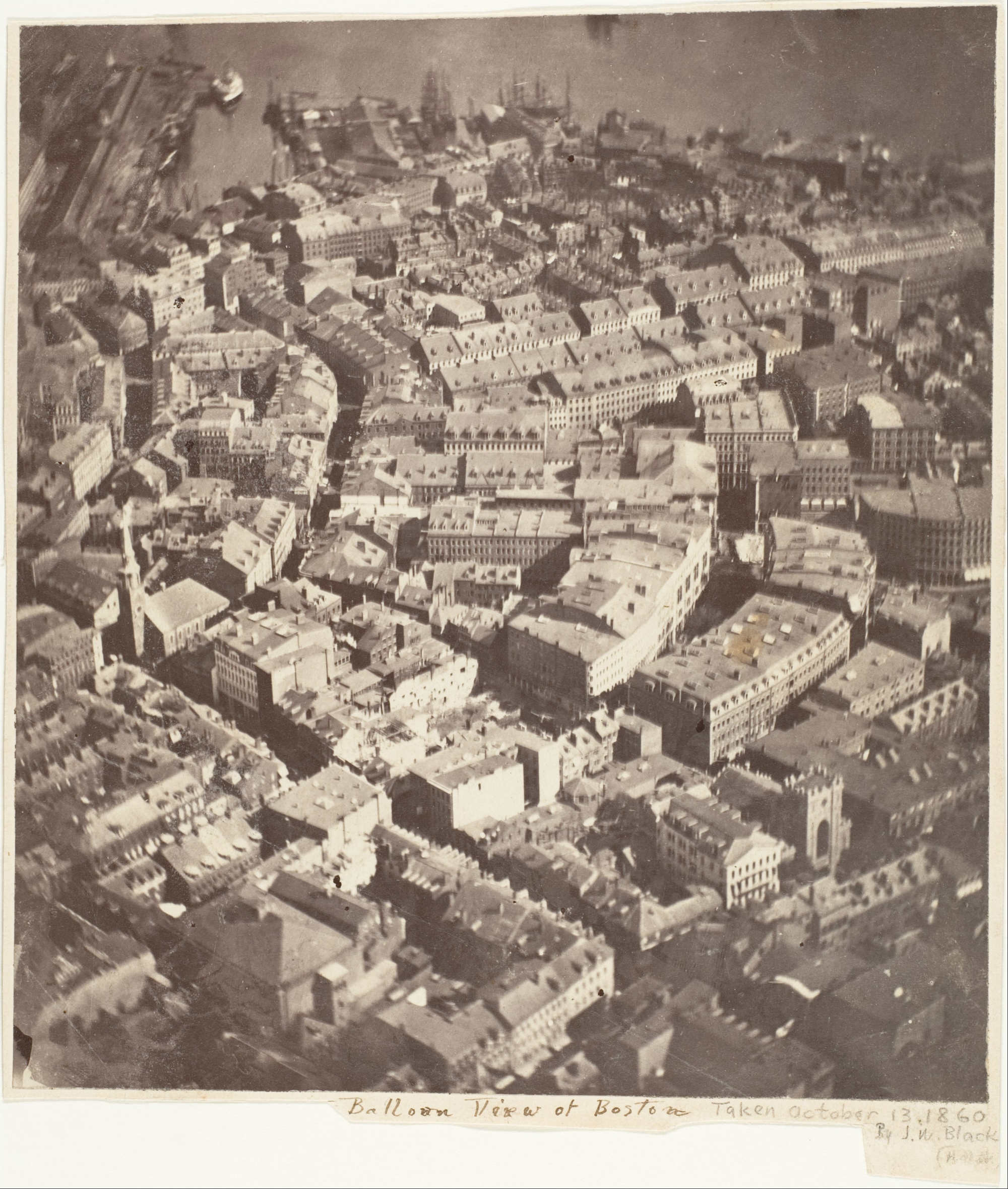 Way before drones controlled by a smartphone or even early airplanes, photographers were figuring out how to take photographs from a vantage point high above the ground. Balloons were the obvious choice. They had to be manned balloons, since there was no reliable way to remotely trigger a camera yet.

In 1860, James Wallace Black rode up in a balloon to the height of about 2000 feet above Boston, Massachusetts. He titled the resulting image “Boston, as the Eagle and the Wild Goose See It”.

The process involved was complicated, but the results were amazing. The camera operator was inventor and engineer Thomas Sutton, who later invented the idea of the single lens reflex or SLR and also an early version of a panoramic camera.

This image was taken in England in 1861.

Learn all about it in the video above by Short Form Docs.

Can you imagine? Storm chasing without a car, cell phone, radar map, or a digital camera?!

Take a good look at this amazing image. A.A. Adams took it in 1884, in of all places Kansas. Today, Tornado Alley is full of storm chasing meteorologists every Spring. This storm sprung on April 26th, 1884.

Before this photo, the only way anyone ever saw a tornado was as a drawing or illustration in a newspaper or textbook, or by being in the vicinity of one of these violent storms and viewing it in person.

We fast forward quite a few years, skipping many outstanding innovations in photographic technologies. It’s not that there weren’t a lot of photographic firsts in the early 20th Century, but rather that we were looking for some extreme examples to include in this list.

On October 24th, 1946, a team of scientists working for the government launched a captured German V-2 rocket with a camera mounted in it. The launch was from a base in New Mexico, USA and the image of the Earth was taken from a height of 65 miles.

Get more details about this photo in the video above by RedBled - Adult Education.

Though the first self contained digital camera wasn’t invented until 1975 by a Kodak engineer, the first digitally produced image was taken in 1957 by Russel Kirsch. He scanned the original film image to a computer with a resolution of 176x176 pixels. The computer memory couldn’t handle any higher resolution.

This image is shown in the short video above by Everything Jay.

First Portrait Photograph on the Moon

Here we are back with the scientists studying space. There is always going to be a link between science and art in photography.

The image is of the second human to step foot on a celestial body that wasn't the Earth, Buzz Aldrin. Taken by the first man to take one giant leap, Neil Armstrong. The camera was a Hasselblad, the film was Kodak, the date was July 20th, 1969.

How Many More Photographic Firsts Will There Be?

The beauty of this question is that there is no way we can answer it. Photography continues to grow, photographers continue to innovate, and the worlds of science and art continue to collide.

I wonder what this type of list will include in the next 100 years?