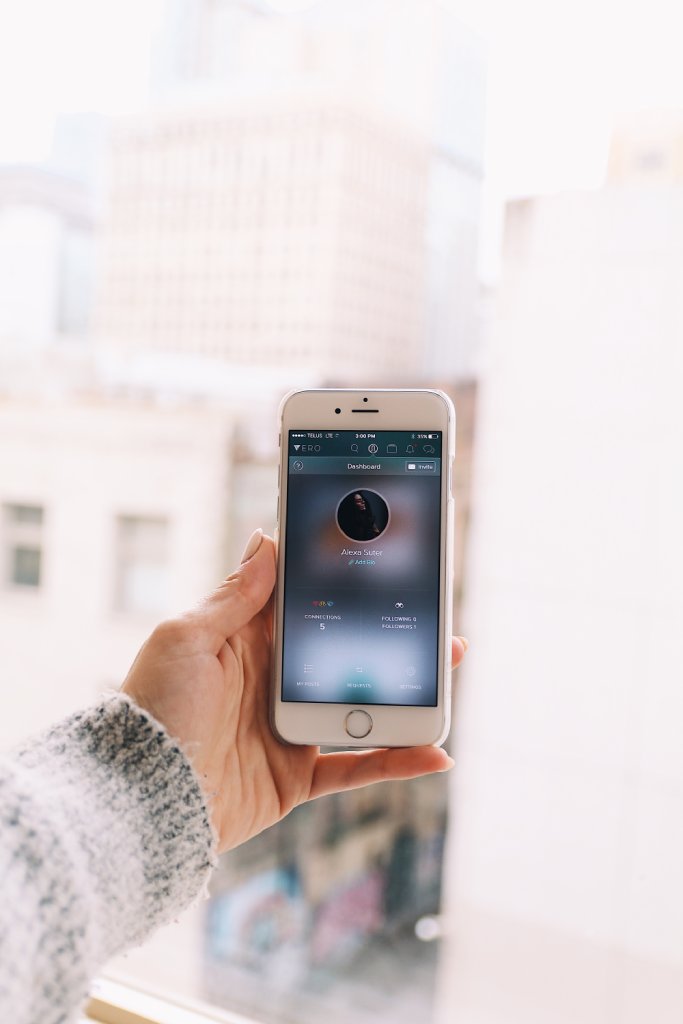 Photo by Alexa Suter on Unsplash

With just a week until Valentine's Day, those of us who are single are sprucing up our dating profiles looking to find our perfect match.

Snappr, an on-demand photography service that's been compared to Uber, released an AI app that will analyze your dating profile pictures and analyze them to hopefully get you more right swipes.

we tried the ai app (so you don't have to)

The Dating Photo Analyzer app was released a year ago after the founder of Snappr, Matt Schiller, had incredible success with a similar AI app for LinkedIn profile pictures.

"Around a year ago the team at Snappr launched a photo analyzer for LinkedIn profile pics," Schiller explained on ProductHunt. "It quickly became the most popular tool of its kind," he said.

"At the time, many people told us that we should make one for dating photos... at long last, we have!"

"One thing that we'd like to point out," Schiller said, "is that the analyzer isn't focused on who's 'hot or not,' but rather on things that you can easily change with better photography and editing."

You can upload photos straight from your computer, or use ones you're already using on other social media sites.

Now, I'm in a happy, fulfilling relationship with a very trusting partner so I told him I need to figure out if my profile pictures would do well on Tinder (obviously).

I uploaded my photo from LinkedIn because it was taken by a professional photographer. 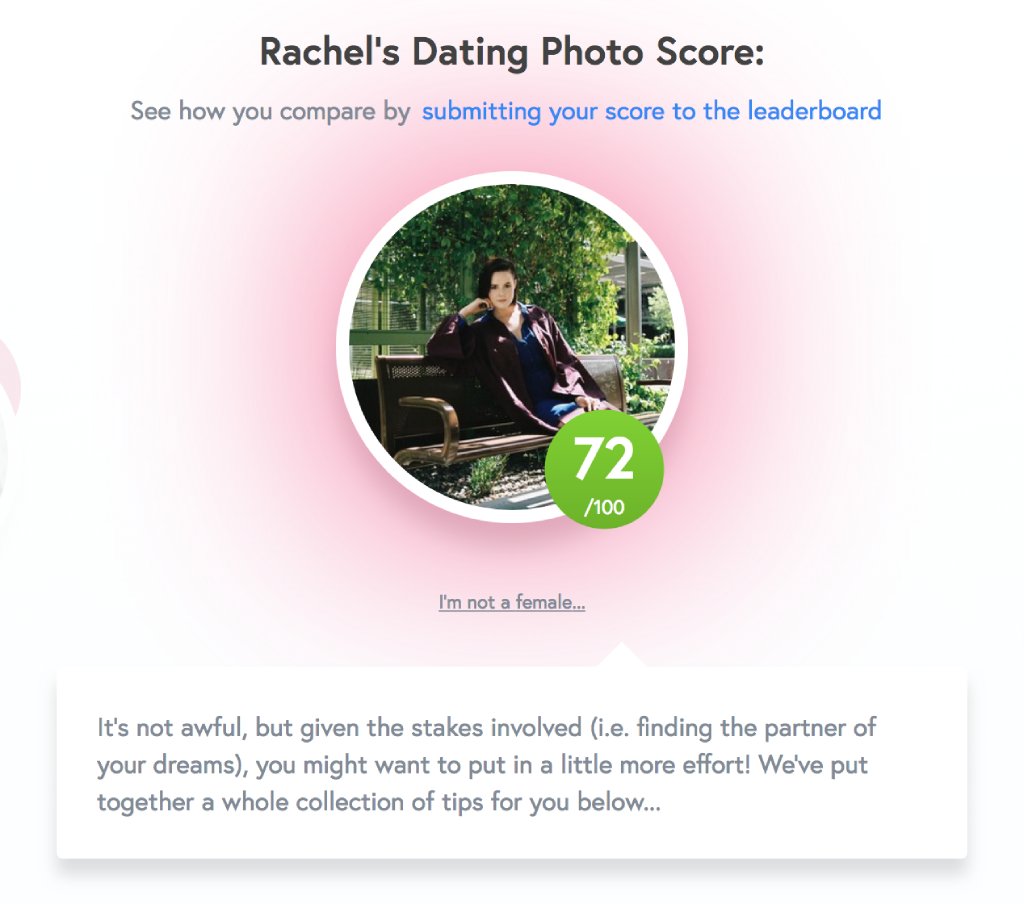 I was initially dismayed to find an abysmal grade of C-, but considering I still made the leaderboard of Top 100 photos I decided the machine just grades harshly.

The AI breaks your photo down into 5 categories: face, composition, setting, editing, and other.

The first thing the AI told me to do was "smile more," which my feminist sensibilities immediately shuddered away from. Basically, I'd like to know what research they loaded this AI with and why it's telling me I need to be smiling because I'm a woman. 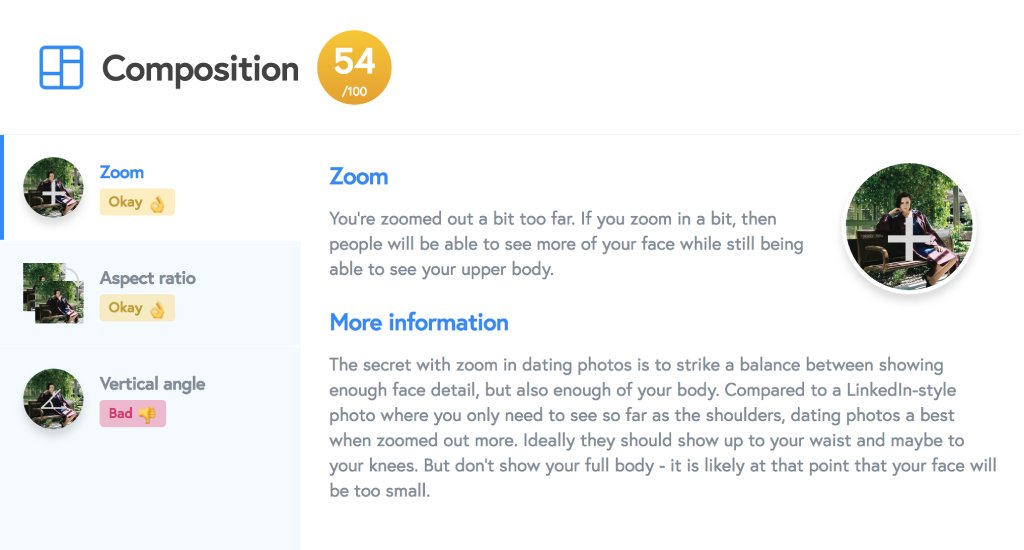 The composition tips were a lot more useful. It told me I was too far away from the camera and that my aspect ratio was off. It also told me exactly how to crop the photo to get the aspect ratio on point. 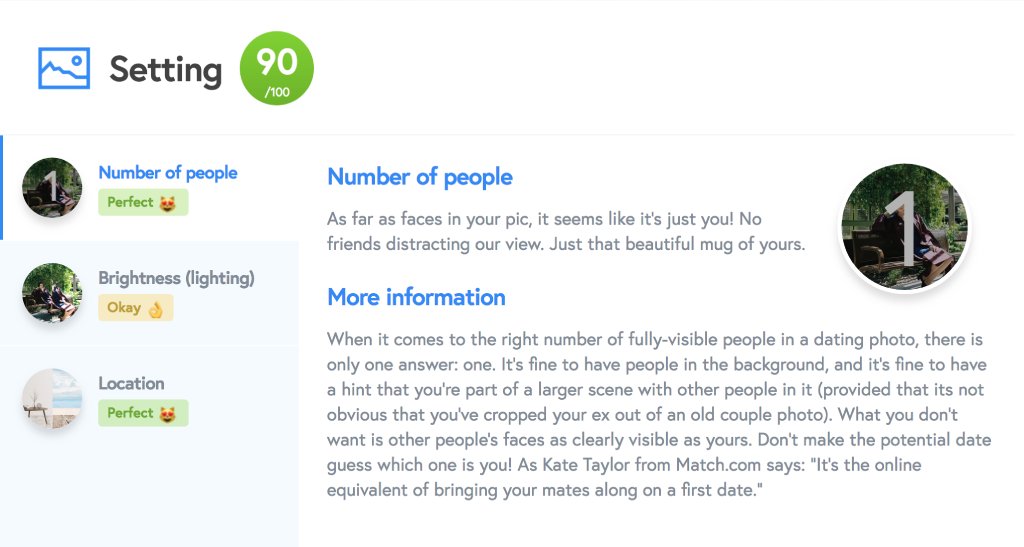 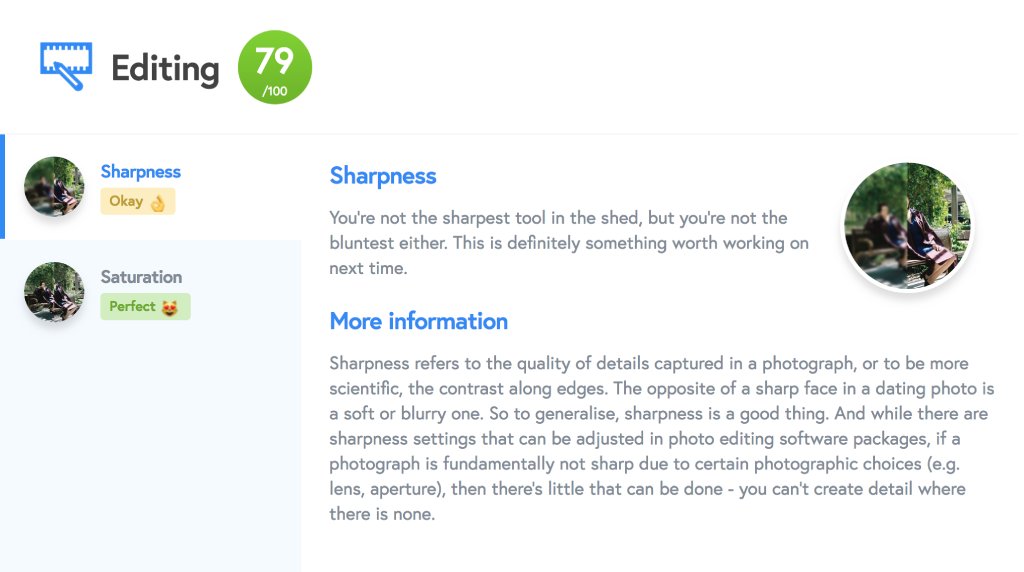 While the app didn't say it in so many words, it detected that my photo wasn't taken on a "good camera," because the sharpness of my photo was only okay. This makes sense because my graduation photoshoot was completed with 35mm film instead of a nice, fancy DSLR.

I felt like the "other" category was basically like a side note for your future dating profile pictures. It suggested I show off my body more by wearing a swimsuit and it suggested I take photos with my pets. 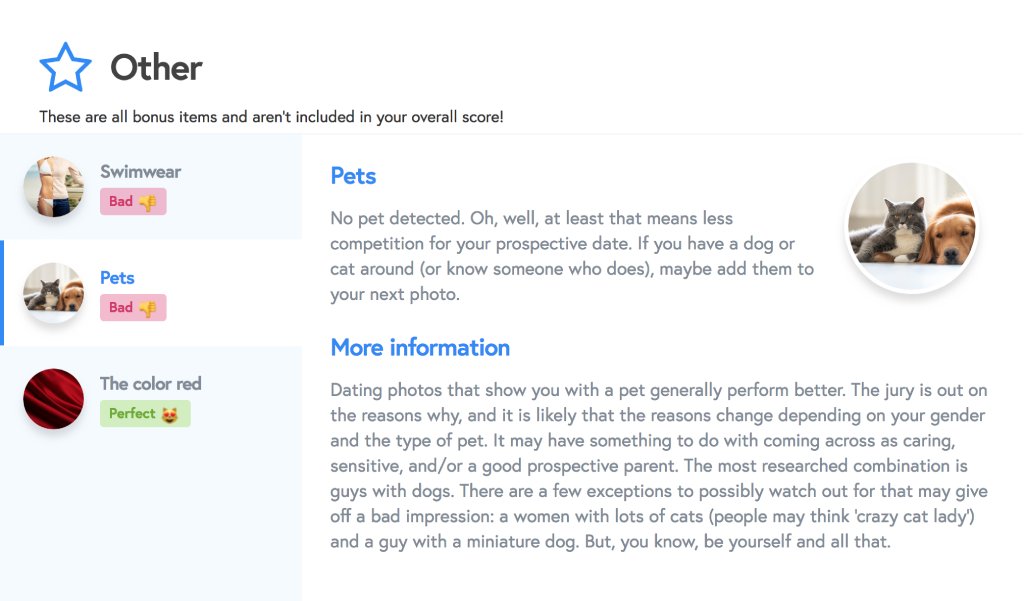 That is unless my pets are "lots of cats," or I'm a guy with a "miniature dog."

Overall, the AI seemed like a shallow critique and focused less on photography and more on gender roles, but then again the more self-possessed you are the better you tend to do on most of these apps in the first place.