6 Tricks to Add Depth to Your Photos 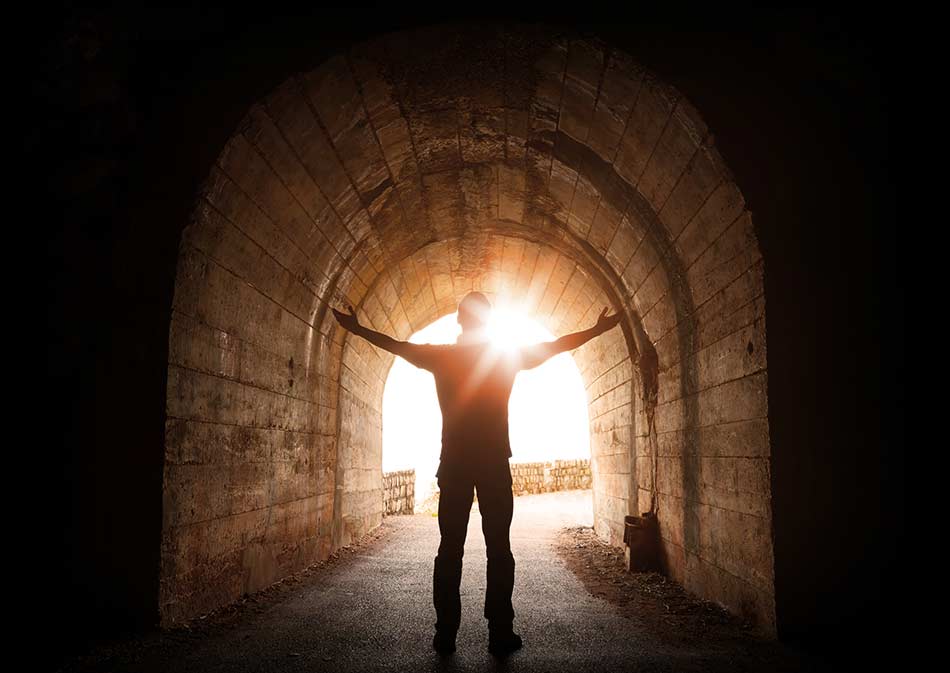 One of the obstacles that all photographers face is figuring out how to make their images look less two-dimensional and more three-dimensional. Of course, this is easier said than done because, unlike our eyes which see everything in 3-D, our cameras can only muster 2-D.

However, there are some tricks you can use to try to boost the depth of your images. And, by doing so, you can make your images appear as though they have greater dimension than they actually do. Let’s review six of our favorite tricks for doing just that. 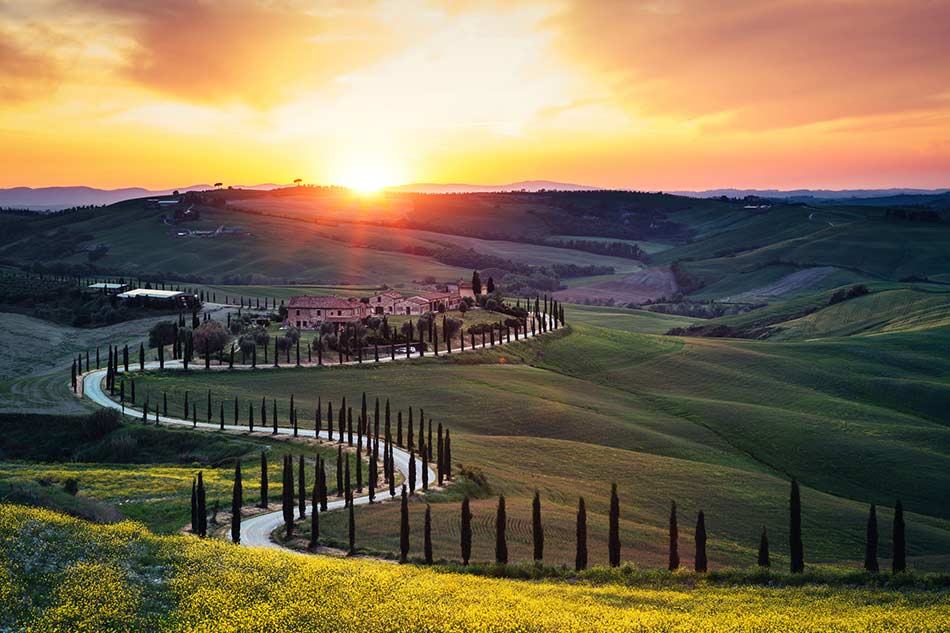 Perhaps the most straightforward method of adding depth to your photos is to incorporate the use of leading lines. This is a particularly successful technique when shooting landscapes, but works well for photos of cityscapes, street scenes, and architecture too.

When “leading lines” is mentioned, many people likely envision a straight line, like a fence in a landscape, or converging lines, like train tracks. And while these lines certainly fit the bill for adding dimension to a photograph, leading lines don’t have to be straight.

Take a look at the image of the winding road and note how your eye follows it from the foreground to the background as it snakes its way across the landscape. Note as well that the tall, thin trees that line the road help to further define the lines, making them that much more visually impactful. The result is that there is a greater connection between the foreground, midground, and background, and the photo has greater depth.

Why it works: Leading lines help give an image a sense of movement because the lines direct the viewer’s eye from one area of the photo to the next. What’s more, lines can help draw attention to the primary subject. Either way, because the viewer’s eye follows the line, the image has a feeling of being more expansive and having more detail than it might have had at first glance. 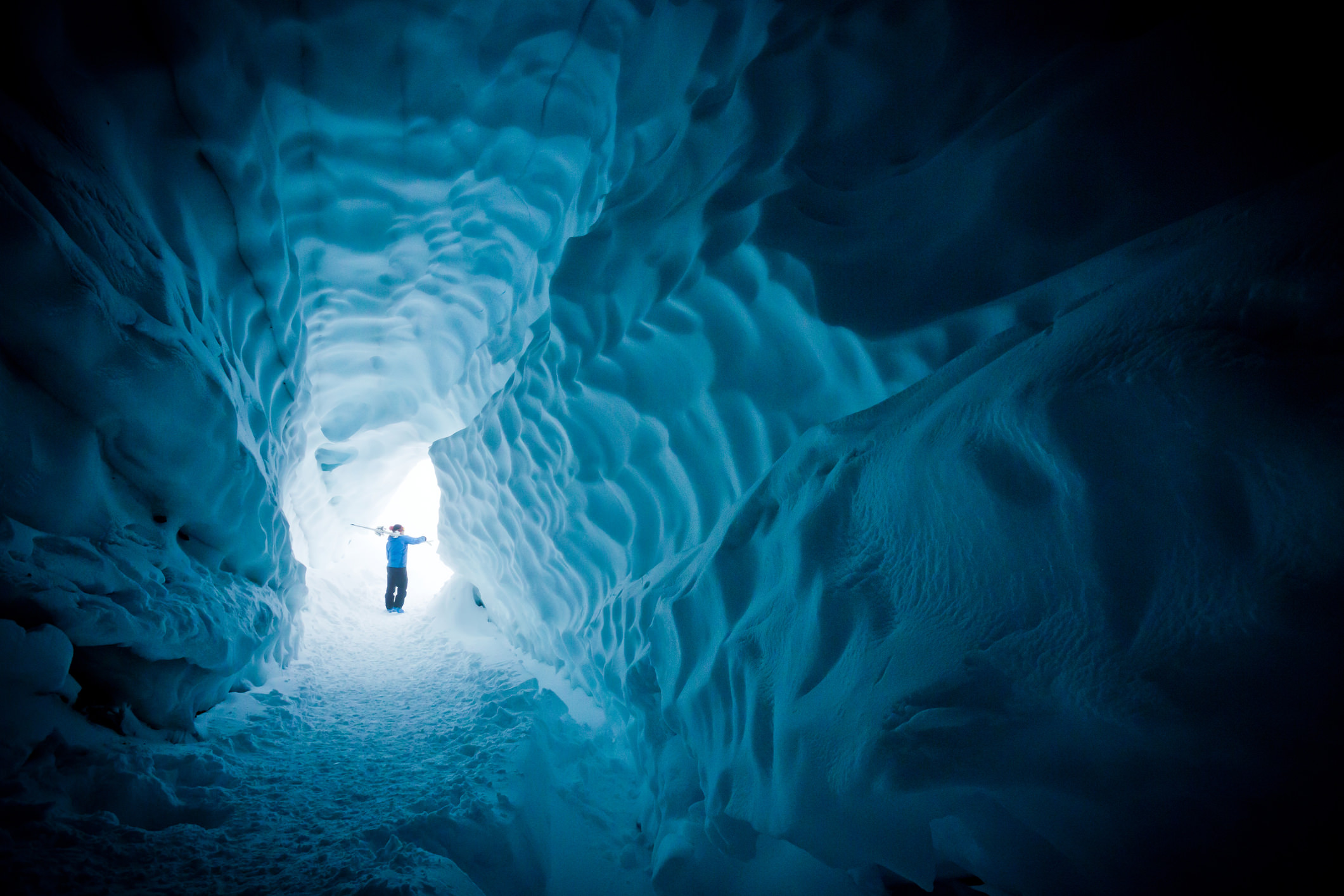 Framing your subject involves including an element in the foreground of your photo such that it surrounds your primary subject. This technique can be used in a variety of photos, from portraits to landscapes, wildlife to abstracts. Whatever your subject, the frame acts as a way to provide perspective that enhances the feeling of depth.

Looking at the image of the ice cave, we can immediately see how the frame within the frame helps give the photo improved dimension. The size of the ice cave’s walls in relation to the skier in the background indicates just how far away the skier really is. The texture of the walls in the foreground also give us a sense of depth because of the way that the ridges in the ice cast shadows. Notice as well how the frame forces your eye deeper into the shot, which, again, indicates greater depth.

Why it works: By incorporating a frame into the frame, you add an element that helps draw the viewer’s eye into the shot. Because frames are placed in the foreground, the image has a greater sense of dimension because the frame is so prominent in the scene and the primary subject is smaller in comparison. This difference in size helps give the photo the visual depth it needs to appear more three-dimensional. Additionally, the frame helps the viewer feel as though they are inside the photo rather than merely looking at it. 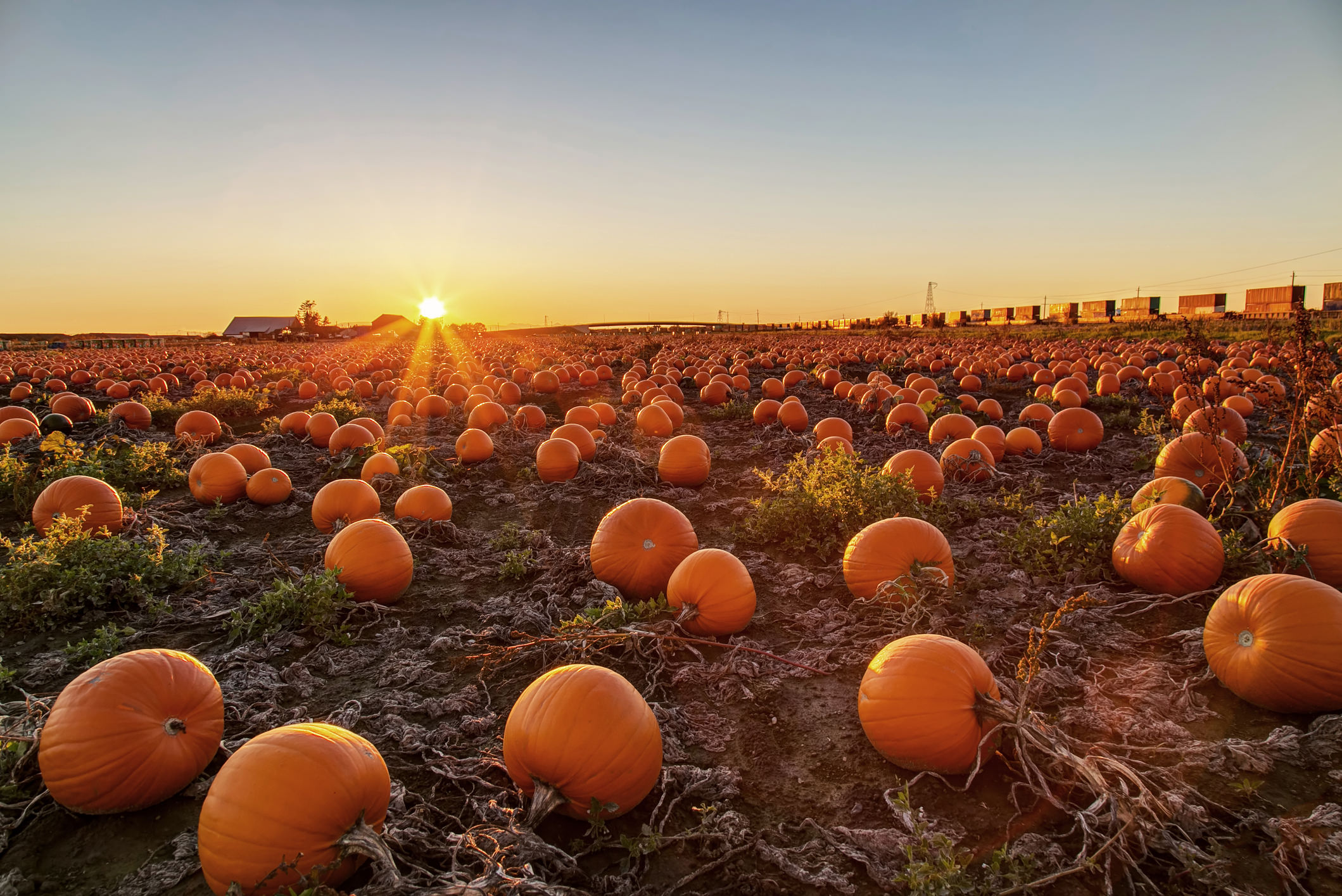 The perspective from which you shoot can determine the level of dimension in a photo. For example, if you stand straight up and take a photo from your eye level, an image might feel flat because of a lack of foreground interest to draw the viewer into the shot. However, the same shot taken from a kneeling or laying position - which helps incorporate foreground interest - can have much more depth as a result.

In the image of the pumpkin field, the low shooting angle helps the viewer understand how far the field extends into the distance. This is because in the foreground the pumpkins are relatively spread apart, but as the distance mounts, the pumpkins appear to be much closer to one another, which indicates depth. Additionally, since most people are familiar with the average size of a pumpkin, it’s easier to understand the dimension of the shot as the perceived size of the pumpkins gets smaller and smaller they closer they are to the background.

Why it works: Using a low shooting position capitalizes on the same principles as using leading lines and a frame within a frame. By adding foreground interest, you not only give viewers a more unique perspective from which to view the scene, but you also provide them with interesting visual elements that begin to draw their eye into the shot.

Connect the Foreground, Midground, and Background

In many cases, particularly if you’re photographing a landscape, your images will have foreground, midground, and background elements. To help enhance the impression of depth, it’s important that these elements not exist in a vacuum, but rather be visually connected in some manner.

In the landscape image above, note how there are distinct zones - the plants in the foreground, the valley and buildings in the midground, and the mountains in the background. But, note how each is visually connected. The inward slope of the foreground funnels your attention toward the buildings in the midground. From there, the lines of the roadway push your eye to the mountains in the background.

Why this works: By connecting the three layers of an image,  you help move the viewer’s eye through the photo. That is, the foreground draws the viewer’s eye inward and leads them to elements in the midground (where the primary subject is often placed). From there, the midground, if connected in some way to the background, further moves the eye along deeper into the photo. Therefore, the effect of connecting the foreground, midground, and background is much like the effect achieved with leading lines - it helps give a sense of depth because it forces the viewer to move their eyes around the photo. 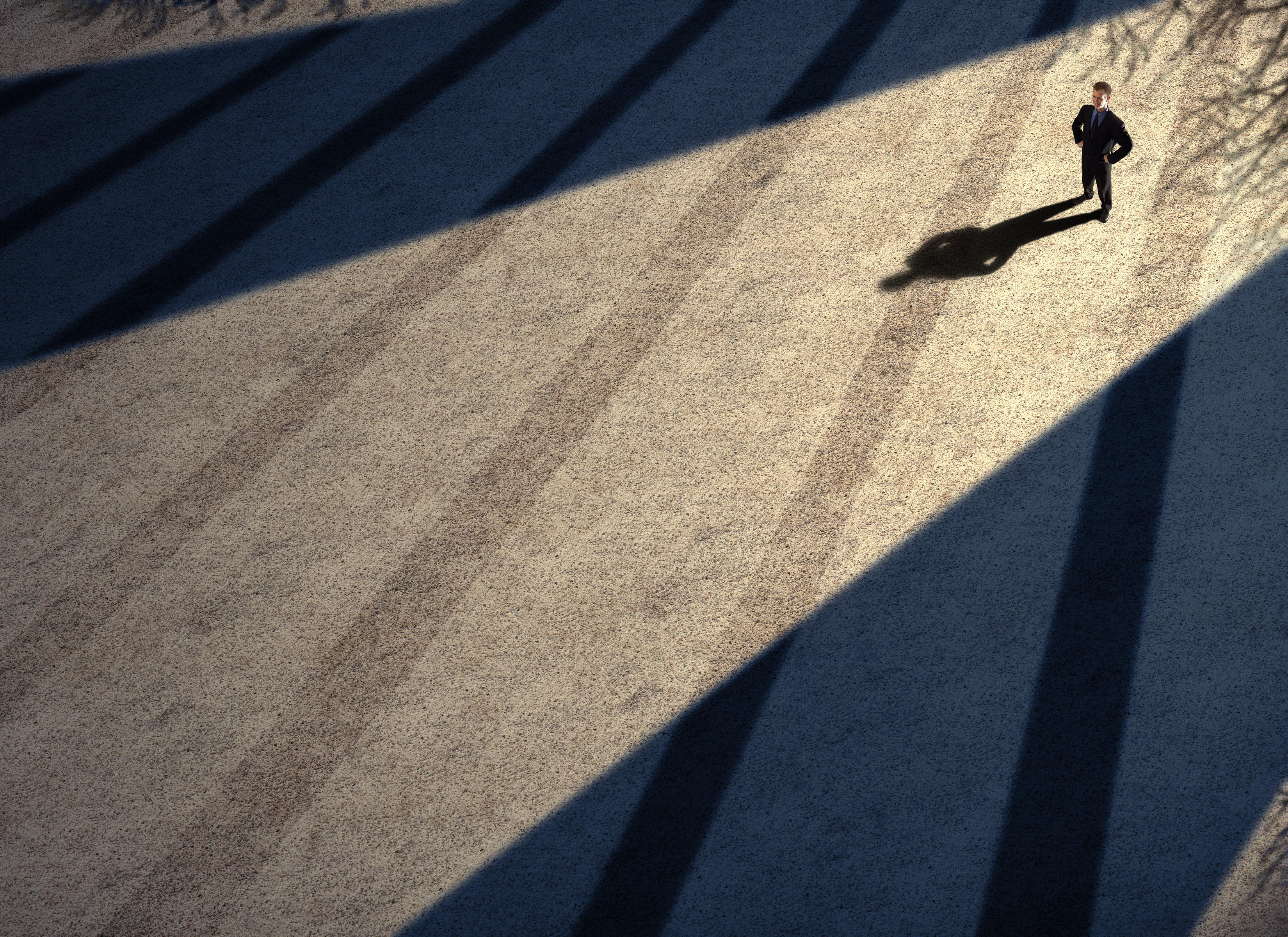 One of the primary elements that influences the quality of a photo - any type of photo - is the lighting. Good lighting can make a photo; bad lighting can ruin it. But what’s often overlooked is the value of the shadows created by that lighting.

When it comes to conveying depth, there are fewer tricks that are easier to use than shadows. Looking at the sample image above, you can see this principle at work. Though the image is quite simple with a lot of negative space and muted colors, it still has tremendous depth because of the shadow details cast in the foreground and background that frame the primary subject. What’s more, the man’s shadow adds another element of depth because it draws the viewer’s attention and gives his form more visual weight in the photo.

Why this works: Whether shadows are cast toward the foreground, toward the background, or to the side, they make an otherwise flat scene appear to be more three-dimensional. Shadows can be dramatic as well, giving the photo more excitement and helping viewers find more interest in the scene. 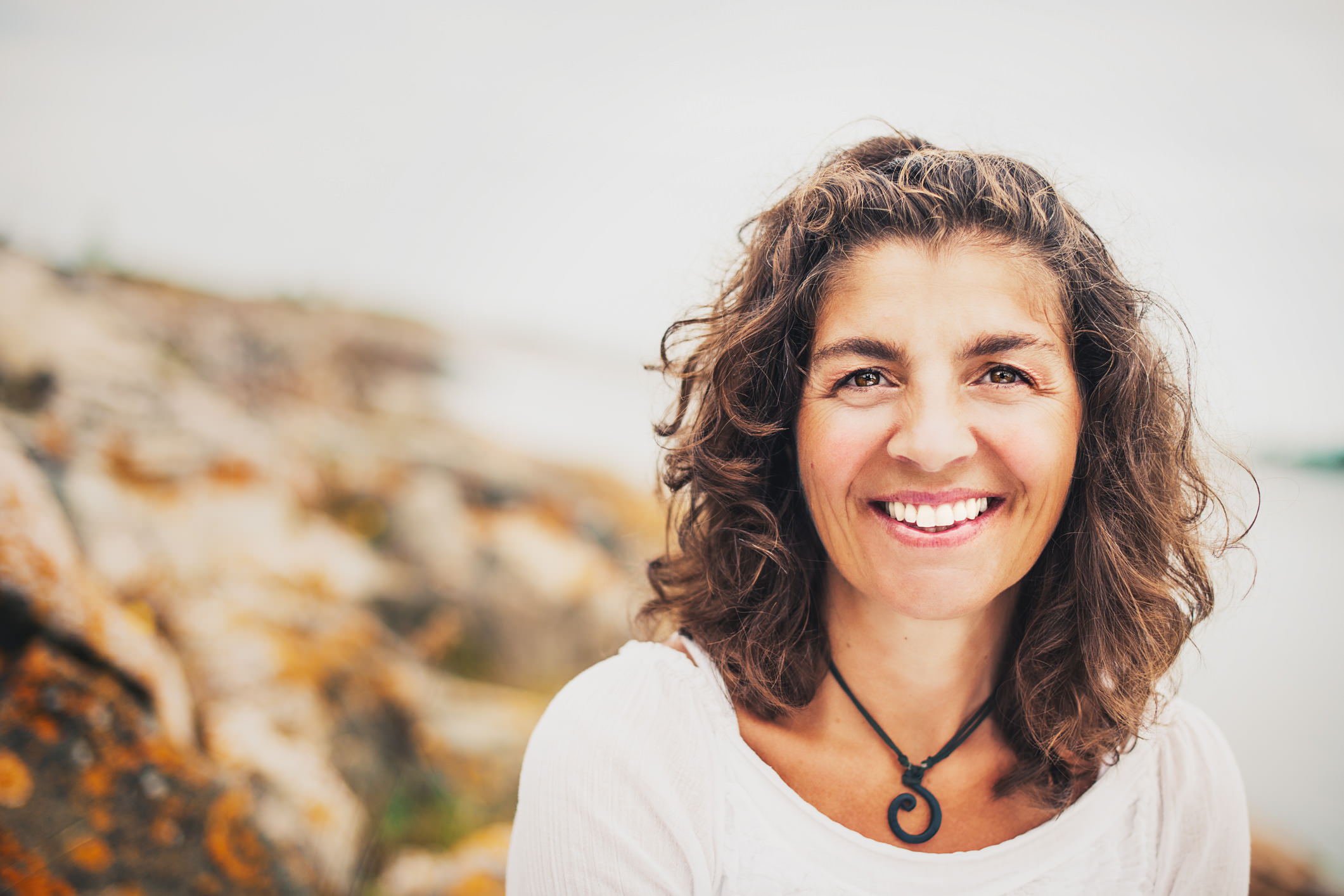 Though it might seem counterintuitive, using a shallow depth of field and blurring the background actually helps define a greater sense of dimension in a photo. This technique helps separate your subject from the background due to the differences in their sharpness.

For example, in the portrait of the woman, we get a sense that the larger scene has much greater depth than we can see. That is, even though the background is blurry, we still understand that the landscape extends for a great distance behind the woman. This is due in part to the fact that the woman is perfectly sharp and placed in the foreground, which gives us a visual separation between her and the landscape behind her.

Why it works: In this case, depth in the image is indicated by the difference in sharpness between the subject and the background. Because the subject is tack-sharp, the viewer perceives them to be quite close. Yet, because the background is blurred, the viewer understands that it is further away, perhaps out of the range of their vision.

Creating a compelling photo is much more than simply raising your camera to your eye and pressing the shutter. Indeed, if you want the most successful photos, you’ll need to consider how they are composed such that they indicate depth, drama, and dimension.

The next time you’re out with your camera, give each of these tricks a try. Experiment with shadows and light, seek out ways to connect the foreground to the background. Change your point of view. By practicing these techniques, you’ll find that adding depth to your images becomes much easier, and your photos will be more successful as a result.