7 Ways to Get a Sharper Bird Image 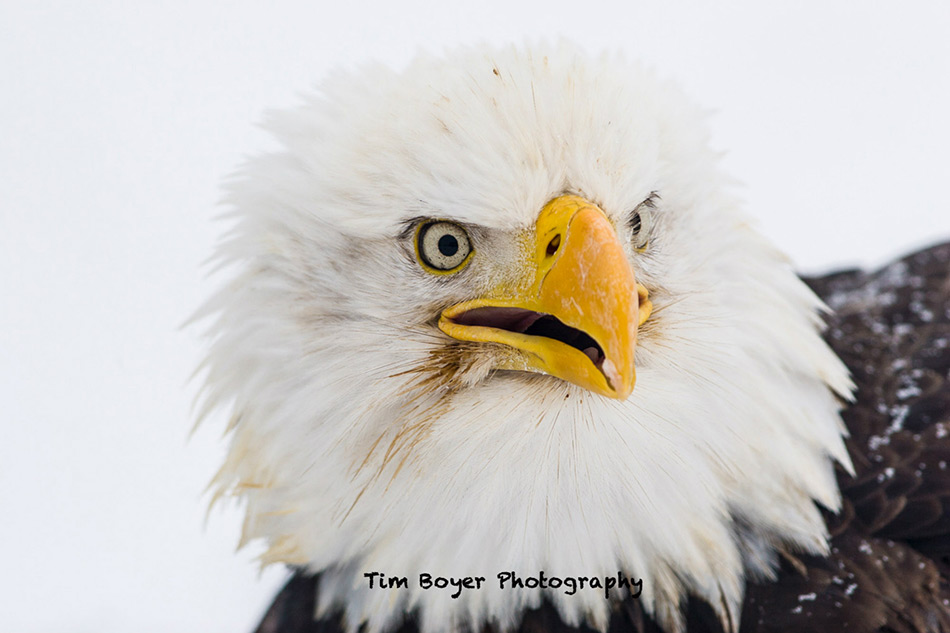 Not satisfied with the sharpness of your bird photography?

Fortunately, there's a number of tricks you can use to avoid blurry photos. And the best part? Each of these tricks is super easy!

Editor's Tip: Find out more about the bird photography workshops Tim leads on his website. 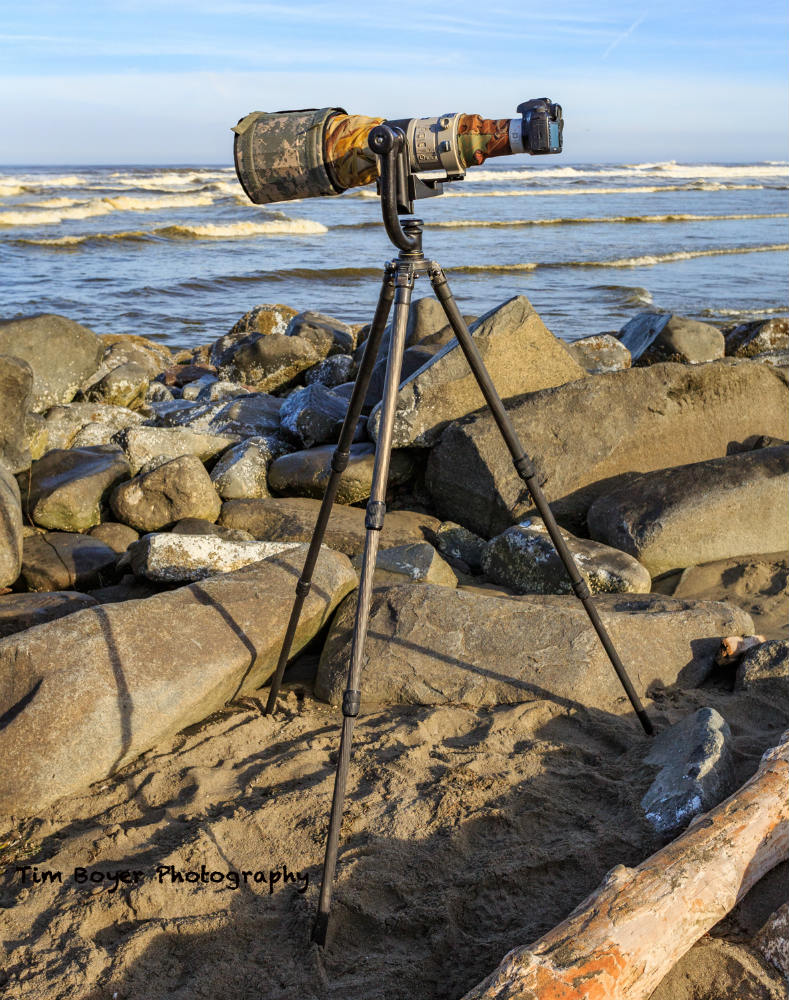 The first tip is obvious but so important. Even with four-stop Image Stabilization or Vibration Reduction, use some kind of a support - a tripod, a monopod or a beanbag if you’re shooting out of the car.

If you can support your camera and lens, you’ll have less vibration and movement, and thus a sharper image.

The three-section carbon fiber tripod shown above is rated to hold up to 26 pounds. The lens, camera, and extender weigh less than half of the manufacturer’s recommendation.

By staying within half the recommended weight limit, you will get solid support from your tripod.

Get a detailed guide for how to use a tripod for bird photography in the video above.

Editor's Tip: Taking high-quality photos of birds from your car is easier than you think. Learn how right here.

Use a Fast Shutter Speed for Bird Photography 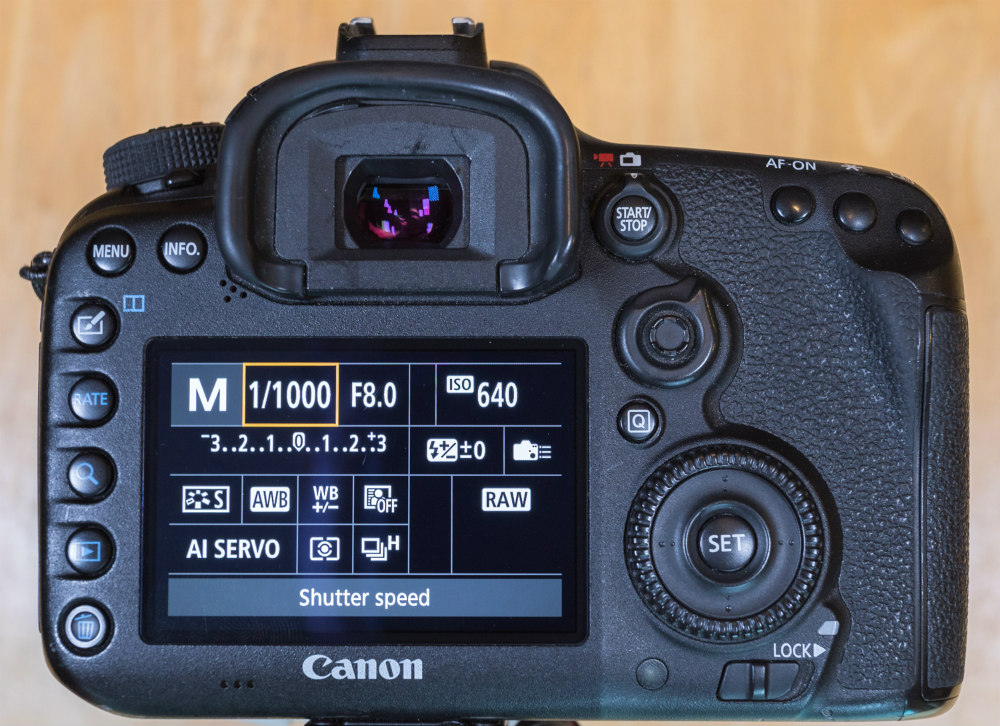 Set your camera up for a fast shutter speed.

By shooting in Manual Mode and setting the shutter speed to 1/1000 of a second or higher, you will get sharper images because a fast shutter speed will stop the action of the bird’s movement and stop any camera and lens shake or vibration.

These settings allow for a fast shutter speed and good depth-of-field, but keep an eye on the ISO so it doesn’t get too high and grainy.

For more details about camera settings for bird photography and getting sharper bird images, check out my video above.

Use a Higher ISO for Bird Photography 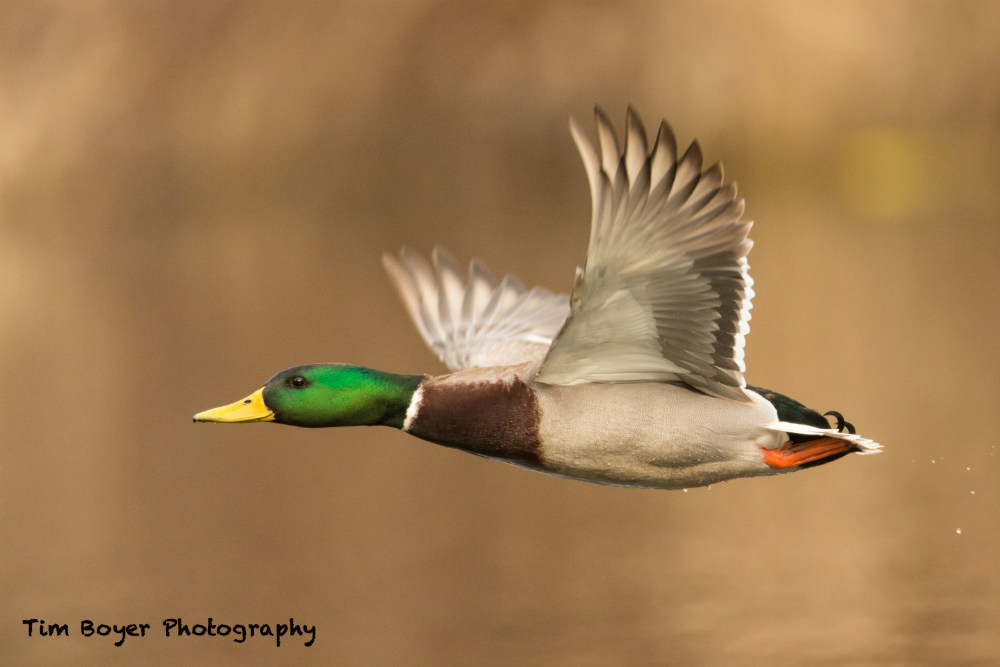 This Mallard flew by and was captured at ISO 3200 on a Canon 5D Mark III.

On a bright day or when shooting in the golden hour, you can push the ISO up so you can increase your shutter speed and or your depth-of-field.

Push the ISO up as high as you can before introducing luminance or digital noise/graininess into the image.

This is a case-by-case decision depending on your camera model and brand. With some cameras, I don’t shoot above 800 ISO while on others I feel okay about pushing to 3200 and 6400 or above.

Handhold Your Camera and Lens 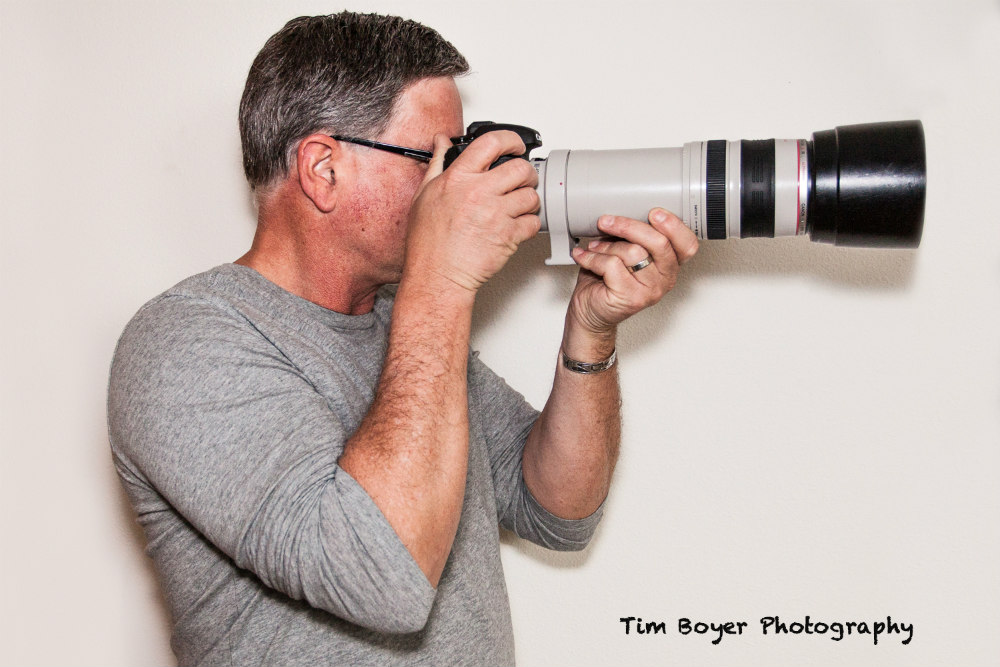 Handhold your camera and lens for maximum stability.

Move your left hand out further so it’s close to the lens hood, as this will make the camera and lens more stable.

If your hands are close together, then the lens and camera can pivot and move around. 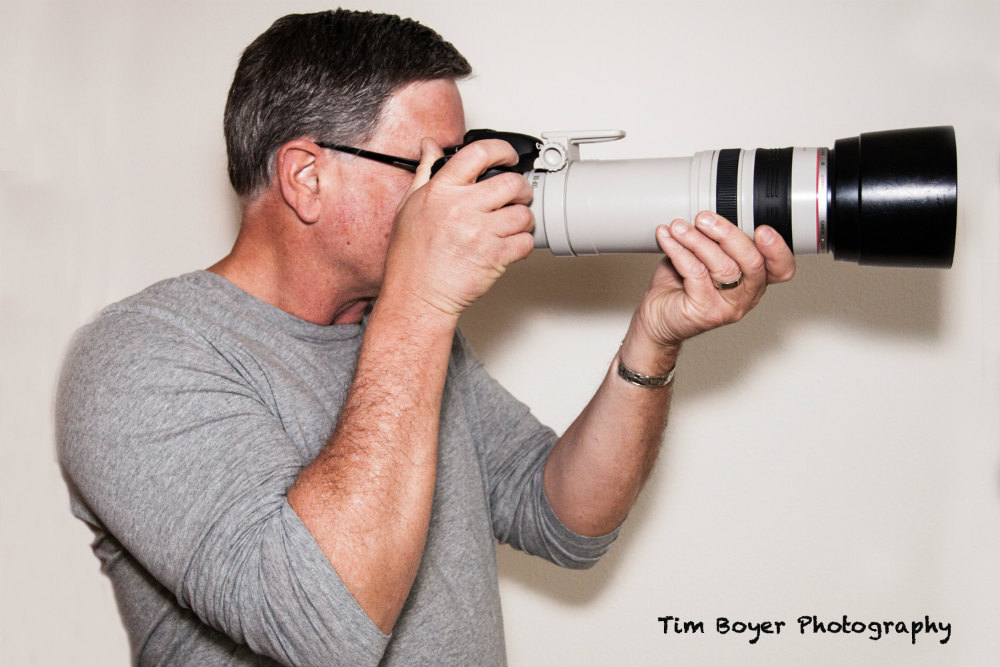 In the first image above, the left hand is pretty close to the right hand holding the camera.

By shifting the left hand out towards the lens hood, the camera and lens are more stable. 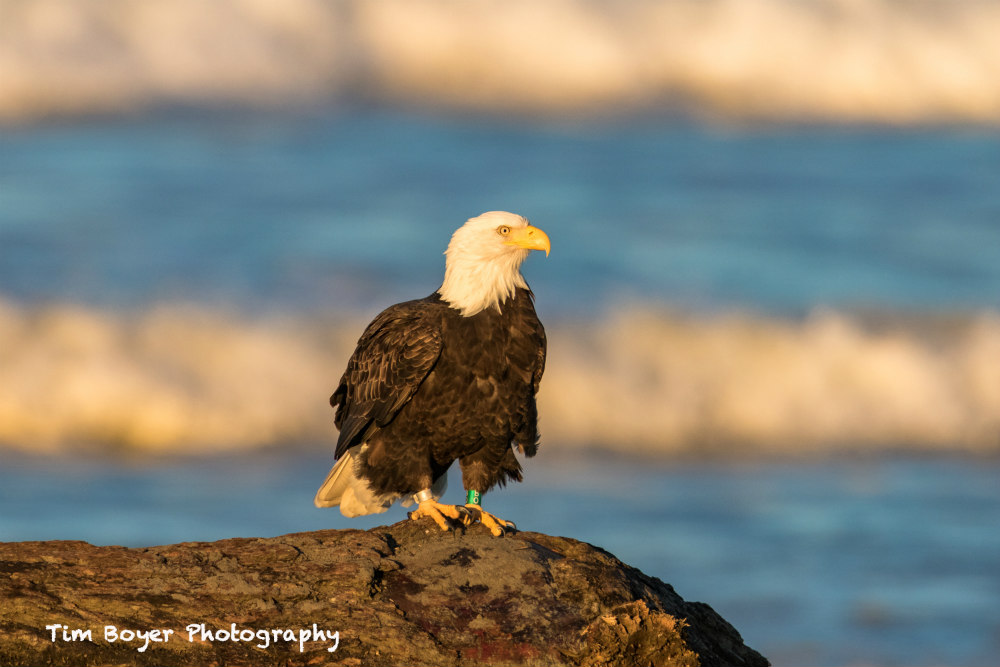 I know the composition isn’t good this way, but your lens is sharpest in the center.  So, get a sharp image and then create your composition by cropping it later in post-processing. 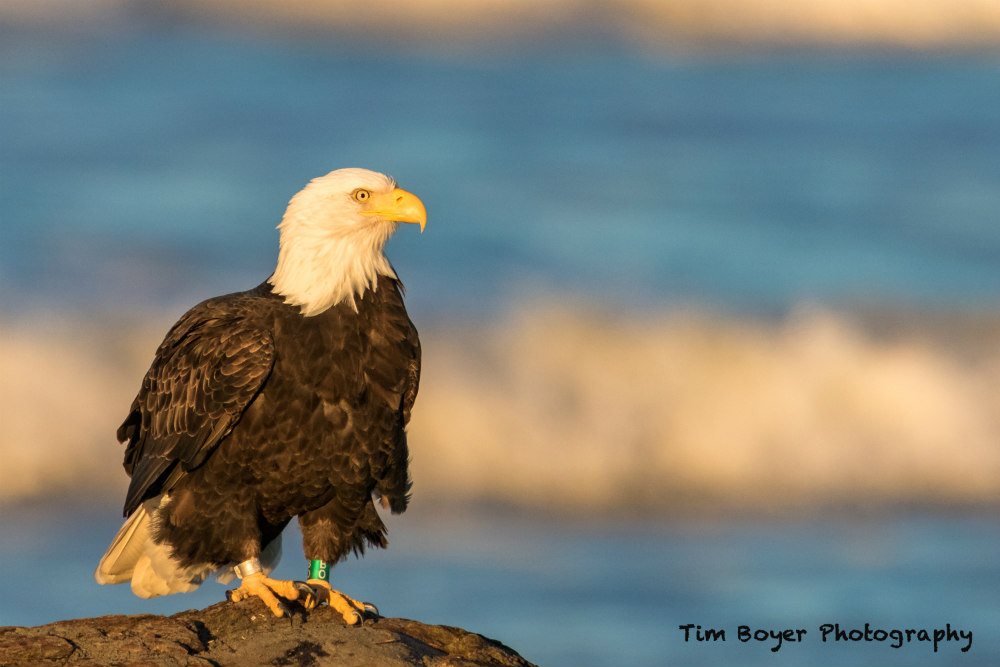 In the first image above of the Bald Eagle, I placed the bird in the center of the frame so I would have the sharpest image possible.

Later in post-processing, I cropped the image for the look that I wanted, as shown in the second image above.

Editor's Tip: Learn More about post-processing and how to get sharp images in Tim's book – Learn the Art of Bird Photography. 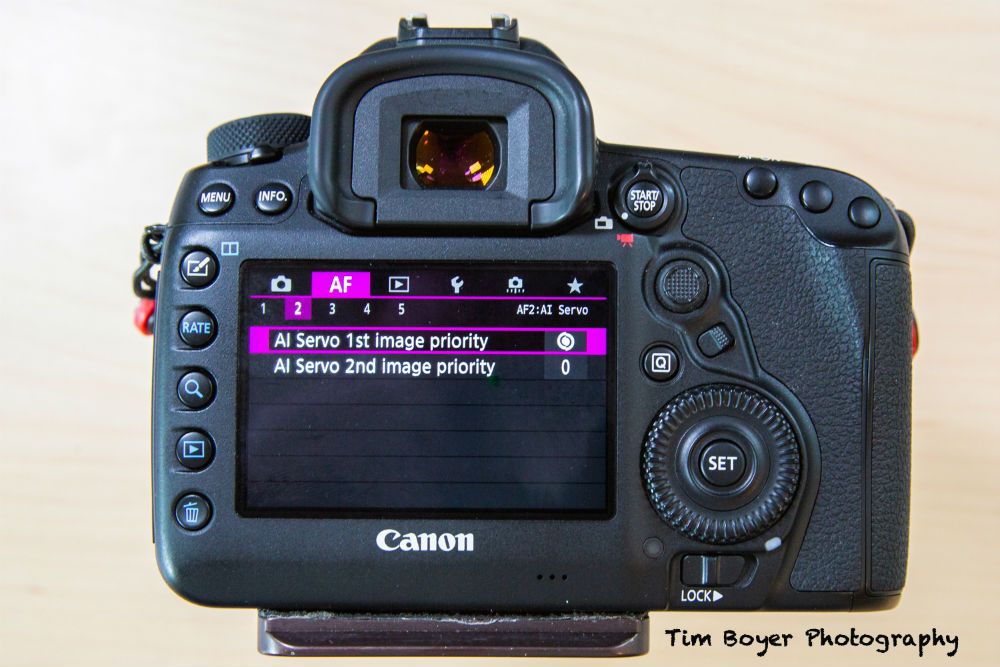 Allow the camera’s AF system to acquire focus by either pausing and making sure the camera has acquired focus or by setting the 1st Image Priority to Focus, so you’ll have the the sharpest focus.

The male Harlequin Duck shown above took off fast. 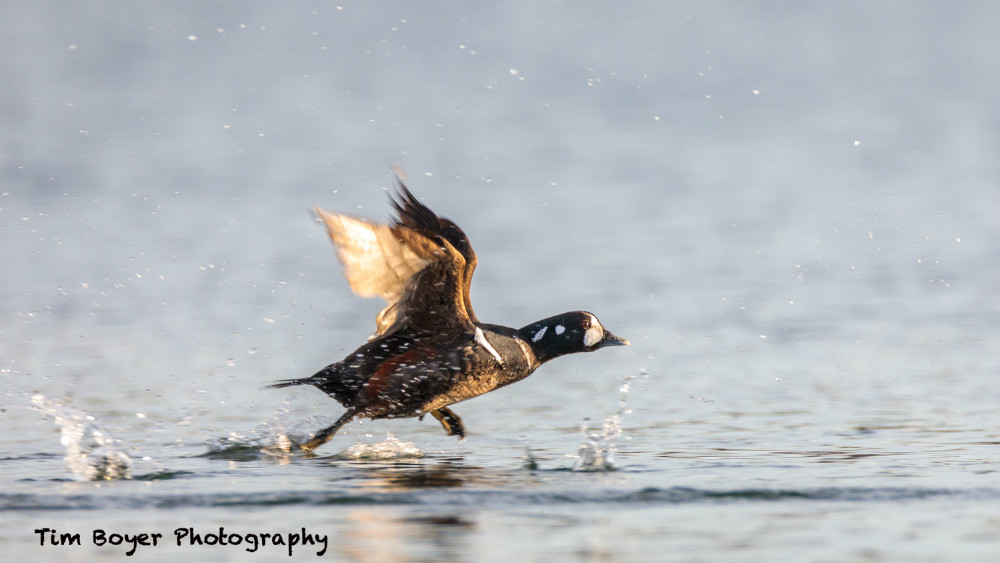 But by having my camera setup for 1st Image Priority on Focusing, the camera didn't take the image until it had acquired focus, thus ensuring the image would be sharp.

Editor's Tip: To learn more about how to set up 1st Image Priority on your camera, watch Tim's tutorial video here. The instructions start at the 5:03 mark. 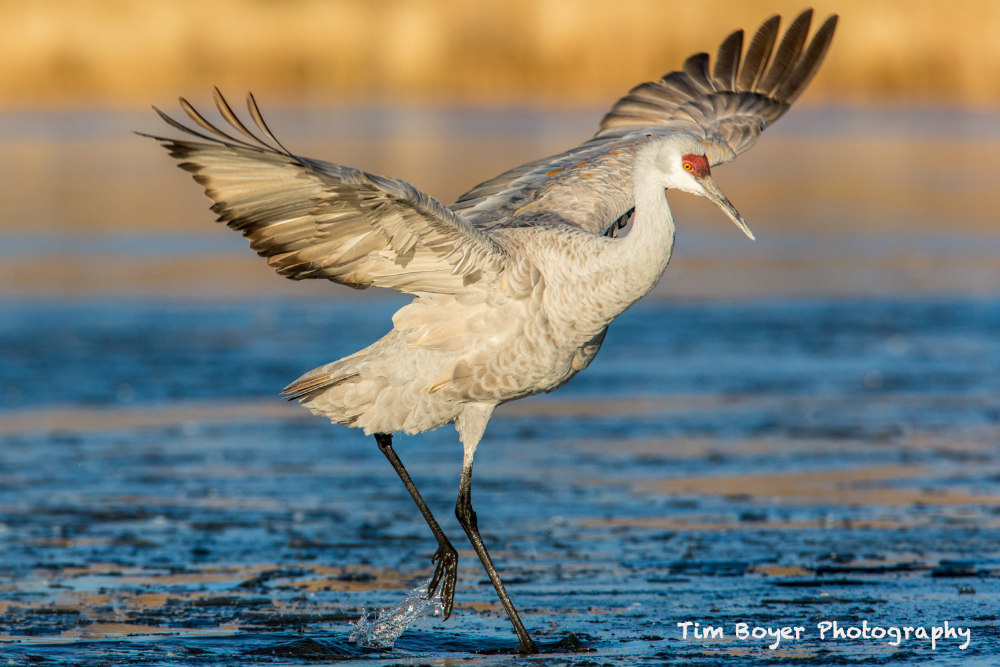 Anticipate the action and shoot in short bursts by letting up on the shutter release so the camera can re-acquire focus.

This is a more intentional way to shoot, and combined with studying the bird and its behavior, you’ll know the signs of when it’s about to fly away.

The Sandhill Crane shown above was having a difficult time walking on the half-water half-ice surface of the pond. When its foot would punch though the ice, it would catch its balance by flapping its wings.

I just waited until I saw the bird drop a little then fired off a series of three or four frames to get all of the wing flapping nice and sharp.

Editor's Tip: Learn more about anticipating action and getting close to birds in Chapter 7: Preparation and Skill Building of Learn the Art of Bird Photography.