A Beginner's Guide to Photographing Birds in Flight 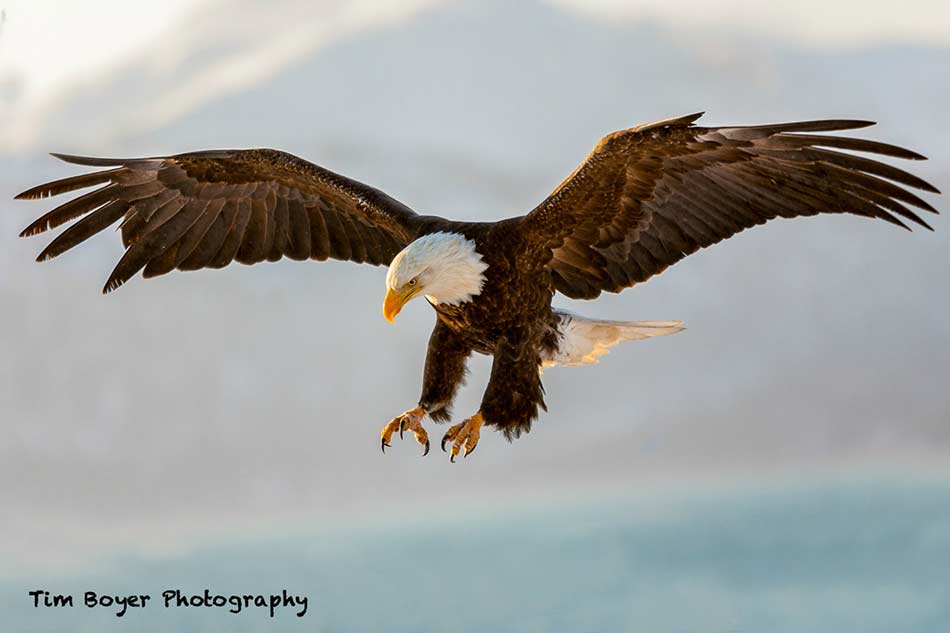 Birds are fascinating creatures to photograph, but it can be very difficult to get high-quality images of birds in flight.

If you've ever struck out on your own and tried your hand at photographing flying birds, you've probably encountered some problems with motion blur, incorrect focus, exposure issues, and so forth.

Recently, I had the opportunity to sit down with Tim Boyer, a master bird photographer, who has honed his craft over years and years of watching and photographing birds.

Here are here are some tips and photos directly from him for photographing birds in flight.

Crank the Shutter Speed When Photographing Bird in Flight 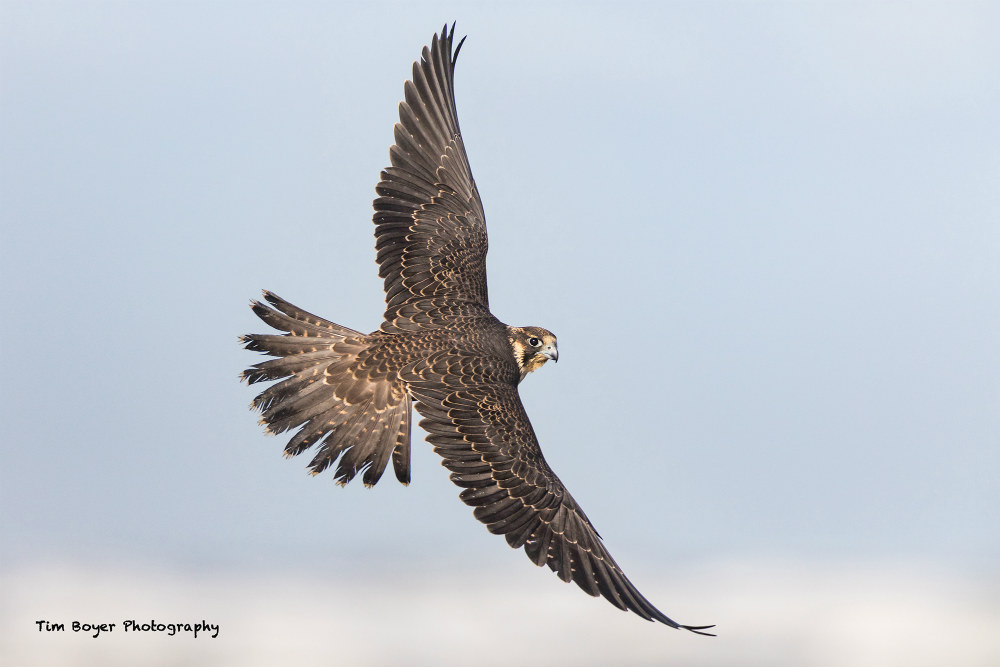 For birds in flight, it’s important to have a fast shutter speed, and maybe some extra depth of field. This will ensure that you get the sharpest image possible.

Typically, though, this means that you have to manage the ISO. If you have a full frame sensor camera, you can shoot in Auto ISO, but if you have a cropped sensor camera, you might want to set the ISO at 640 or 800 to minimize the amount of graininess or digital noise. The more noise there is in an image, the less sharp it looks.

Typically for birds in flight photography, I set my camera to manual mode and set the shutter speed to 1/1000 of a second. I set the aperture to f/8 and the ISO to Auto. If you’re just beginning with birds in flight, you might want to start in aperture priority mode and manually set your ISO to as high as you’re comfortable with depending on the camera you’re using. This will give you the fastest shutter speed possible for the given situation.

See more tips about photographing birds in flight in the video below:

Most pros will tell you not to shoot in aperture priority mode when doing birds in flight, because if the background changes from light sky to dark trees, the exposure will change and the bird could be underexposed. But, when you’re just starting in birds in flight, it’s more important to get a sharp image. Exposure can be adjusted in post-processing, but sharpness – well, not so much.

Learn more about shutter speed in Chapter 8 in Learn the Art of Bird Photography.

Always Be Ready For Bird in Flight 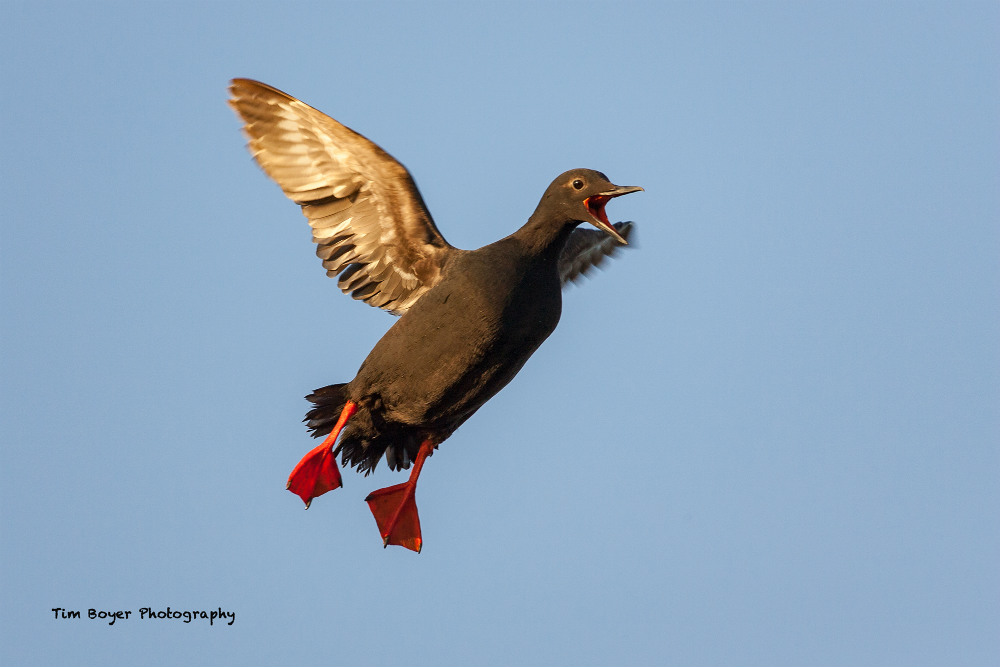 One key to being successful when photographing birds in flight is to always be ready.

Set your camera up in the parking lot and take a test exposure so if anything happens, you’ll have the general exposure set.

Then, if a Pigeon Guillemot or some other birds fly by, you can get the shot, as was done above.

There are two ways to take a test shot in the parking lot.

First, green grass is 18% gray, so you can use it as a gray card, then open up the aperture one or two stops for birds in flight photography as the background will most likely be lighter than the birds.

Second, with the highlights alert feature enabled on your camera, take a few images of a white car and then check the  “blinkies” or highlights and adjust your setting until the highlights are not getting blown out or overexposed. 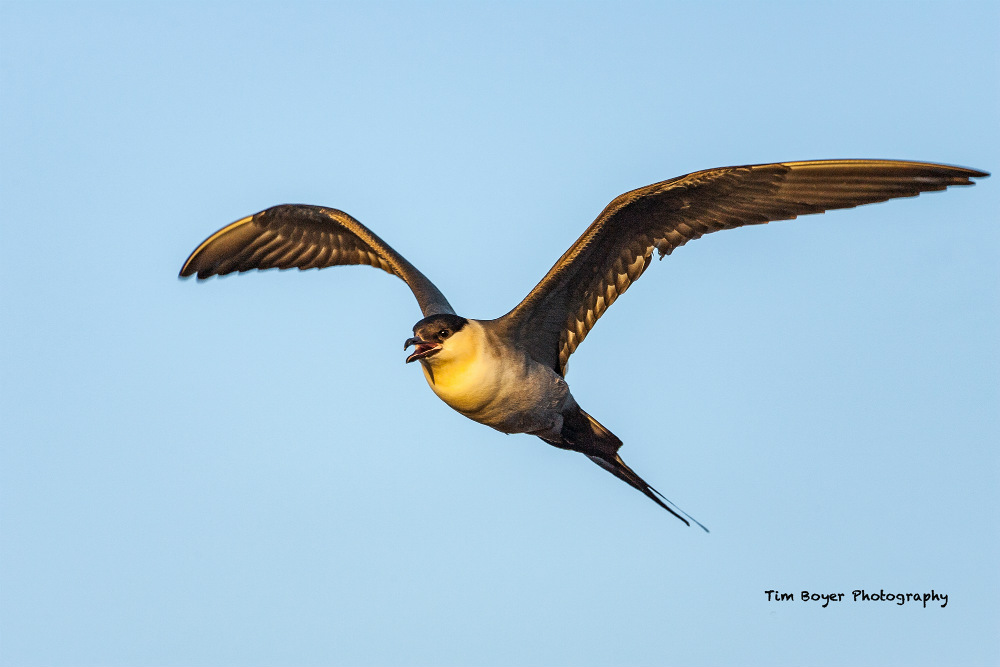 Try to shoot in good light, which means shoot in the golden hour, one hour after sunrise or one hour before sunset. Although, in the summer months, depending on where you live, the golden hour can stretch to several hours long.

This image was taken in Nome, Alaska in June when the golden hour is from 10pm until about 2am.

As much as possible, try to point your shadow at the bird, meaning, the sun should be behind you.

When the sun is behind you, the bird will be nicely lit up, and there will be a minimum of shadows on the bird’s head.

If you can arrange it so the sun is behind you and the wind is coming from behind you, then the birds will be flying into the wind and the light. The birds will be moving slower, they’ll beat their wings more, and you’ll get some great light on the bird with some cool action.

Learn more about this technique in Chapter 7 in Learn the Art of Bird Photography.

Use the Intermittent Focusing Technique to Photograph Bird in Flight 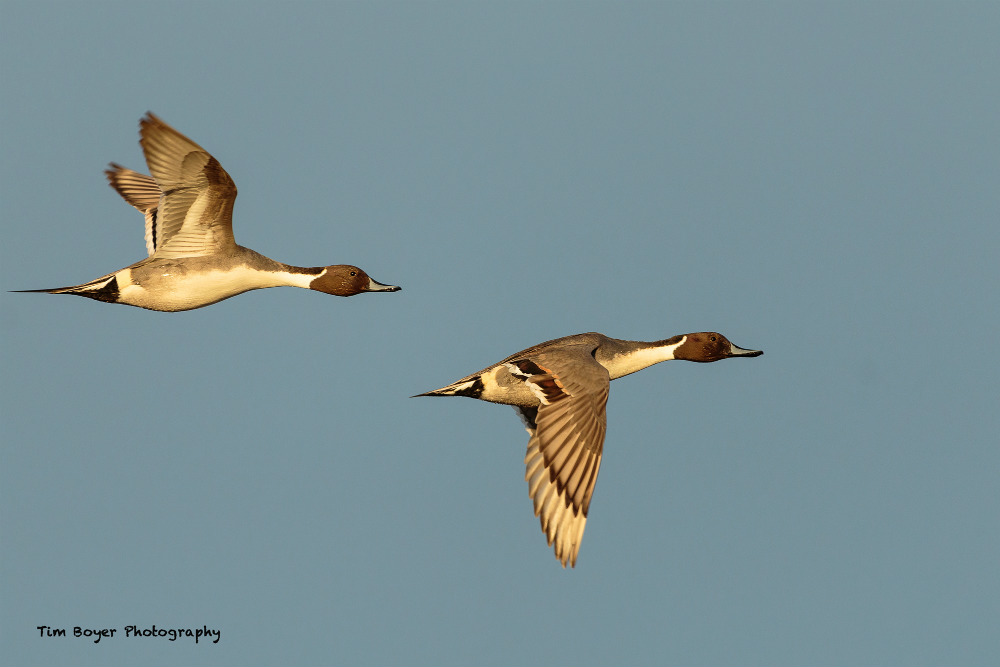 Acquire focus on the birds while they’re flying towards you, and take the shot when they’re at their closest point to you. When the birds start flying away from you, stop shooting, because you'll only get tail end shots, and those aren’t the most attractive.

There’s about a 15 to 20 percent prime shooting area or window in front of you as birds fly by, so get the image as they’re approaching and even with you. Follow through as they fly away, but don’t shoot anymore, you’ll just throw those images away later anyway.

Find a Place to Practice 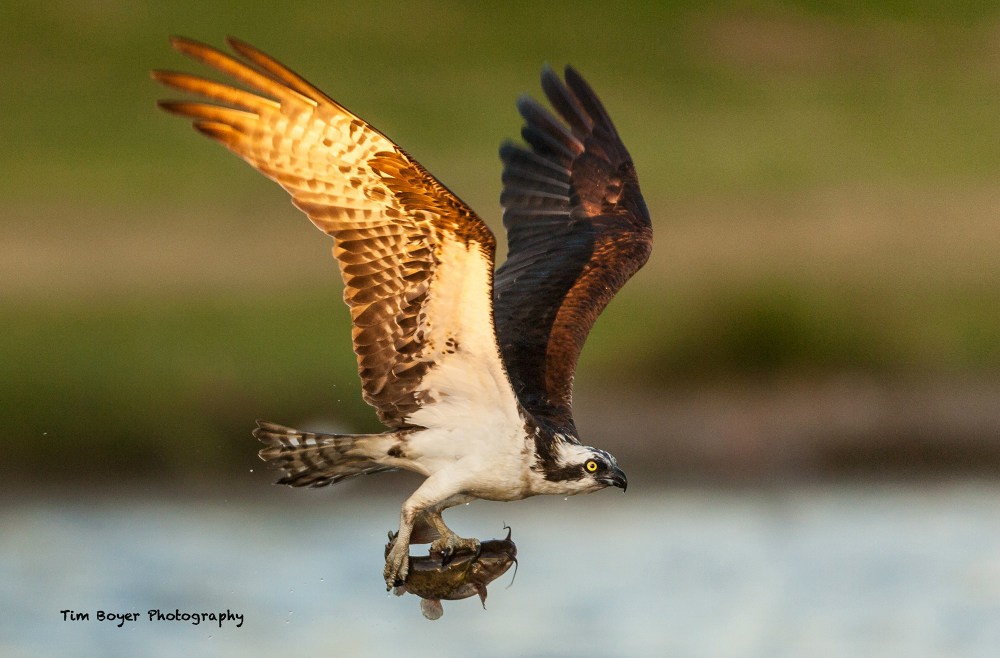 Try to find a place to practice birds in flight photography, whether it’s gulls at a lake or the ocean, or in this case, Osprey feeding for a couple for weeks on some spawning lake fish.

By getting out several days in a row, or as often as you can while you’re learning, you will build muscle memory, you’ll develop the skills of acquiring the bird in the viewfinder, and keeping the bird in the frame as you pan with it as it flies.

By practicing birds in flight photography techniques, you’ll be ready for any action, and thus more successful.

Each chapter of Learn the Art of Bird Photography ends with a section “Here’s What to Practice.”

Try Panning With a Slow Shutter 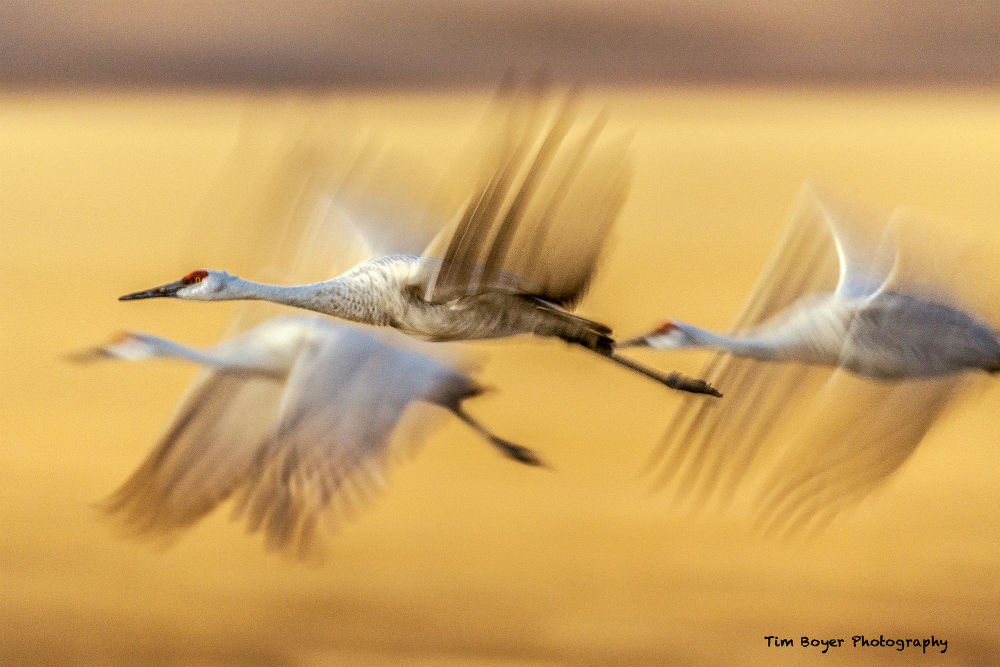 Panning the 600 mm lens with the birds as they flew across a cornfield created this painterly image. The panning action blurred the cornfield, and a slow shutter speed allowed the wings to blur.

To get the shot, I actually watched the crane's flight paths for a couple of evenings, and then I knew exactly where to be just after sunset.

Shooting with a slow shutter speed to blur the wings can add the feeling of movement in your image. Start with 1/15 of a second and then move to 1/30, 1/60, etc.

The Shutter speed will depend on how far away the birds are, how large the birds are, and how fast they beat their wings. It just takes a little experimentation, which is a good thing. 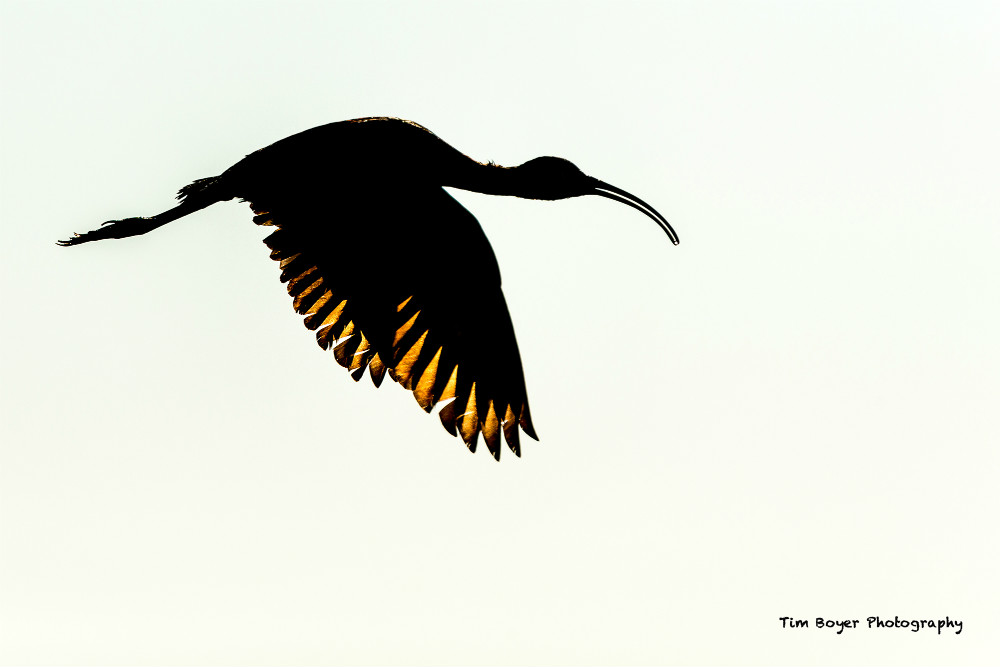 There is also the 180-degree rule in bird photography, and it applies to birds in flight just as much as any other bird.

Shoot with the sun or the light behind the bird and create a bold silhouette. You’ll still want a fast shutter speed, but this is easier since pointing your camera toward the brightest part of the sky will give you a very fast shutter speed. Be careful not to look at the sun through a telephoto lens, though!

When creating silhouettes, it’s always a good idea to underexpose a little to enhance the saturation of the colors. In photo above, there wasn’t much color in the sky, but the iridescent feathers show up a little as the sunlight shines through the feathers.

To get more detailed instruction in the 180-degree rule and shooting silhouettes of birds in flight, be sure to check out the video above.

Editor's Note: If you want to learn more valuable lessons about bird photography, Tim has just released a new book, Learn the Art of Bird Photography. It's a comprehensive guide that takes you step-by-step through every facet of photographing birds, from planning your shoots to processing your images and everything in between.