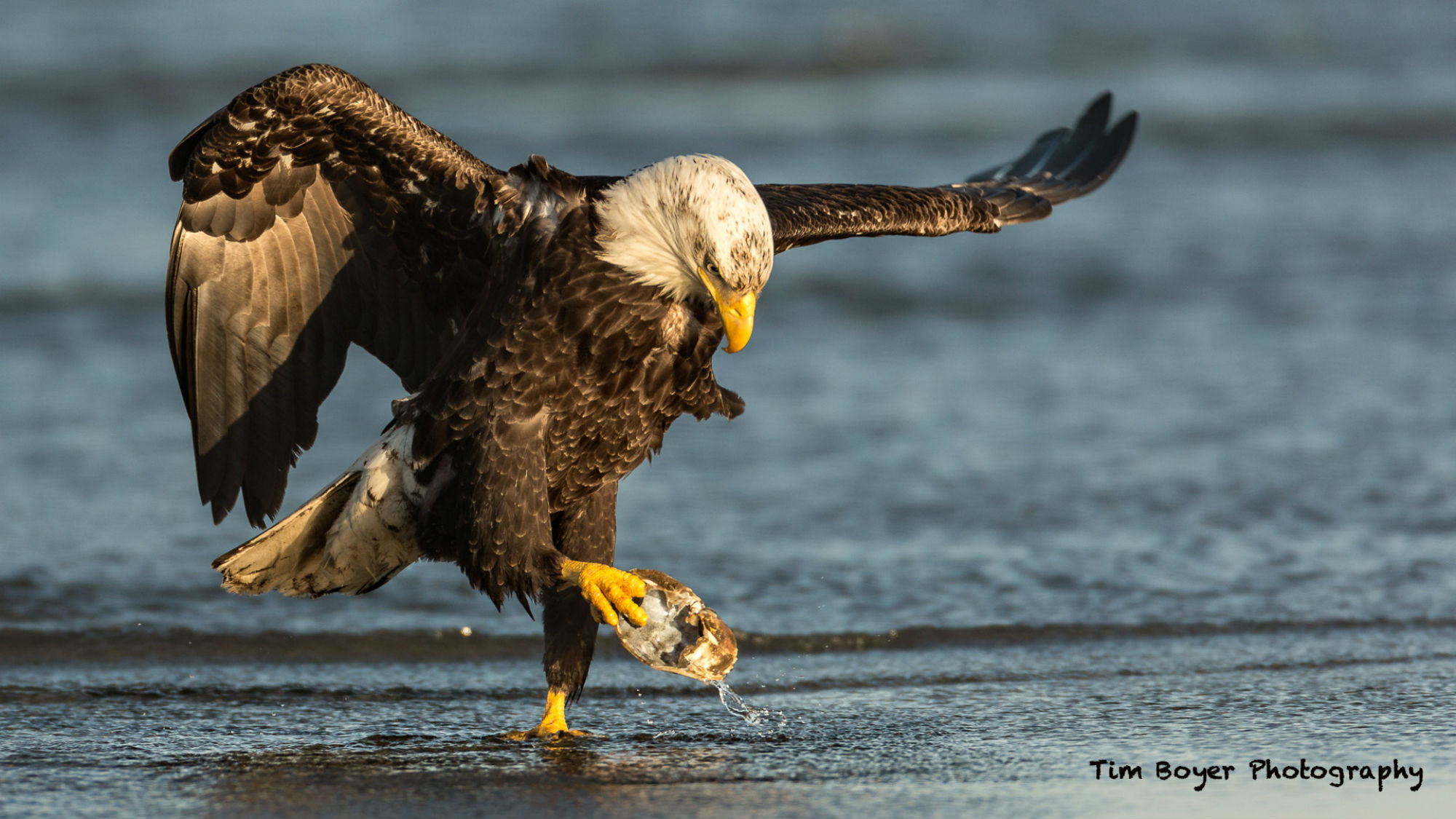 Just like with any subject, when you compose a photograph of a bird, you can enhance its visual appeal by adhering to a set of photography composition rules of thumb.

But sometimes the most difficult part of the process is actually figuring out what those essential rules of thumb might be.

In the video above, Tim Boyer offers his expert advice regarding basic bird photography composition tips.

Have a look at the video, and below, see examples of some of Tim's pointers as illustrated with his own photos. 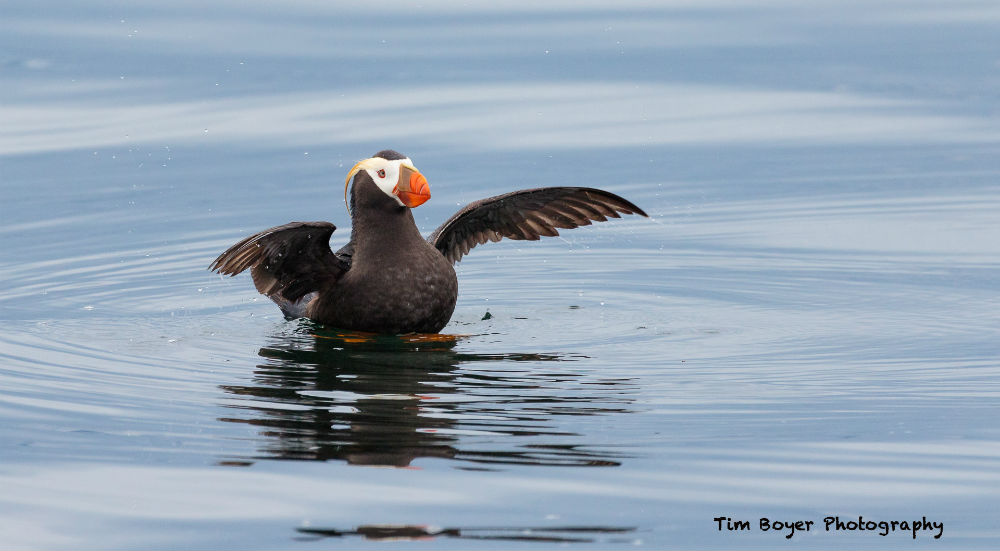 We all know about the rule of thirds and how it helps you create a more balanced and interesting composition.

However, what you need to consider is that you don't have to strictly adhere to the rule of thirds to get a compelling photo.

In the image above, you can see how this Tufted Puffin is offset from the center of the frame, but not so precisely as to perfectly align with the rule of thirds.

As Tim notes in his video, as long as the bird is offset to the side by some degree, you'll have a more successful composition. 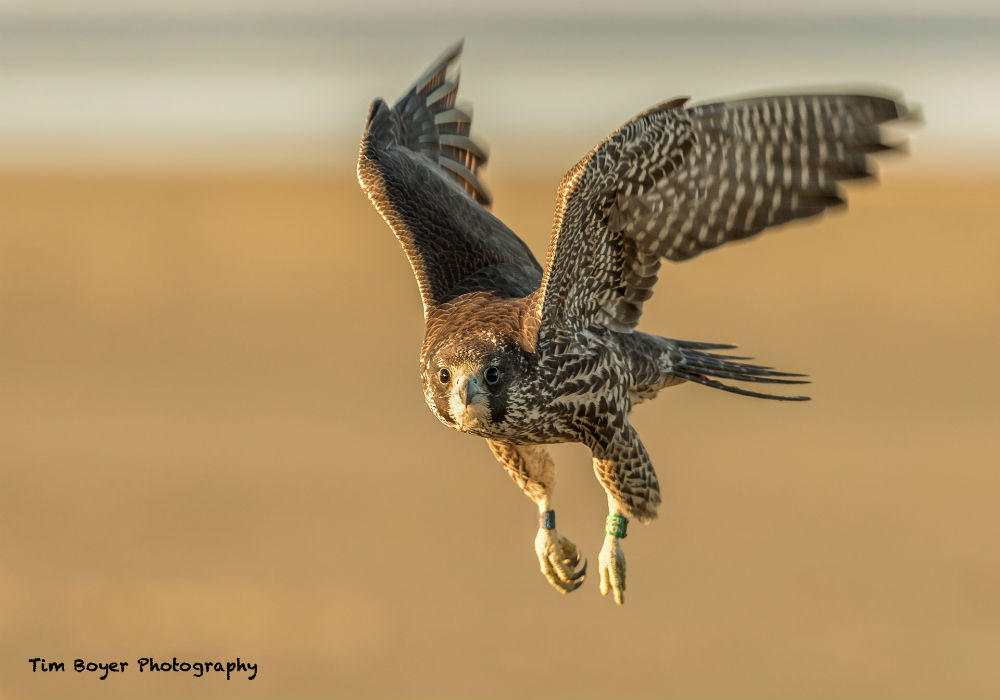 Of course, as with all rules of thumb, there are exceptions.

In the image above, note how the Peregrine Falcon's head is smack dab in the middle of the shot.

But that's okay for a couple of reasons...

First, the bird needs some room to fly, so the positioning of its body slightly to the right of center helps us understand that the bird is moving to our left.

And second, the bird is making direct eye contact with the lens. If you find a bird that's looking right at you, just take the picture!

Keep the Distance in Front of the Bird 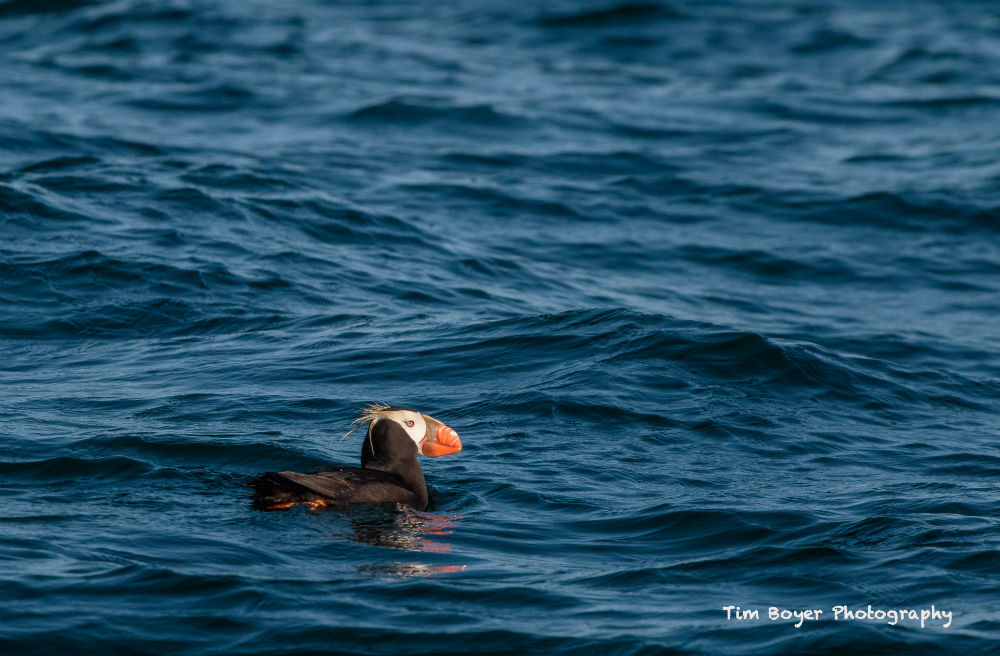 As noted above, when framing up shots of birds, you want to give them room to move.

That is, whether they are stationary and looking to one side as the Tufted Puffin is doing in the image above or they have taken flight like the Peregrine Falcon in the image below, you want to minimize the area behind the bird and maximize the area in front of it. 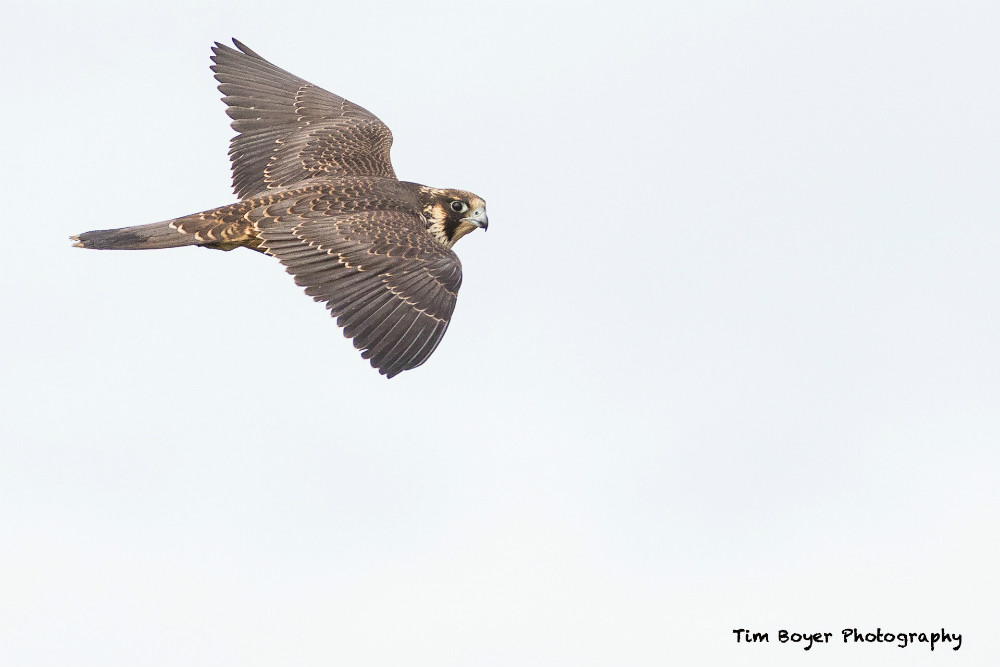 Just imagine if the photo above had been framed with the bird to the far right of the shot.

The bird would feel cramped, would it not? That's not to mention that it wouldn't have anywhere to go in the frame.

Granted, the bird isn't going anywhere in a still photo, but having space in front of it helps us perceive movement, which results in a much more dynamic and interesting image. 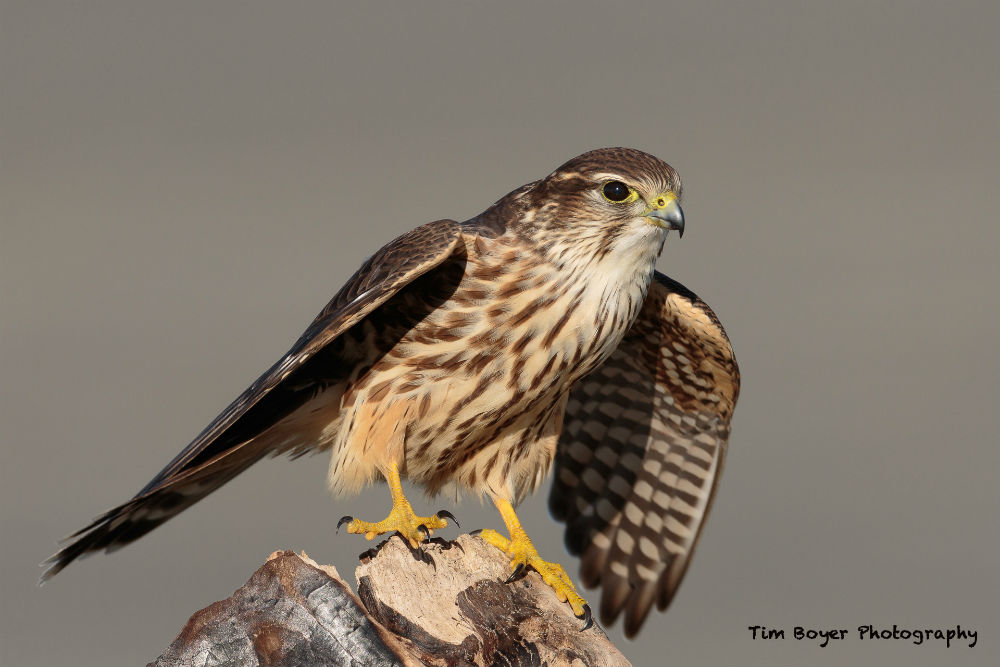 I know when I've tried photographing birds in the past, I found that I was so concerned with getting a great shot of the bird that I forgot about the background.

And though the background certainly isn't the star of a bird photo, it can be distracting enough that it ruins the viewing experience.

On the one hand, you can create a nice, soft background that blurs out the details, as shown in the image above of a Merlin.

But if you find yourself in a situation in which you didn't quite have the shallow depth of field you need to blur the background, you can always work on the background in post-processing.

Alternatively, if you have a decent background that just needs to be cleaned up, you can use Photoshop, Lightroom or another post-processing program to get rid of any distractions.

Have the Bird Occupy About One-Third of the Frame 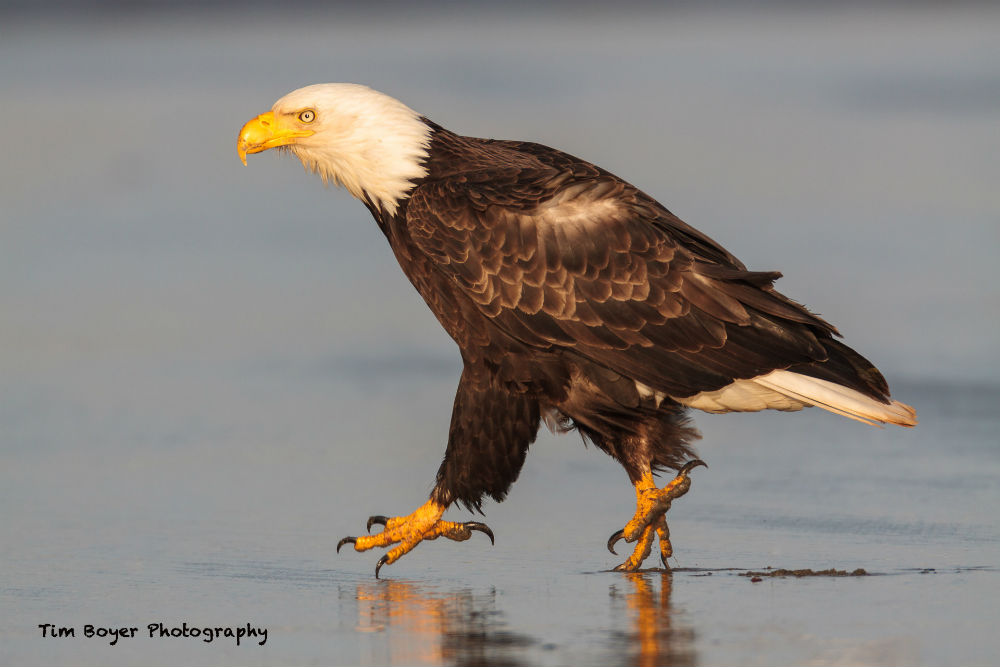 If you aim to have the bird appear in about one-third of the frame, you get compositions like the one above of the Bald Eagle.

On the one hand, the bird is large enough in the frame that you can see details like the texture of its feathers, the sharpness of its eye, and the size and shape of its claws.

But on the other hand, at about one-third of the frame, the bird isn't so large that it feels like it's cramped in the image.

Granted, this one-third rule isn't as much a hard and fast rule and is just a general guideline, so if the bird is a little smaller or larger than one-third of the frame, you'll still be okay. 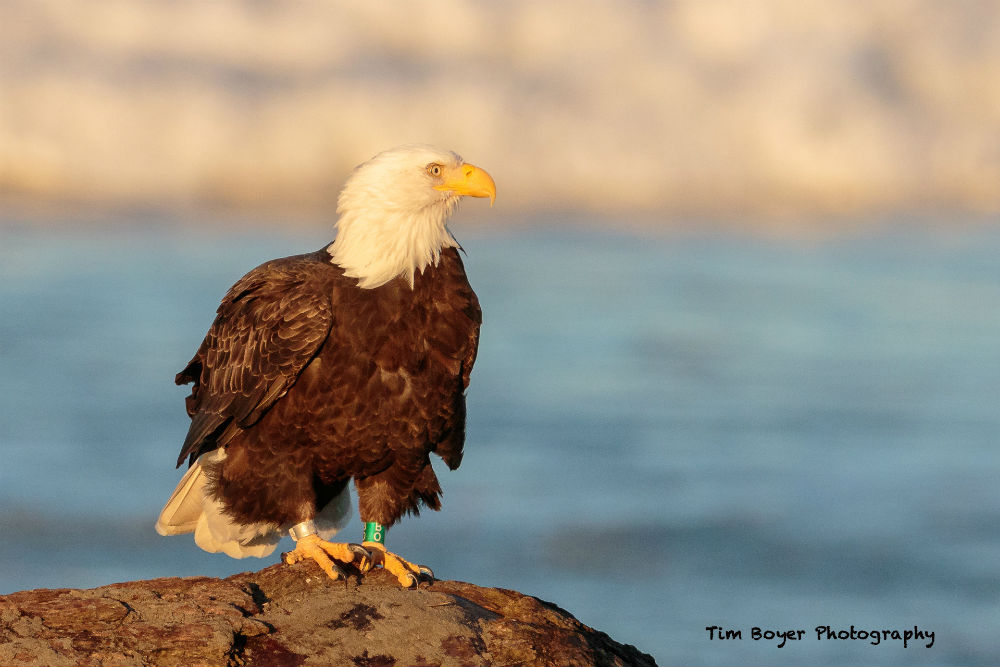 When you take a portrait of a person, you don't want to cut off the top of their head, their arms and hands, or their legs and feet.

The same rule applies when you compose a shot of a bird.

By keeping the entire bird in the frame, you're able to give viewers a complete view of the bird, not to mention create a more professional-looking image.

When body parts get cut off, the shot looks a little careless, as though you didn't take the time to compose it correctly.

So, if need be, zoom out a little bit to get the whole bird in the shot, and you'll have a much better photo!

Remember, for additional tips on composing better bird photos, be sure to check out Tim's video at the beginning of this article. 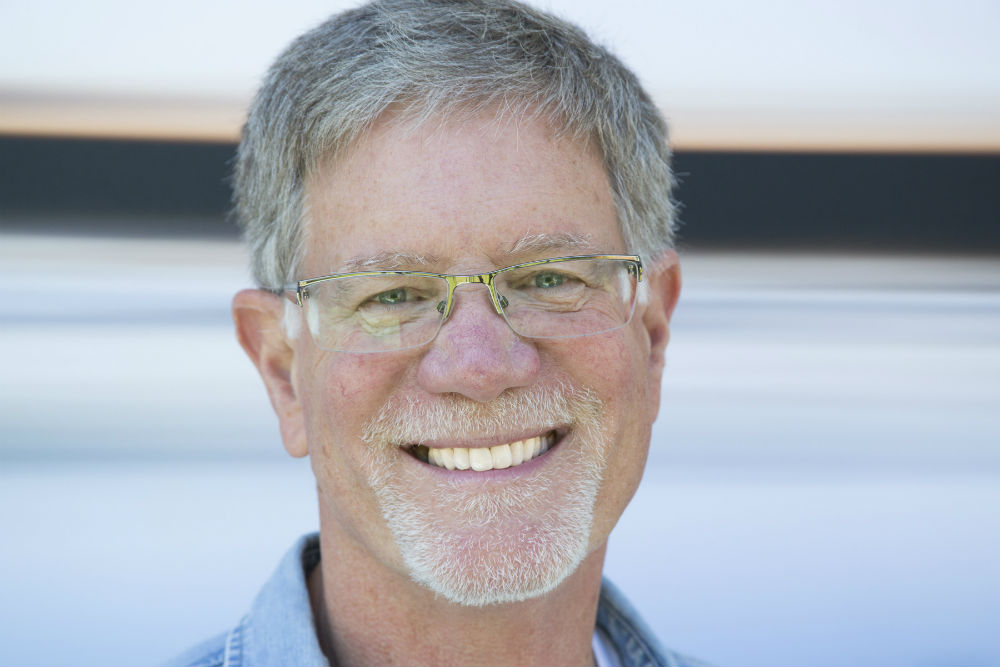 Tim Boyer is an award-winning nature photographer. His images have been published in many bird and nature magazines. He is a full-time photographer and a graduate of Seattle Audubon’s Master Birder Program. He enjoys sharing his knowledge of photography and birds through workshops and presentations. His bird photography workshops are offered in locations where there are lots of birds and thus ample opportunities to learn and practice the art of bird photography. He also has a YouTube channel where he posts weekly bird photography tutorials. Shorebirds are his favorite family group of birds, and he spends a lot of weekends on the Washington Coast.

Tim has a degree in Recreation and Parks Management and had a career as a mountain guide in Alaska, Washington, Canada, Mexico, and Ecuador. He’s been to the top of North America (Denali) six times. Toss in a few marathons, an eighteen-year stint at a large non-profit where he was once the Corporate Controller (which he still can’t believe) and you can see he’s ready for adventure. He’s been a photographer since high school (you know back when they used black & white film) and a birder since college. He always knew he would have three careers, but didn’t think that Bird Photography Workshop Leader/Author would be number three.