5 Photographers on the Biggest Mistake of Their Photography Career

I started to write an article on the biggest mistakes in the history of the photography industry.

Surprisingly, I couldn't come up with enough info. It seems that back in the day photographers weren't willing to admit when they horrifically botched a photography moment.

Thankfully, there are incredible award-winning photographers who are willing to talk about their biggest mistakes now because we can all learn from them. 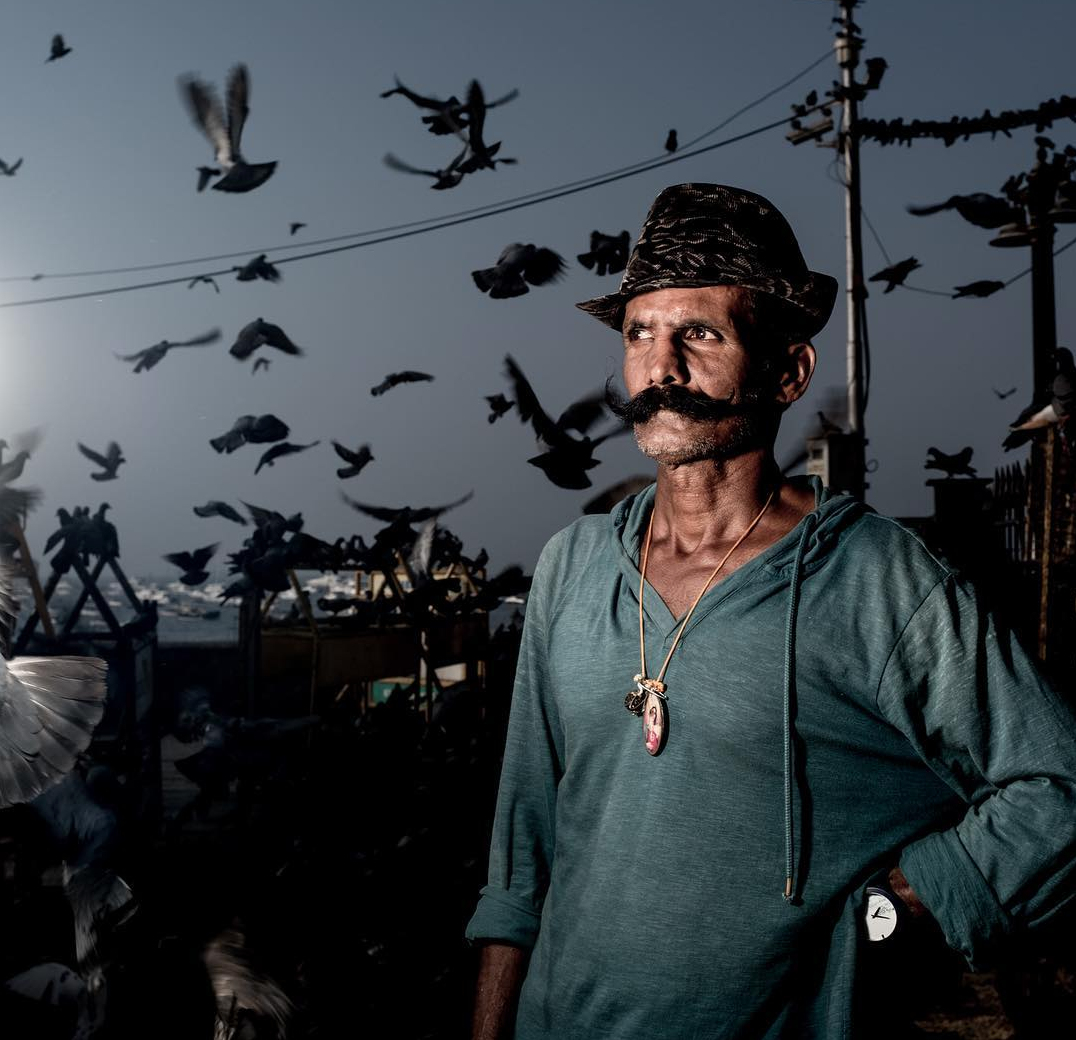 We’ll live out our entire blink of existence on a rock that’s floating around in some sort of incomprehensible cosmic soup. - The picture is too wide to see. The whole thing is too big to feel. - It can feel pointless to aim the spotlight of our attention into a dark patch of sky, but if we do we might notice that our eyes begin to adjust. - All of those wider, disorienting perspectives on the vastness of time and space that have been dimmed to black by the biting light of our daily lives might help us realize what really matters. It might help us all realize that most things don’t. - I’ll be gone for a bit. Time to let my eyes adjust. See you in a month!

Ben Sasso's Instagram features a lot of photos of himself and his partner, probably because the two live in a van together.

But, he's known for his rising stardom in the wedding photography industry.

(New Article) NOTICE YOUR LACK OF CONTROL: Emotions & Attachment Link in stories, duh. Do you choose which emotions you feel in any given circumstance or do they automatically arise within you? Imagine a new way of interacting with your emotions in which, instead of being overtaken and blinded by them, you notice and calmly react to their arising. Replacing an angry mindset with a calm mindset about anger. Also included: Book recommendations from authors wildly more intelligent than myself, and recommendations for meditation apps. Also, disclaimer: I’m not a professional. I’ve never formally studied psychology, or whatever else might lend me any sort of credibility here. I just enjoy reading about, writing about, and meditating on the human experience and the things that unify us. Mainly, our seemingly universal goal of finding some sort of enjoyment in life. - Edited with @heckyeahpresets / 5D IV + 50L - Questions are always welcome! - #visualcoop #tellon #greenweddingshoes #loveintentionally #thatsdarling #littlethingstheory #junebugweddings #elopement #elopementphotographer #elopementcollective #lookslikefilm #intimatewedding #engagementsession #naturallight #watchthisinstagood #chasinglight #makeportraits #portraitcollective #portraitpage #ftwotw #bestwphoto #risingtidesociety #deepfeelingsmp #communityovercompetition #belovedstories #filmpallette #loveauthentic #quietthechaos #adventuresession #photobugcommunity

His wedding photography, like the shots of himself with his significant other, is intimate.

Sasso told FStoppers his "biggest mistake (and regret) is how (he) used to view fellow photographers as competition."

"Sure, we may be in the same field, we may have similar styles and we may even be targeting the same clients, but in the end wouldn't it be so much more enjoyable if we encouraged each other? Wouldn't our work be pushed forward more if we learned from and shared with each other," he asked.

If his lengthy list of publications (including multiple editions of Rangefinder Magazine) and lengthy list of speaking gigs don't speak for the acceptance you can find in the photography community once you stop being cutthroat, I don't know what will.

Will Nicholls spends an inordinate amount of time in trees.

He is BCAP Canopy Access Qualified, which basically means he knows what he's doing dozens of feet up in the air.

It's one of the ways he can make an intense photo like this one feel so easy to take.

Nicholls has won many awards. Of particular note is his 2009 win as the "Young British Wildlife Photographer of the Year." But, he didn't do it without his fair share of mistakes.

"One thing that definitely held back the progression of my photography was being afraid to experiment," Nicholls told SLR Lounge.

Birdman #Mumbai #Fujix100f Spotted this man guarding the side entrance to The Gateway of Mumbai monument in Colaba. This is “The St Marks Square” of Mumbai and the Birdman looks after the two million pigeons that happily pose for photos with the visitors. This is a big job, some of these pigeons have been spoiled by their Instagram fame. They can be divas, no wonder he looks so stressed. Thank you Birdman, we need more people like you in the world. #Fujifilmx_au #Fujifilm#fujifilm_xseries#fujinon #fujixseries#Fujifilmxseries  #x100f #fujix100f #fujifilm#fujifilm_xseries#fujifilm_street#storyofthestreet#streetphotography#ig_street #fujifeed #instagood Want to improve your photography? I'd love to work with you. Check out my Gold Membership, I've created hundreds of tutorials which share all my lighting, posing and editing techniques. We also have a members forum, video photo critiques each month and a live "Ask me anything” Link in bio

Gina Milicia, a lifestyle and travel photographer, had a much different biggest mistake.

Her biggest mistake was very real and very immediate.

"I broke a wedding," she said in a blog post for Digital Photography School.

Alistair Fuji X100F #Glasgow “Beauty is not in the face; beauty is a light in the heart.” -Kahlil Gibran #Fujifilmx_au #Fujifilm#fujifilm_xseries#fujinon #fujixseries#Fujifilmxseries  #x100f #fujix100f #fujifilm#fujifilm_xseries#fujifilm_street#storyofthestreet#streetphotography#ig_street #streetshot#fujifeed #fujiframez#fujilove #ig#portraitphotography#photooftheday l #portraiture#portraitmood #instagood#picoftheday Sign up to the newsletter for great tips, and free Lightroom presets Oh and thanks to everyone who has been sharing the show on social media, rating and reviewing on iTunes. You guys rock. BIG TIME!! Want to improve your photography? I'd love to work with you. Check out my Gold Membership, I've created hundreds of tutorials which share all my lighting, posing and editing techniques. We also have a members forum, video photo critiques each month and a live "Ask me anything”

The fateful day was about 10 years before digital cameras. She was shooting a wedding. She didn't realize until the wedding was over and she had taken all of the shots that her flash tube on her external flash wasn't working properly... it was only emitting about 1/4 of the light it should have been.

She managed to salvage one photo of the dozens she took. Every single other photo was too underexposed to be saved.

However, she said she never would have been so organized as a photographer without this horrible accident.

I have been having so much fun lately incorporating artificial light with natural light. I have been a full time photographer for almost 9 years and still have so much to discover about this medium. I am truly inspired by photography everyday. Let’s never stop learning y’all!!!

Jana Williams is a wedding and lifestyle photographer who made it big.

She's been named among the Top 100 Wedding Photographers in the World 3 years in a row. Her work is featured in Elle, Modern Bride, and Martha Stewart Weddings. She knows what she's doing.

But she didn't used to.

"When I first started Jana Williams Photography, I made the mistake of trying to be like other photographers," she said.

One of my most fashionable brides just launched a new jewelry line @armcandybykelly swipe right to see a few goodies I received yesterday. Everything is customizable, like a little initial for your bridesmaids💕 I love you Kelly and love your pieces! Congrats and I am thrilled to see all the greatness coming your way!

"I was driven by fear and competition," she continued.

"I believe that you get what you give," she said.

Erzincanli is a very specific type of photographer; he focuses on retouching.

His retouching talents are best used in advertising, and the fashion and sports industries.

His work has been featured in Maxim and Cosmopolitan, as well as publications around the world.

Erzincanli also writes for FStoppers and admitted he accepted all work that came his way in the first few years of his photography career.

Saying "yes" too often seemed to be a big issue with most photographers who were willing to write their harrowing mistakes online.

Put the biggest mistakes of your career in the comments, if you dare!