This week in PT360 we’ve amassed some of the more unusual news and notes from the photography world. First, we go to Wisconsin, where legislators are considering making wildlife photography illegal. Then, we head to Taiwan, where a man’s love of photography caused his wife to divorce him. Next, we check out the Rumor Mill, which has details on Canon’s new full-frame mirrorless camera, as well as GoPro’s stunning new HD quadcopter. We’ve also got a sneak peak at Polaroid’s new camera/printer combo, and a fun new editing tool from Palette. And, as if that wasn’t enough, we also highlight a photo series that combines Renaissance-era art and mechanics in an auto shop. You don’t want to miss it! 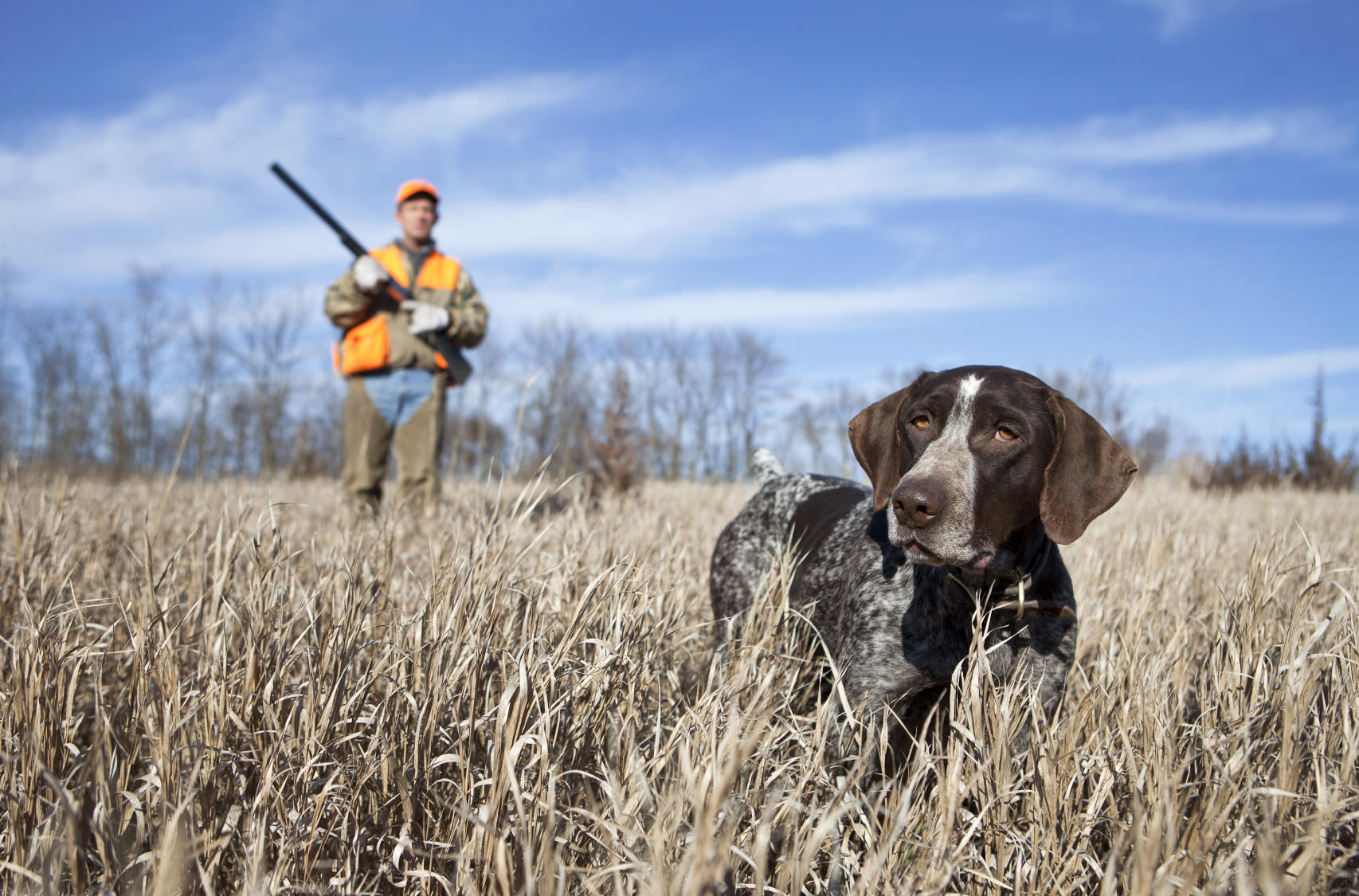 In odd photography news, the “Right to Hunt” bill before the Wisconsin legislature could have an enormous impact on how wildlife photographers operate in that state.

The purpose of the bill is to ensure that there are fewer obstructions in the pursuit of fishing, hunting, and trapping activities. The bill’s authors believe that wildlife photographers are one such obstruction, because the proposal makes it illegal to photograph hunters.

The proposed fines for photographing hunters are in the hundreds of dollars. In some cases, photographers could even be jailed simply for being in “visual or physical proximity” to someone engaged in hunting activities.

The bill was proposed in response to the actions of a Wisconsin group that calls themselves Wolf Patrol. Members of the group are opposed to the practice of using bear bait for hunting purposes, which is legal in Wisconsin, but which also attracts gray wolves. To help protect wolves, the group goes out to photograph and videotape hunters who use bear bait traps.

Unsurprisingly, hunters that have been photographed and videotaped did not appreciate it, thus, the proposed bill before the Legislature.

It will be interesting to see whether or not the bill passes, to say the least.

Additional information about the situation in Wisconsin is available on Yahoo News.

Man Served With Divorce Papers; Wife Cites His Love of Photography as Reason 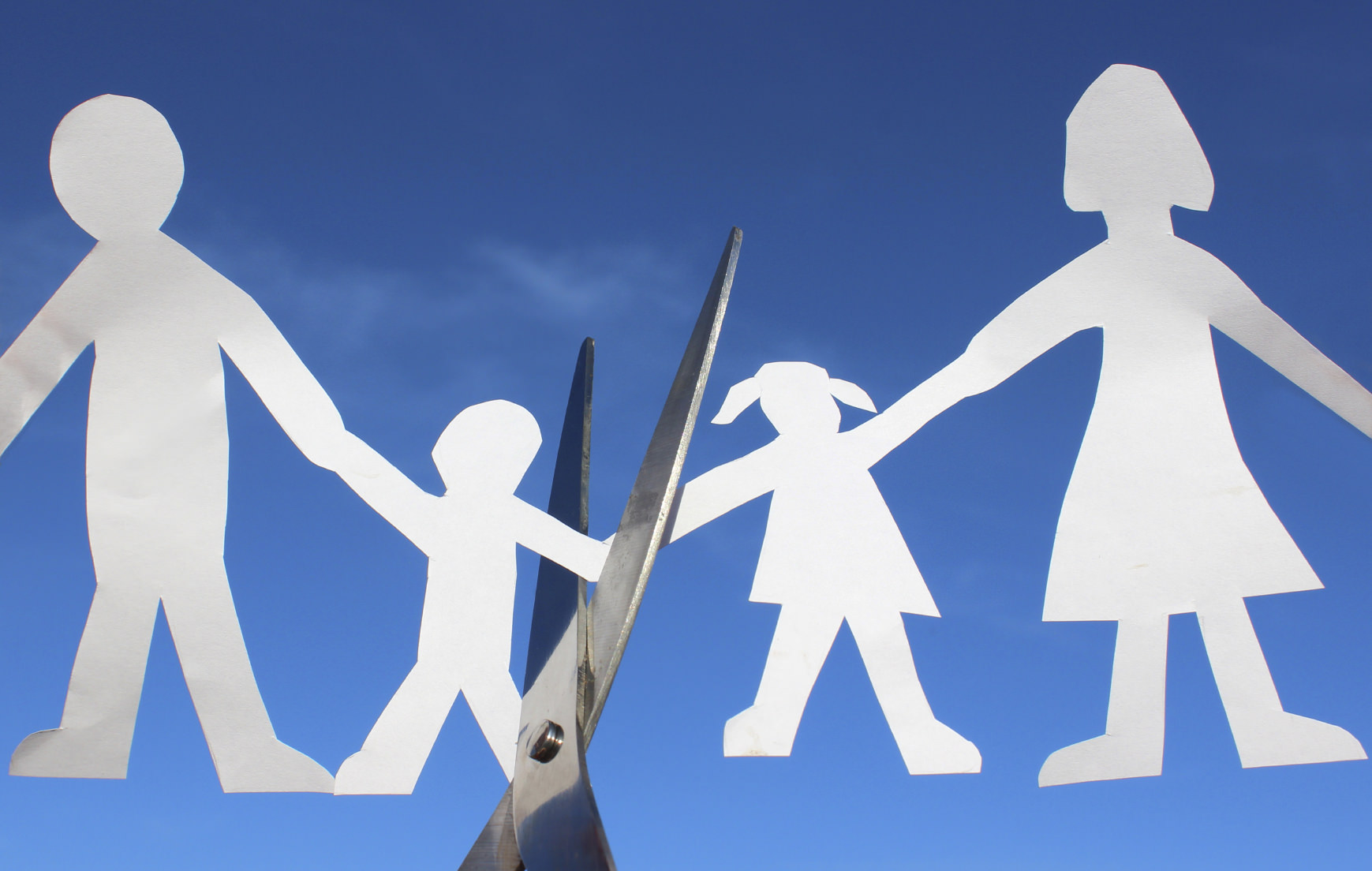 We often hear of the benefits that photography offers to the world, like bringing attention to events of concern like global warming.

But what we often don’t hear about is photography ending someone’s marriage.

In an odd case, a Taiwanese woman filed for divorce from her husband, claiming his obsession with photography was one of the primary reasons their marriage was on the rocks.

The disgruntled wife cited a number of examples in which her husband’s love of the lens went to an unhealthy level, including asking a physician to give their infant child a second shot so he could capture the moment with his camera. In another episode, the wife claims to have found her husband taking photos of their crying baby at 2 AM rather than seeking to comfort the infant.

Clearly, the husband was taking things a bit far. Maybe he will use his camera to document the divorce proceedings too!

Get the full story on PetaPixel.

Canon May Have a Full-Frame Mirrorless Camera On the Way! 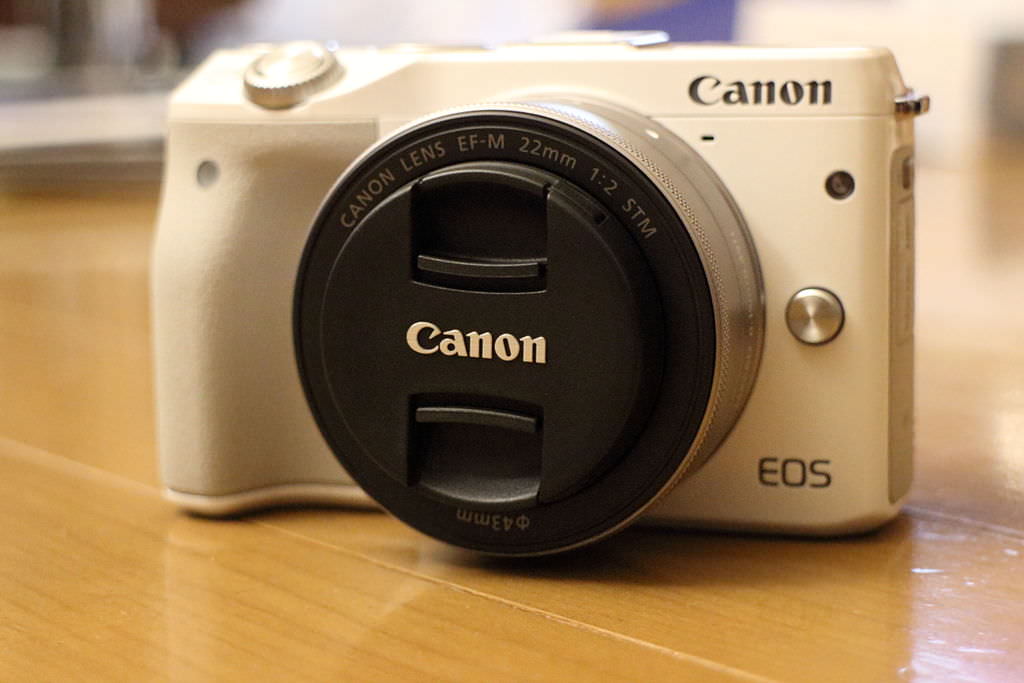 There are multiple reports on the web that Canon is going to up its game in the mirrorless, full-frame market in the coming months, likely in an effort to compete with Sony, which has several such offerings already available.

Canon Rumors reports that Canon is actively developing a full-frame mirrorless camera, but that it will be based on an APS-C EOS M camera that will debut first. The full-frame camera would have some variation of the EF-M mount found on the EOS M, but would require revamped lenses because of the crop factor of the EF-M lenses.

There isn’t a timeline for the release of this rumored camera, but it is exciting news nonetheless for Canon enthusiasts!

According to Photo Rumors, GoPro will announce its consumer-grade HD drone in the first half of next year.

To build the anticipation, GoPro released footage taken from a developmental model of its quadcopter, and the results are pretty amazing.

As the video description states, the onboard HD camera utilizes a new stabilization system that makes for incredibly smooth video. It’s so smooth, in fact, that no post-processing stabilization is necessary.

If this is what they can do at the prototype stage, just imagine what the final product will be able to do! 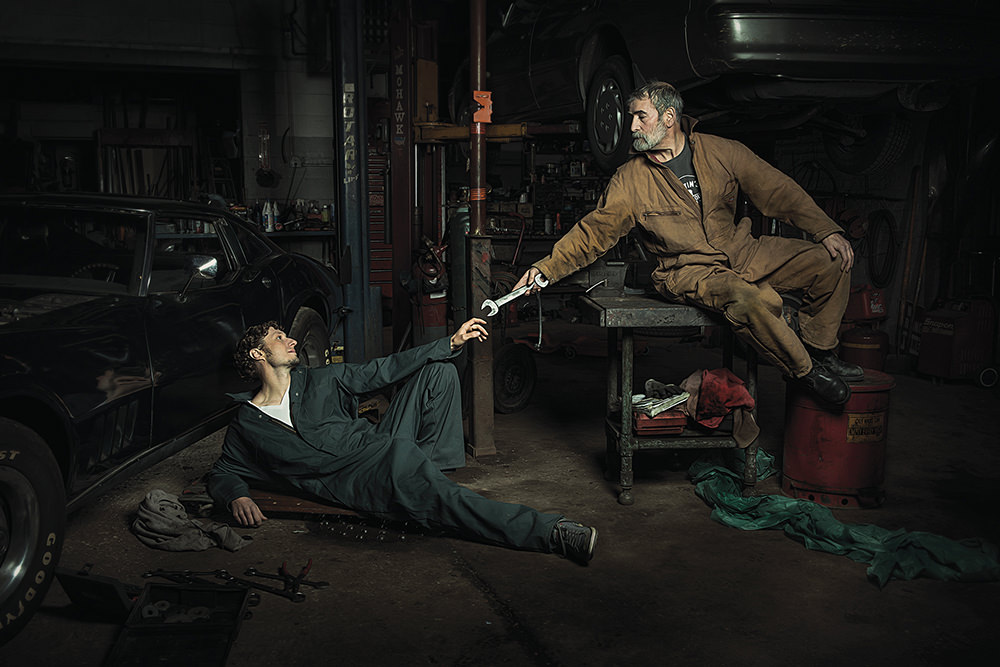 Yep, someone actually posed big, burly auto mechanics as if they were in a Renaissance painting.

The project is the brainchild of Chicago photographer Freddy Fabris. Freddy has a background in painting and long wondered how he could give a nod to classic artists like Da Vinci and Rembrandt via his camera.

What has developed is his Renaissance Series of photographs that include tableaus that are characteristic of such seminal Renaissance-era works as The Last Supper and The Creation of Adam.

Sure, the photos are completely absurd, but the level of skill required to create these photos is absolutely astounding. Fabris’ use of light is especially striking, giving each photo a greater sense of grandeur.

What started out as a personal project of admiration for Renaissance-era art has exploded into a series of photos that have garnered Fabris a whole slew of accolades, including the 1st Place International Color Award.

For further details about this project, and to inspect the photos from the series, visit Colossal. 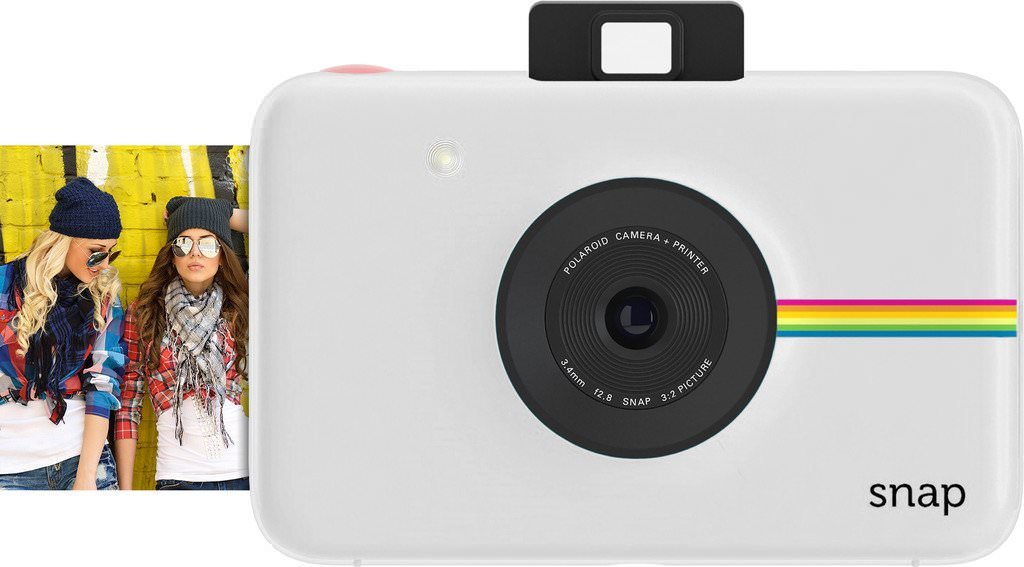 If you thought that Polaroid was dead, you’re dead wrong!

There’s been a lot of nostalgia the last few years for Polaroid and other instant-film cameras that harken back to the good ol’ days when digital photography wasn’t even a thing yet. To capitalize on that nostalgia, Polaroid has introduced a new product called the Snap.

The Snap is an all-in-one camera and printer. The 10MP camera has a fixed f2.8 lens, so there’s no zoom. There’s no LCD screen either but there is a pop-up viewfinder. There are three camera modes – color, black and white, and vintage sepia – so you can add an artistic touch to the photos you take. A MicroSD card slot allows you to save your images for later, and the timer function allows you to get your friends and yourself into a shot with ease.

Photos are automatically printed once they’re captured. The images print on 2x3” paper using Zink Zero Ink technology. There are no ribbons or ink cartridges to worry about! Instead, images are printed on Zink paper, which runs $14.99 for 30 sheets on Amazon.

This little camera/printer is a fun choice for on-the-go memory making and on-demand instant prints. It’s currently on sale on Amazon for $99.99. 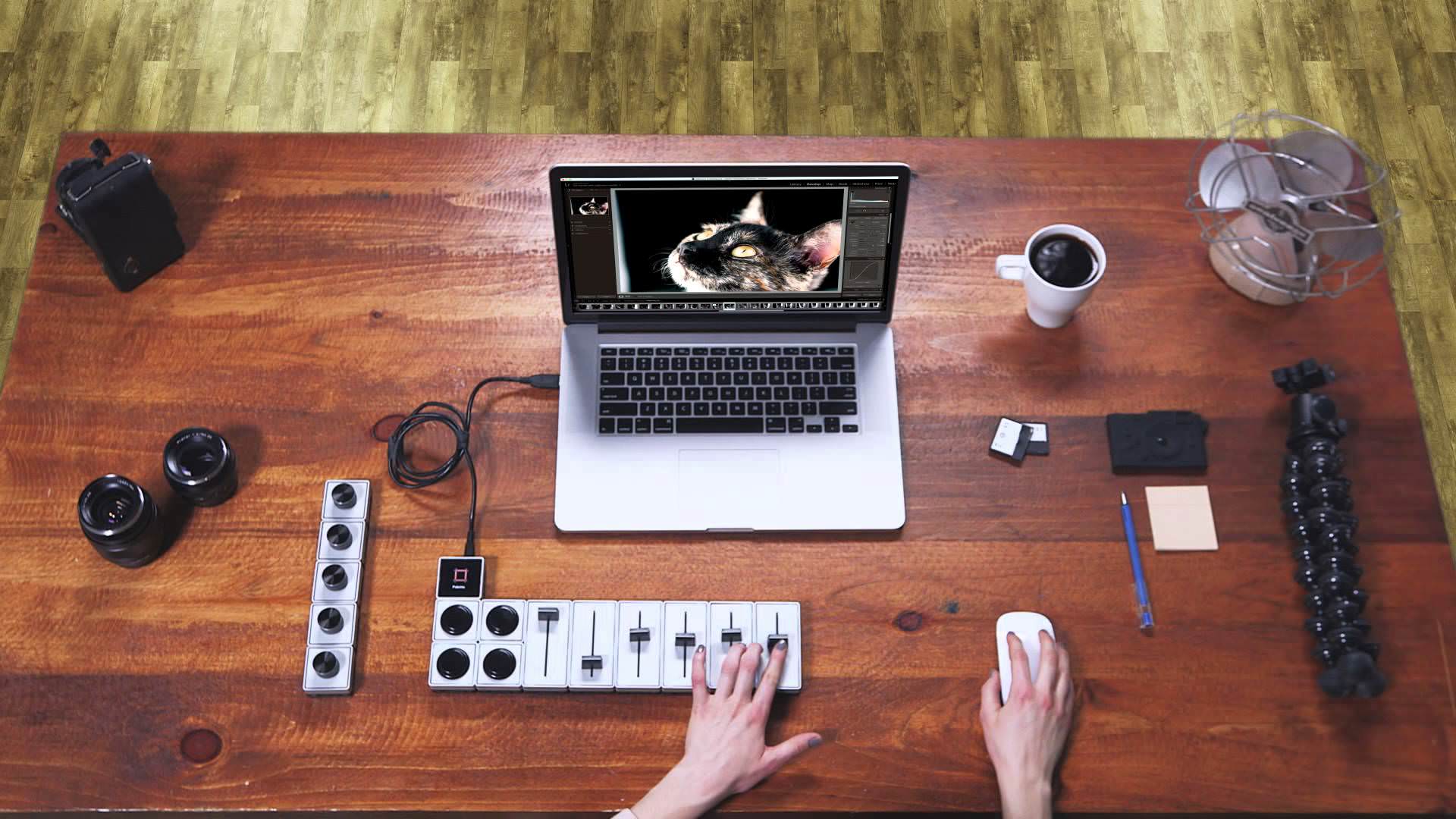 If you’ve ever wondered what it would be like to edit your photos using dials and knobs, just get yourself a Palette.

What looks like an audio mixing board is actually a highly customizable input device for editing photos in Photoshop and Lightroom.

Setup is easy: just download the app to your laptop, plug in the central module, and then attach whatever other modules you wish to use to the central component. Modules snap together with magnets and can be arranged in virtually any way you please.

From there, all you have to do is assign functions to each module. There’s buttons, sliders, and knobs, so the hardest part is figuring out which editing function is best suited to what kind of output.

Dials are certainly most useful for detailed edits, with their pinpoint accuracy helpful for changing things like levels or sharpness. Sliders are better suited for large changes, while the buttons seem to be best used for major functions, like skipping over images in Bridge.

Palette is not cheap (starter kits are $199.99), nor is it very portable, but it isn’t just a novelty item either. With a highly customizable workflow, you can easily create an environment in which editing your photos is even easier than doing so with traditional computer controls. 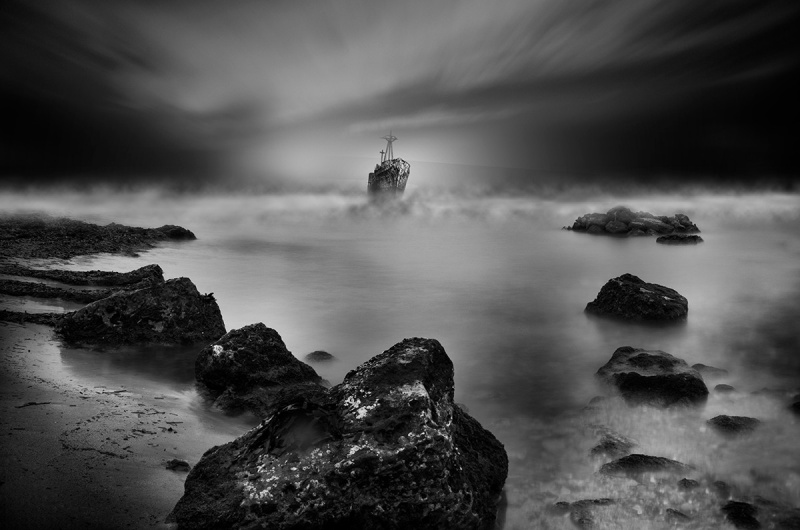 This week’s photo of the week is a stunner! Entitled Journey’s End, this incredible long-exposure photo was taken by Photography Talk user William Sdranis. The photo definitely has a haunting vibe with the ship appearing out of the fog and is quite ethereal too with the misty appearance of the water. The black and white composition is a nice touch as well and lends to the incredible moodiness William was able to capture. Be sure to visit William’s PhotographyTalk profile to see more amazing images!