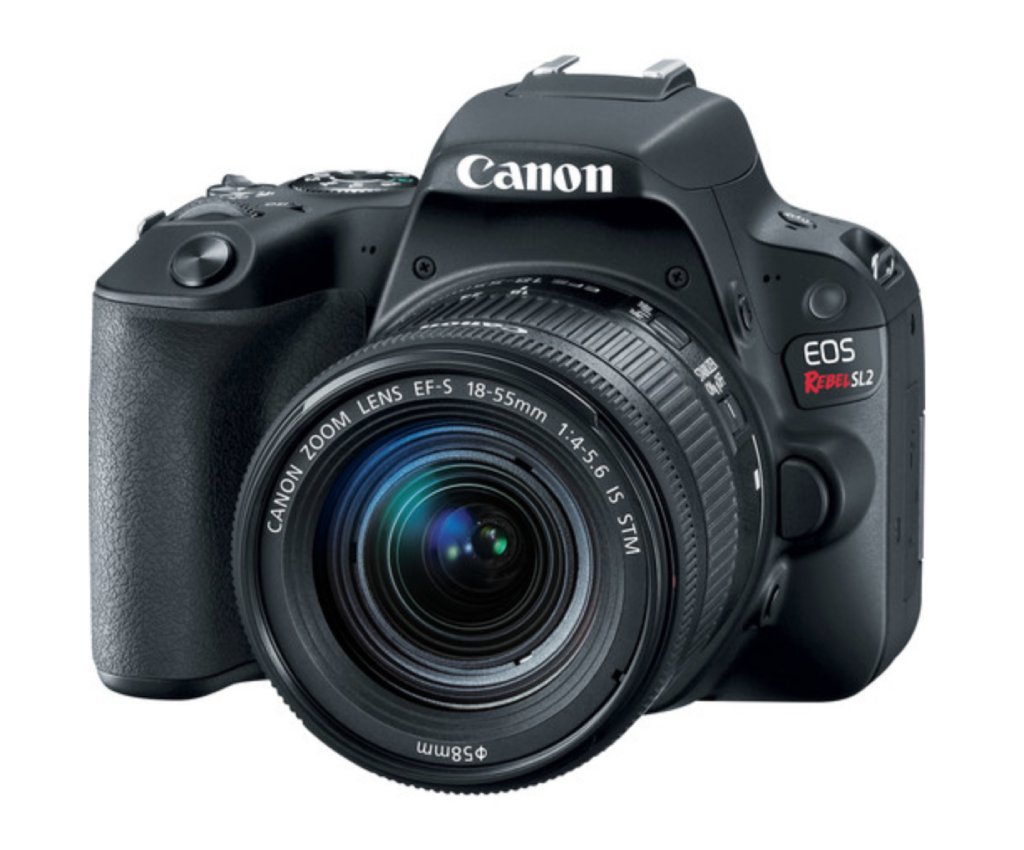 The Canon EOS Rebel SL2 was released about two years ago, and when it dropped, it definitely topped many a beginner photographer’s wish list. In April 2019, Canon SL3 was launched which is superior in many ways compared to SL2.

It was compact, it offered many modern conveniences, and it presented an interesting option for beginner photographers. The problem was that it was expensive.

Well, here we are in 2019, and the price has dropped enough for this camera to once again top a lot of people’s wish list.

Let’s talk about the capabilities of this camera in this Canon EOS Rebel SL2 review. 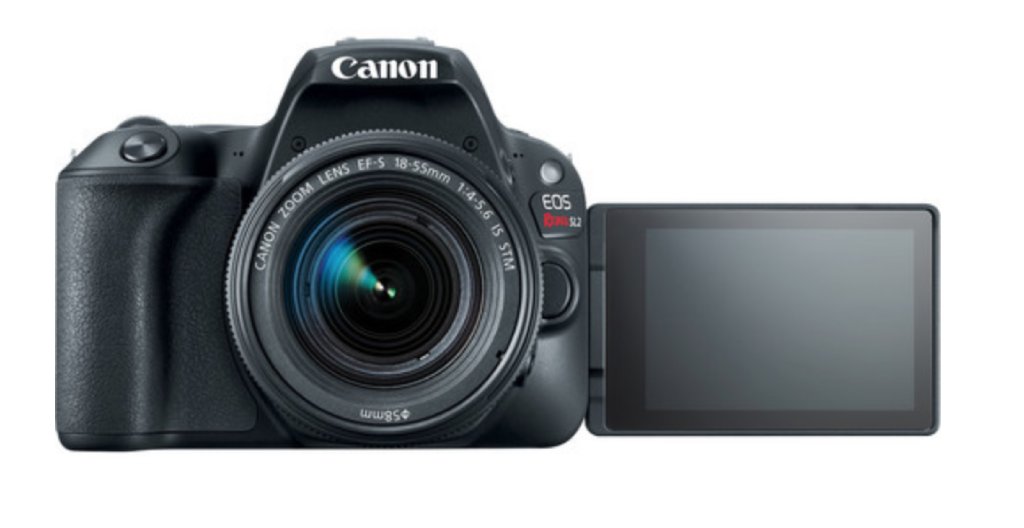 According to Canon, the Canon EOS Rebel SL2 is “the perfect replacement for the avid smartphone photographer looking to step up to their first camera.”

And, I’d have to agree. It’s got a selfie-mode, it comes with built-in WiFi, and the app for iPhone or Android users allows photographers to directly upload their selfies to Instagram in a smooth way. The app interface definitely beats out its competitors, which may be enough to persuade this crowd to take the leap.

But, what about for those of us who may just be looking for new gear? Here’s the full rundown.

You can check out more details about the SL2 in the video above by CanonUSA. 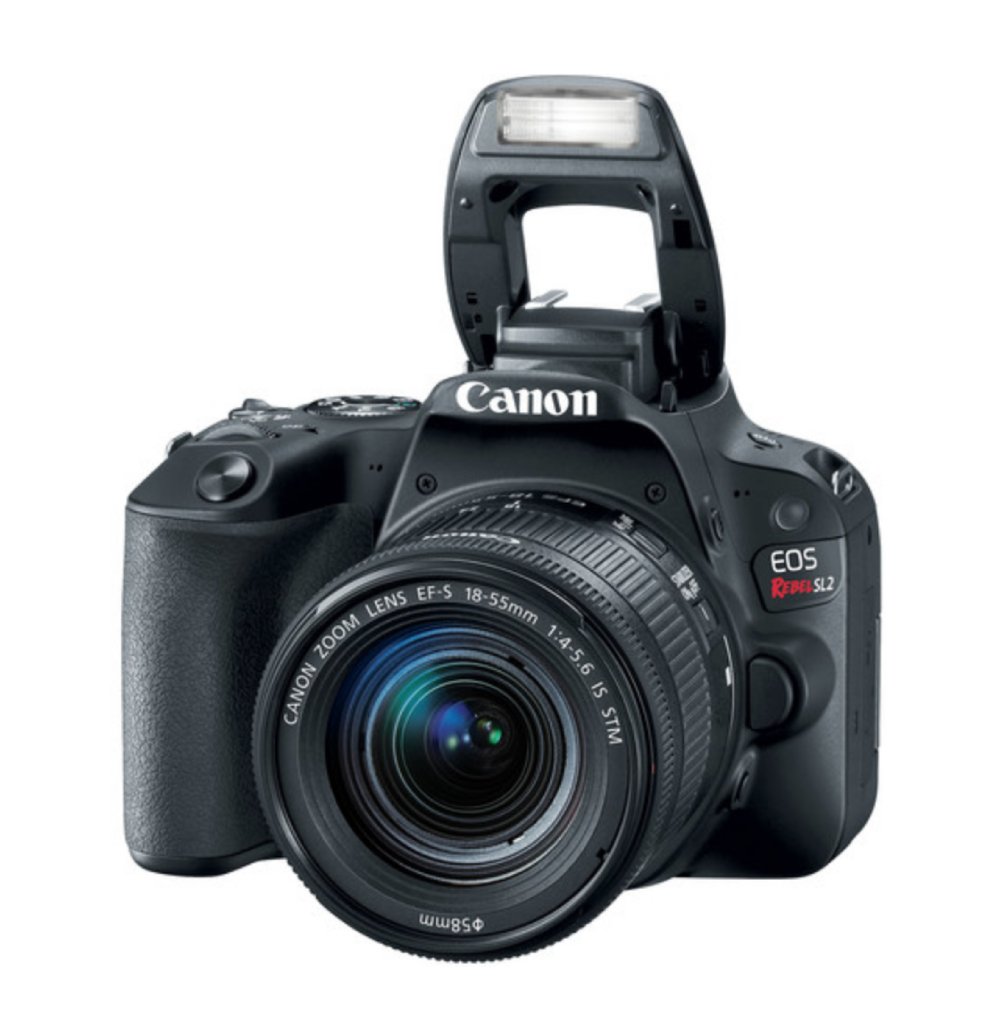 If you Google the Canon EOS Rebel SL2, all anybody talks about is how small it is, and it’s true, this camera is incredibly compact.

Weighing in at under 1 lb, the Canon EOS Rebel SL2 is the perfect travel-sized camera, which is what most photographers use it for.

The best upgrade to the body of this camera is definitely the vari-angle LCD, which means you can shoot at weird angles and still have a nice view of what you’re photographing.

It has other features that smaller cameras like compacts and bridge cameras don’t offer, namely a nice grip for hanging onto the camera and interchangeable lenses.

If a mini-DSLR appeals to you, then this may be just the camera to try out. 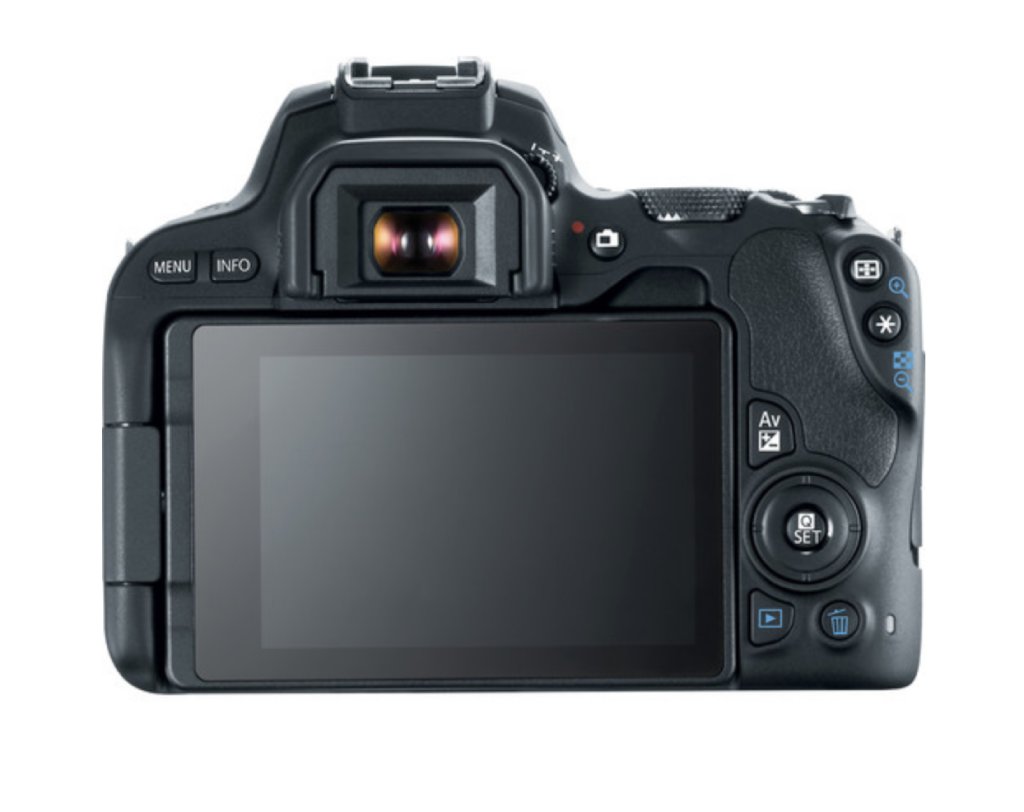 Because of the aforementioned compact size of the Canon EOS Rebel SL2, this camera will be a little cramped for the tastes of a more seasoned professional photographer.

The button layout is pretty typical, which is to say it only works for those of us who are right-handed.

I find it’s easiest to shoot with this camera when I have the screen tilted out and away from the camera, because again it’s a little cramped for me.

The rubber grip stack up to the one on the 5D Mark IV, but then again this is an entry-level camera, not a pro-level rig.

Nevertheless, it’s a fun little camera to shoot with and has all the features a beginner photographer needs to learn more about taking great photos. 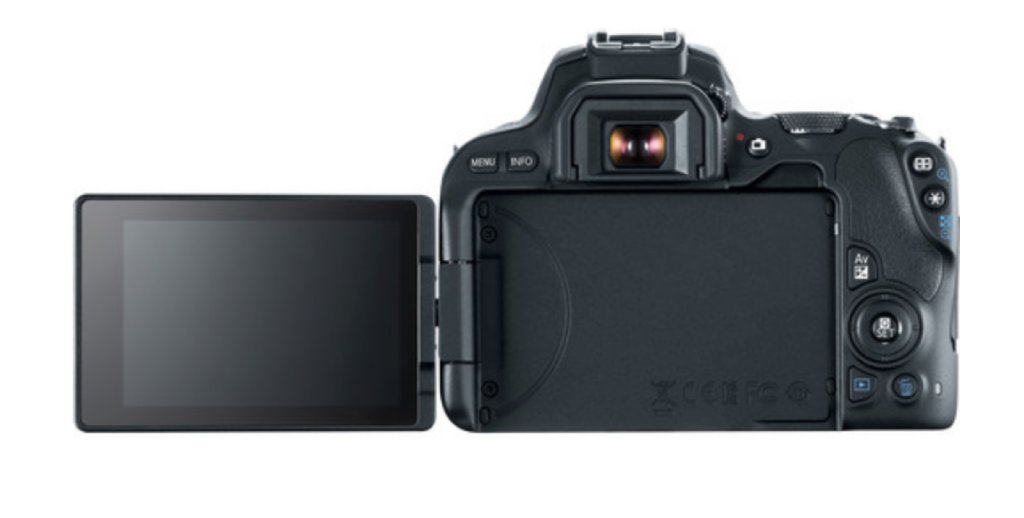 Many of the Canon EOS Rebel SL2 features are impressive, but its video quality is not one of them. It’s definitely not bad, but it’s still hard to recommend a camera that can’t shoot in 4K in 2019.

The Canon EOS Rebel SL2 video performances comes as close as possible, though, with Full HD 1080p video at 60fps.

Think Media, like the crew over at PhotographyTalk, are all about budgeting, and the Canon EOS Rebel SL2 price may make the lack of 4K video worth it. They walk you through a test shoot and show you exactly what the Rebel can do. 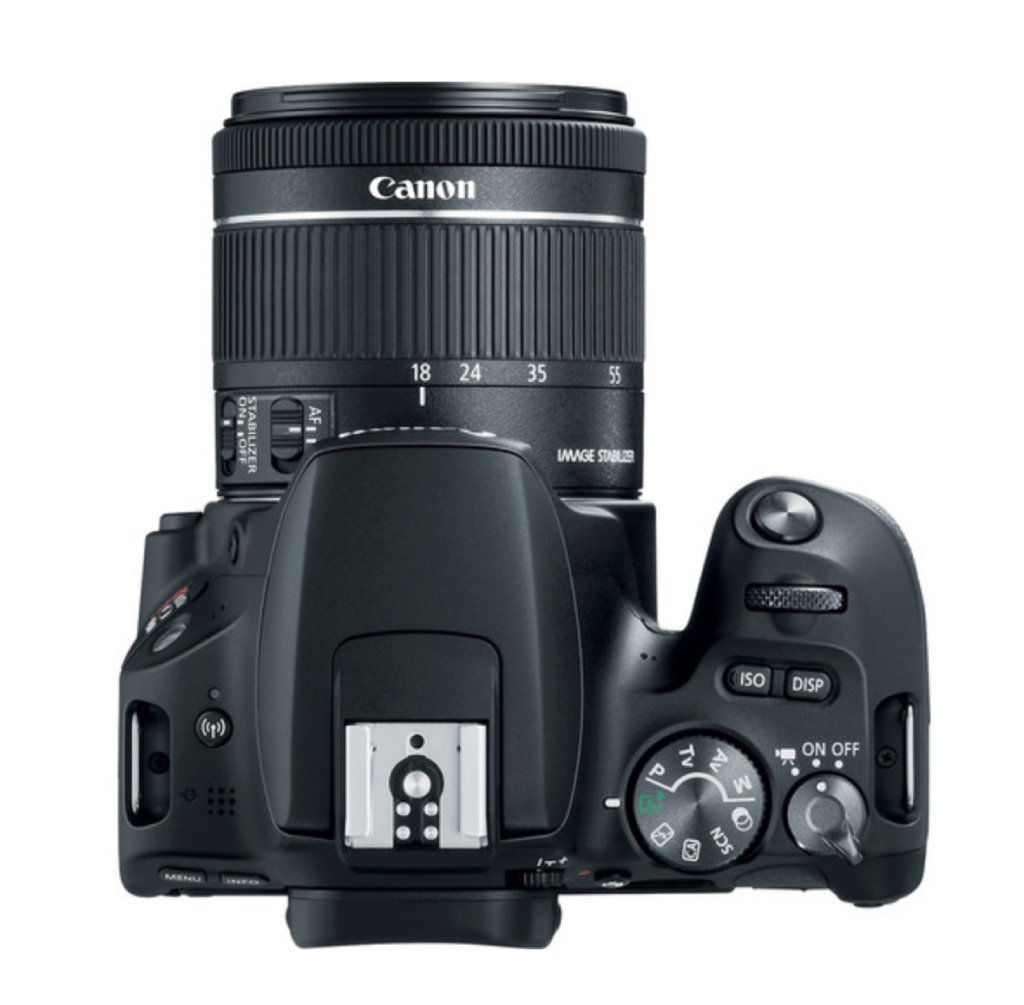 As I mentioned above, one of the advantages of a mini-DSLR like this is that they use interchangeable lenses.

That means that where a compact or bridge camera comes with a single built-in zoom lens, with this camera you have a virtually unlimited array of lenses available to you.

What’s more, there are all kinds of third-party lenses that will fit this camera.

In other words, You can outfit this thing with a wide-angle, a standard prime, a telephoto zoom, and any other kind of lens in between. 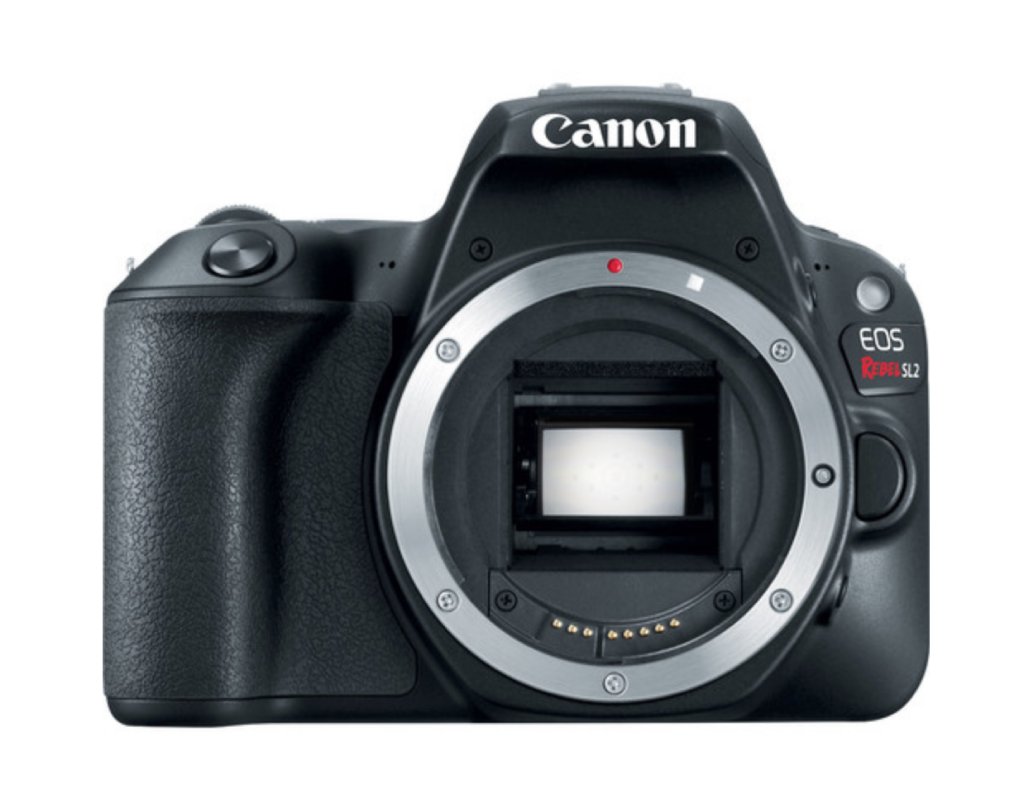 But, if you’re in the mood for an even better price, MPB has a large selection of Canon EOS Rebel SL2s for around $400. The best part is, at the time of this writing, they are all rated as “like new.”

If I had to choose between saving $150, and having an actually new version of a camera, I’m going to choose saving $150 every single day, especially because I know the quality standards that MPB relies on when they grade a camera.

MPB uses the same photo angles on their website so you can realistically compare one used camera to the next. The grading scale they use is much more accurate than the self-reported conditions you can find on eBay or Craigslist.

Plus, they are upfront about their fees and every camera you buy from their site comes with a 6-month warranty, which is insane in the world of used electronics.

Head on over and check out these used Canon EOS Rebel SL2s for yourself.