How to Edit Drone Photos the Easy Way 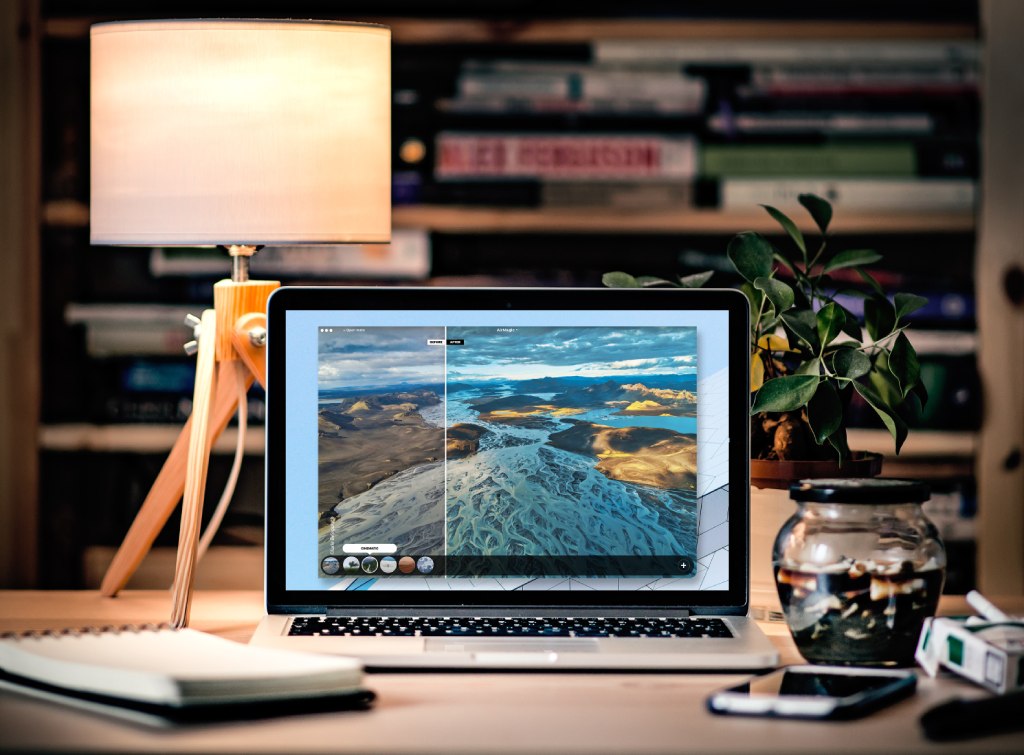 One of the best things about having a drone is that it is such a fun experience to fly.

Better still, I love being able to take photos and videos from a perspective above it all. It reminds me of my younger days when I was a pilot and able to look at the world pass by below me.

The worst part about having a drone is having to sit in front of my computer after the exhilaration of flying and edit the images I took.

If you’ve got a drone, you know that there are common issues with aerial photos, like haze, that diminish the quality of the photo.

But now there’s an easy way to address this issue (and many others).

Skylum released AirMagic earlier this month, and it is specifically designed for enhancing aerial photos - and doing so quickly.

In the video above, Jim Nix demonstrates just how simple it is to take your drone photos from so-so to beautiful. Below, I’ve highlighted a few critical features that make AirMagic a must-have for drone photographers.

What Exactly is AirMagic? 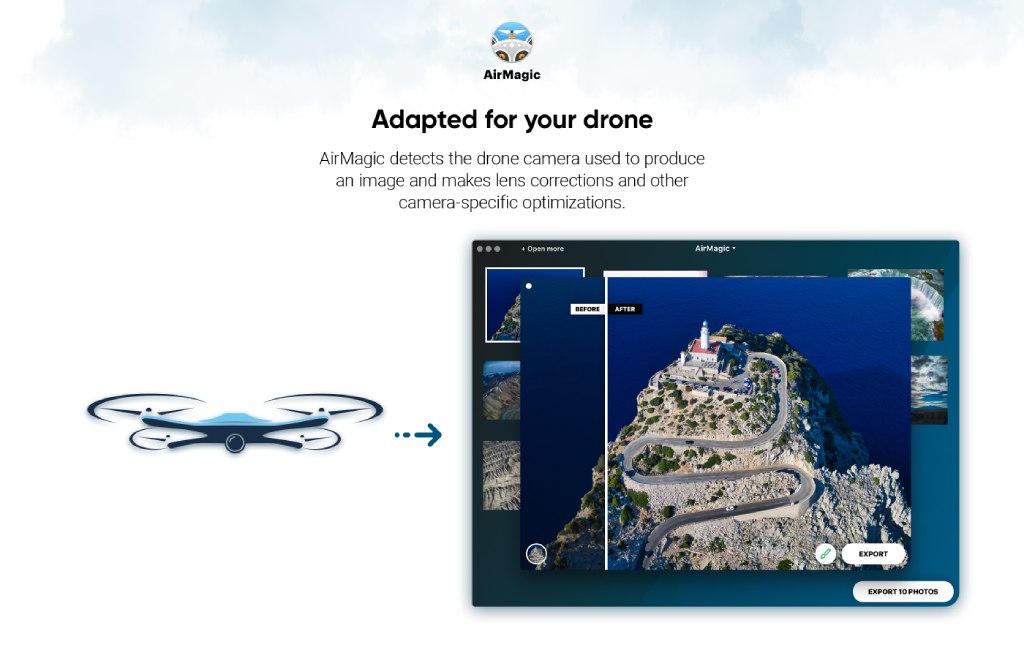 At its core, AirMagic is powered by artificial intelligence that has been tuned specifically for drone photography.

Its advanced algorithms examine the photo and determine what improvements are needed automatically. 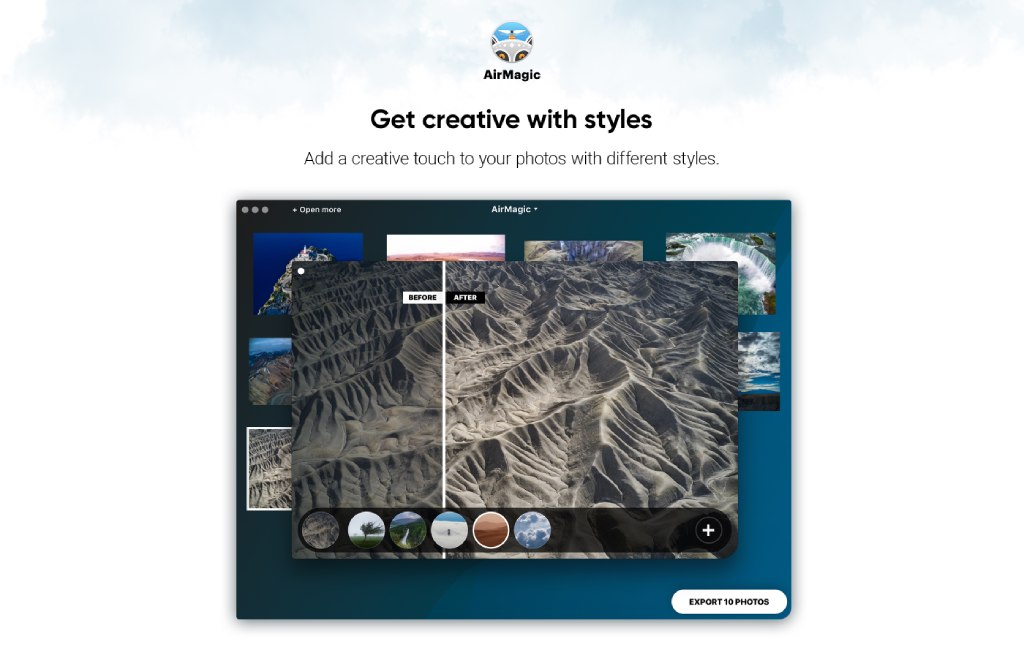 AirMagic works as a standalone app for Mac and PC or as a plugin for Photoshop, Lightroom, or Apple Photos.

As explained in this AirMagic tutorial, regardless of how you use the application, AirMagic renders changes to your photos automatically.

This isn’t to say you have no control over the editing process, because you do. But the gist of it is that AirMagic takes the long, boring process of editing drone photos and turns it into a workflow that requires a few minutes of work, if that. 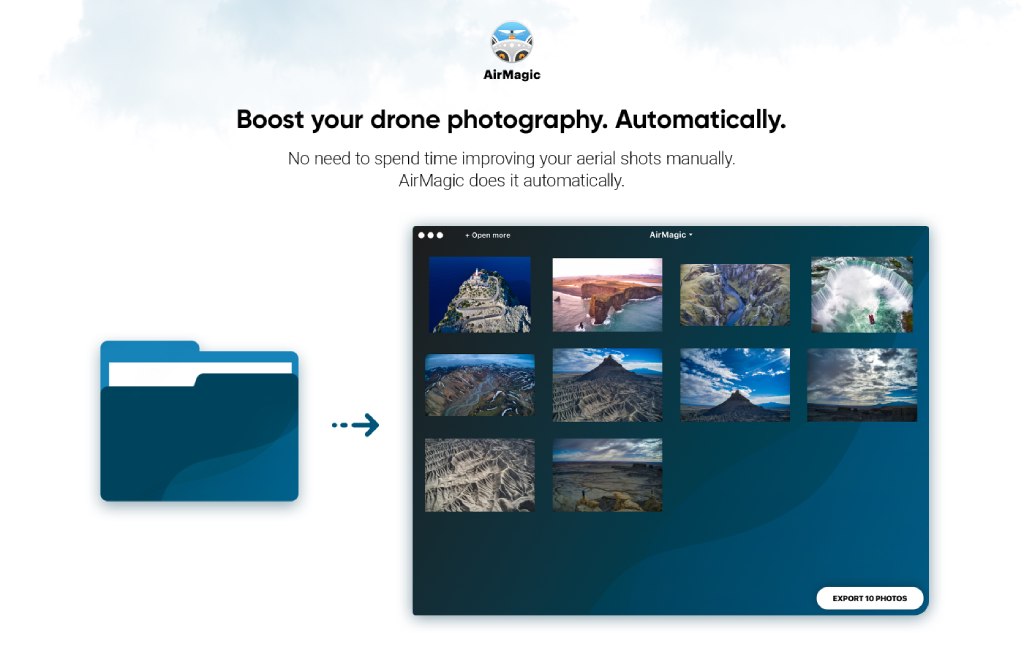 The process of editing drone photos in AirMagic begins by importing your images into the program.

Just drag and drop your images into AirMagic, and it will automatically begin enhancing the images.

To make further edits to an image, simply double-click on it. Doing so opens that individual photograph, but not before AirMagic’s AI engine detects the specific drone camera that was used to take the photograph. 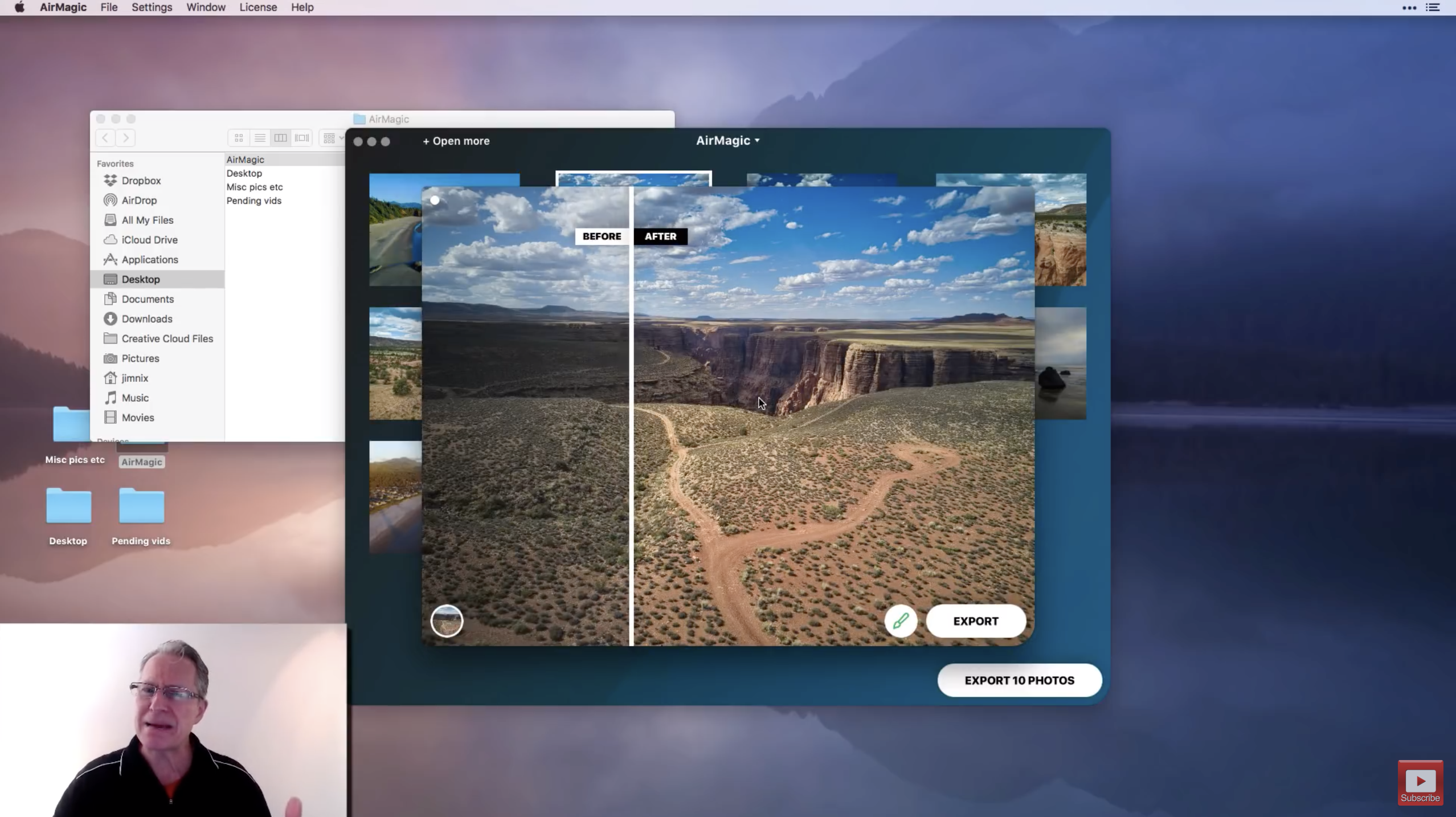 This is important because AirMagic will make camera-specific adjustments to the image automatically, thereby further enhancing the image.

At this point, there have been two rounds of image enhancements that together have taken mere seconds. Yet, look at the enormous difference these edits have made in the photo above. 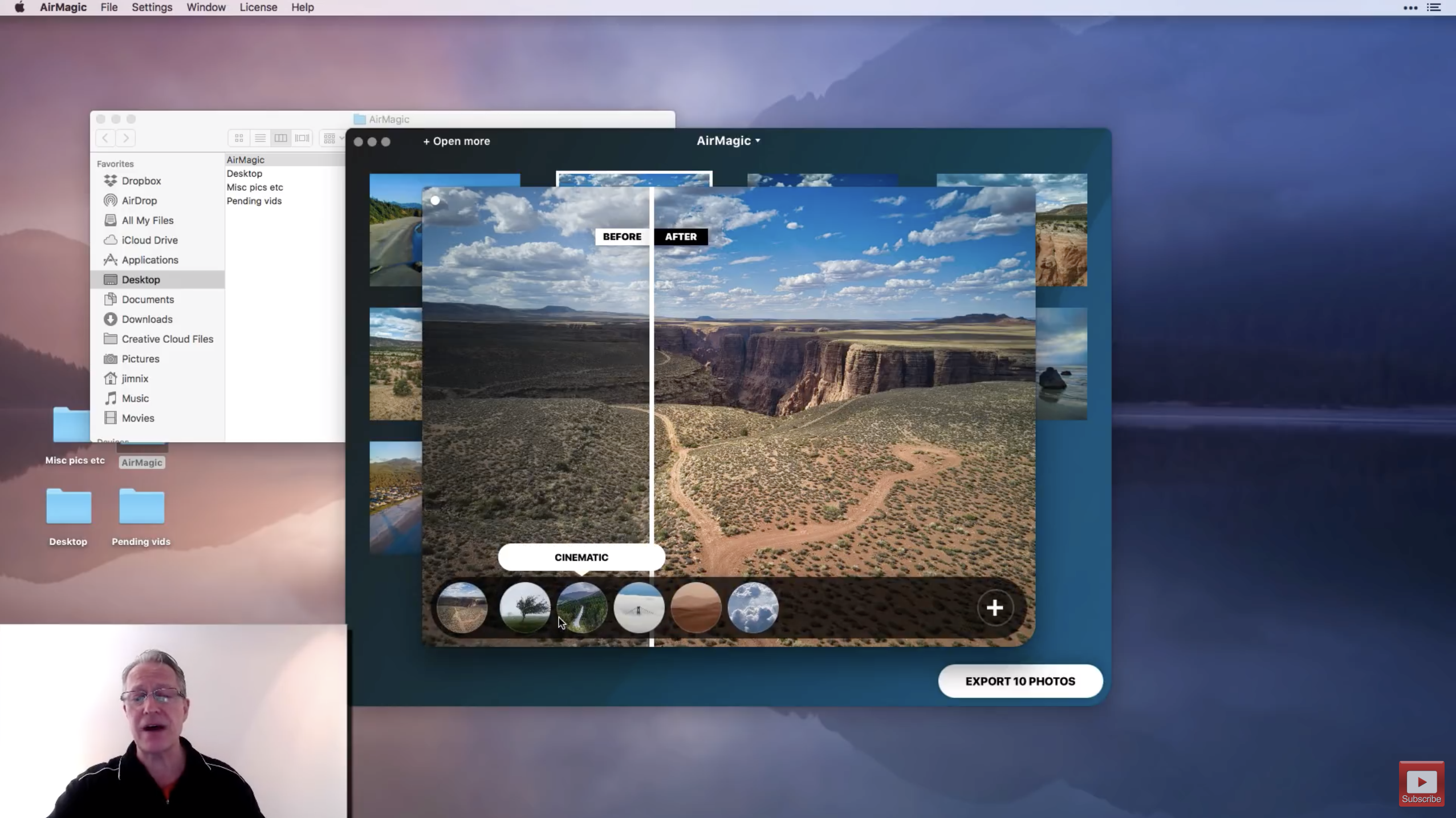 In addition to the automatic adjustments that are made, you can apply one of five different Styles or presets to your images.

Above, you can see the Styles displayed along the bottom of the editing window. To select a Style, simply click on it and it will be applied to the image. 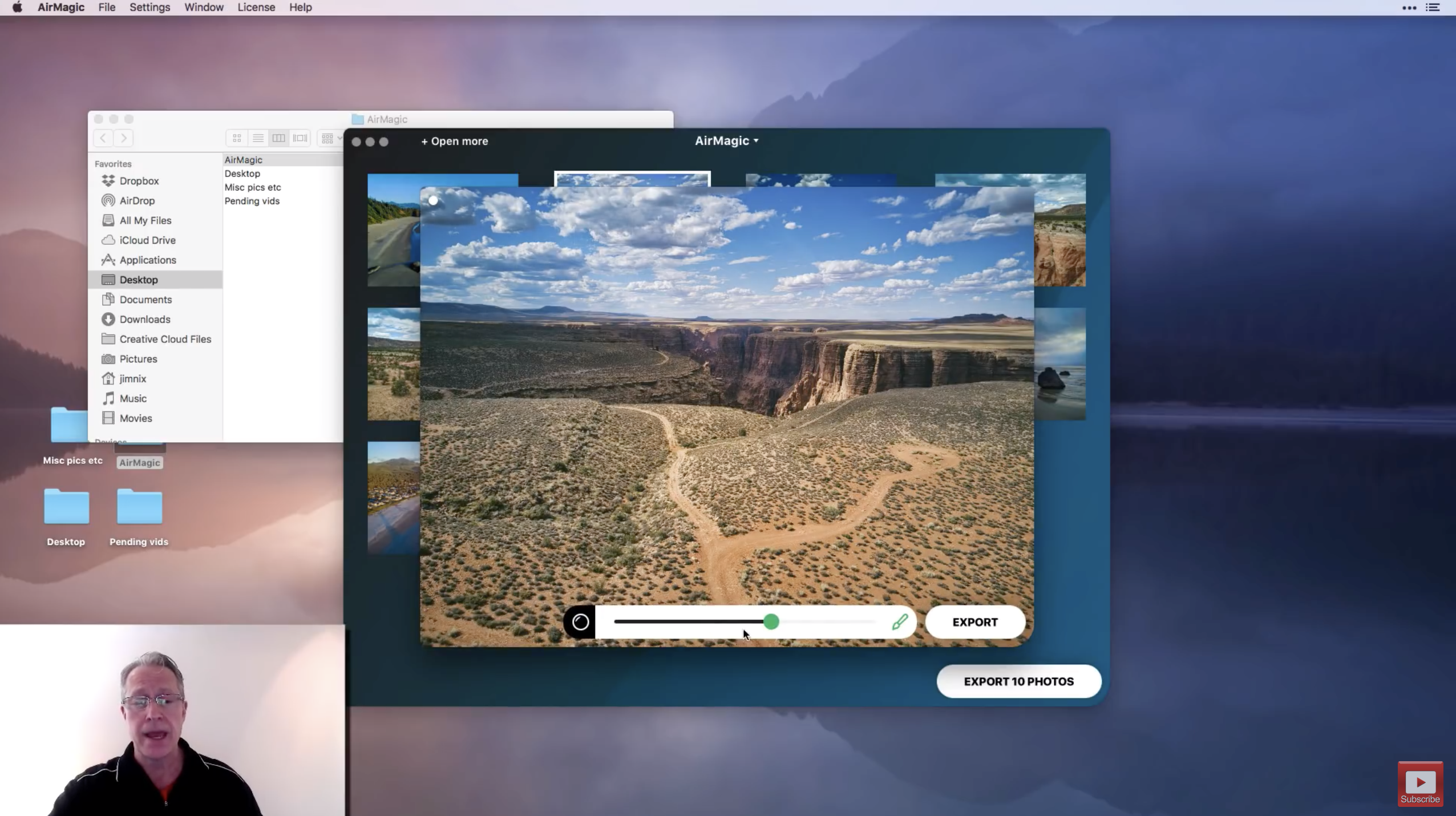 In the screenshot above, Jim has applied the Chinook Style, which has brought out the reddish tones of the landscape and boosted the contrast in the sky. 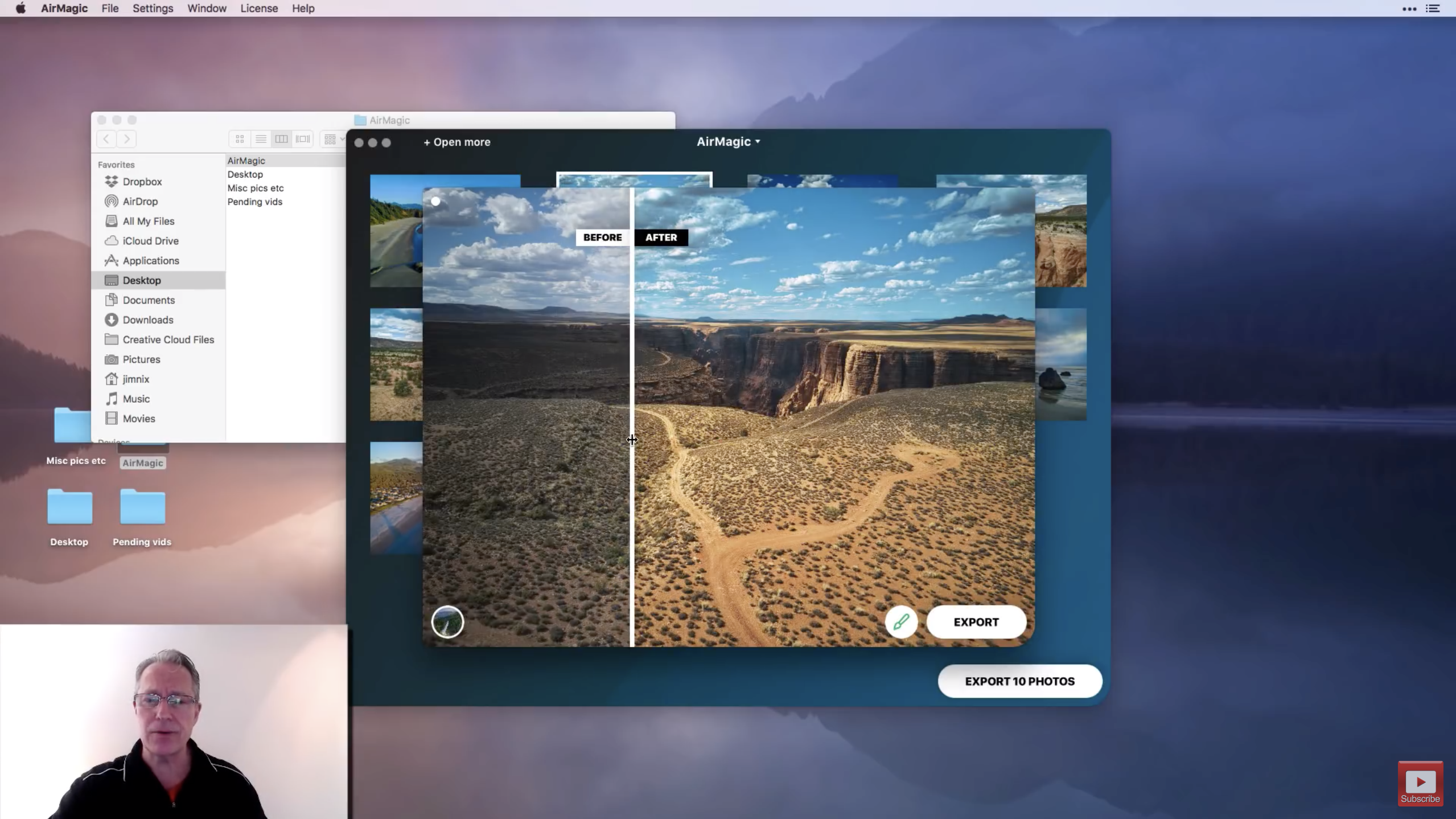 Here, Jim has used the Cinematic Style, which, as you can see, has applied a bluish tint to the image. 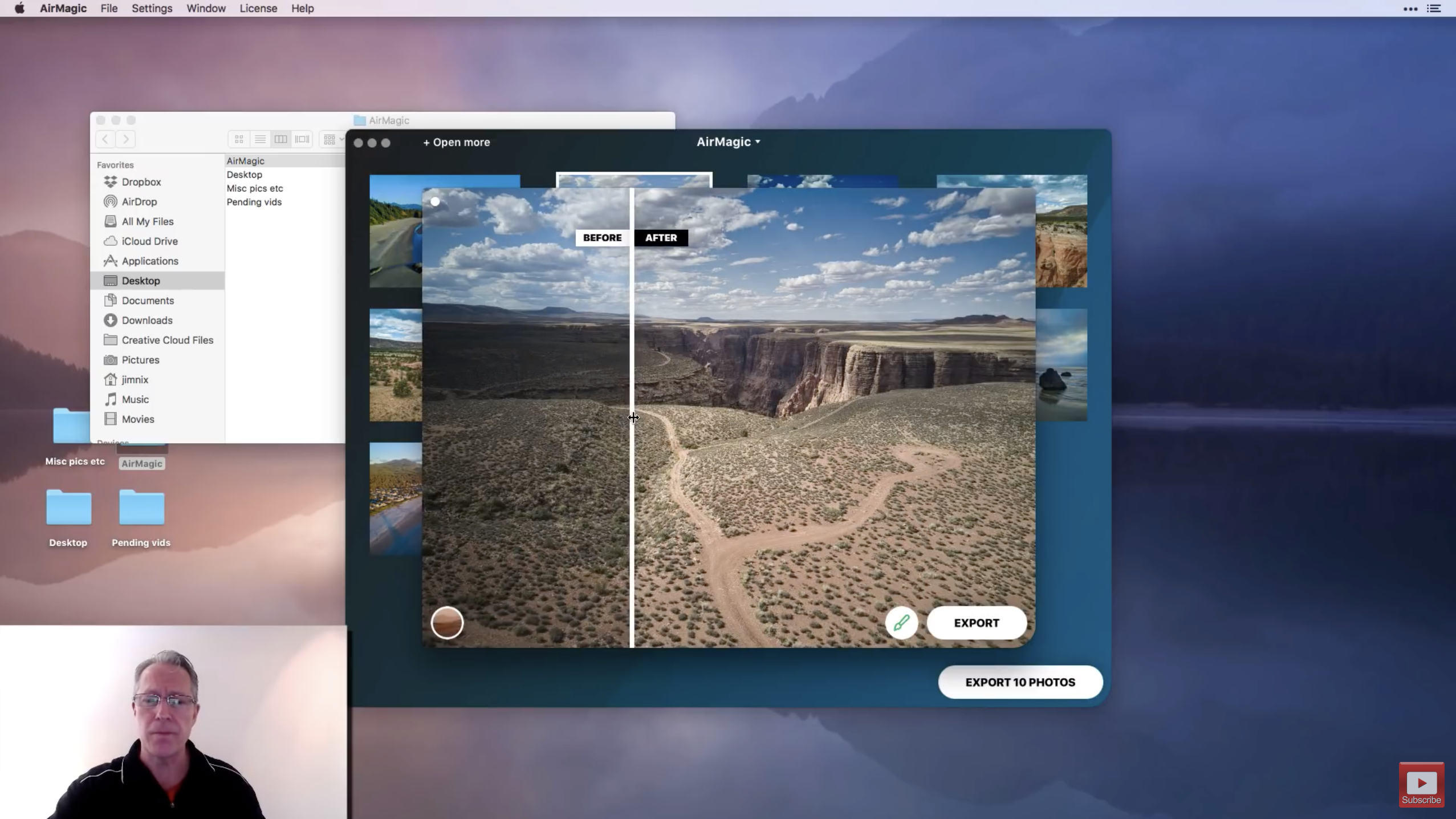 In this screenshot, the Sandstorm Style has been applied, which has desaturated the image.

The point here is that even though AirMagic makes so many adjustments to images on its own, you still have a great deal of input regarding how the final image looks by using a slider to increase or decrease the overall effect of the edits, and by selecting which Style best suits your particular aesthetic.

All told, Jim spent perhaps two minutes working on his desert image from the moment he imported it into AirMagic until the moment he was done adjusting the strength of the edits and applying the filter of his choice.

With such a streamlined workflow, that means you can spend more time actually outside flying your drone and taking epic photos and less time parked in front of your computer making edits!

How to Get Skylum AirMagic 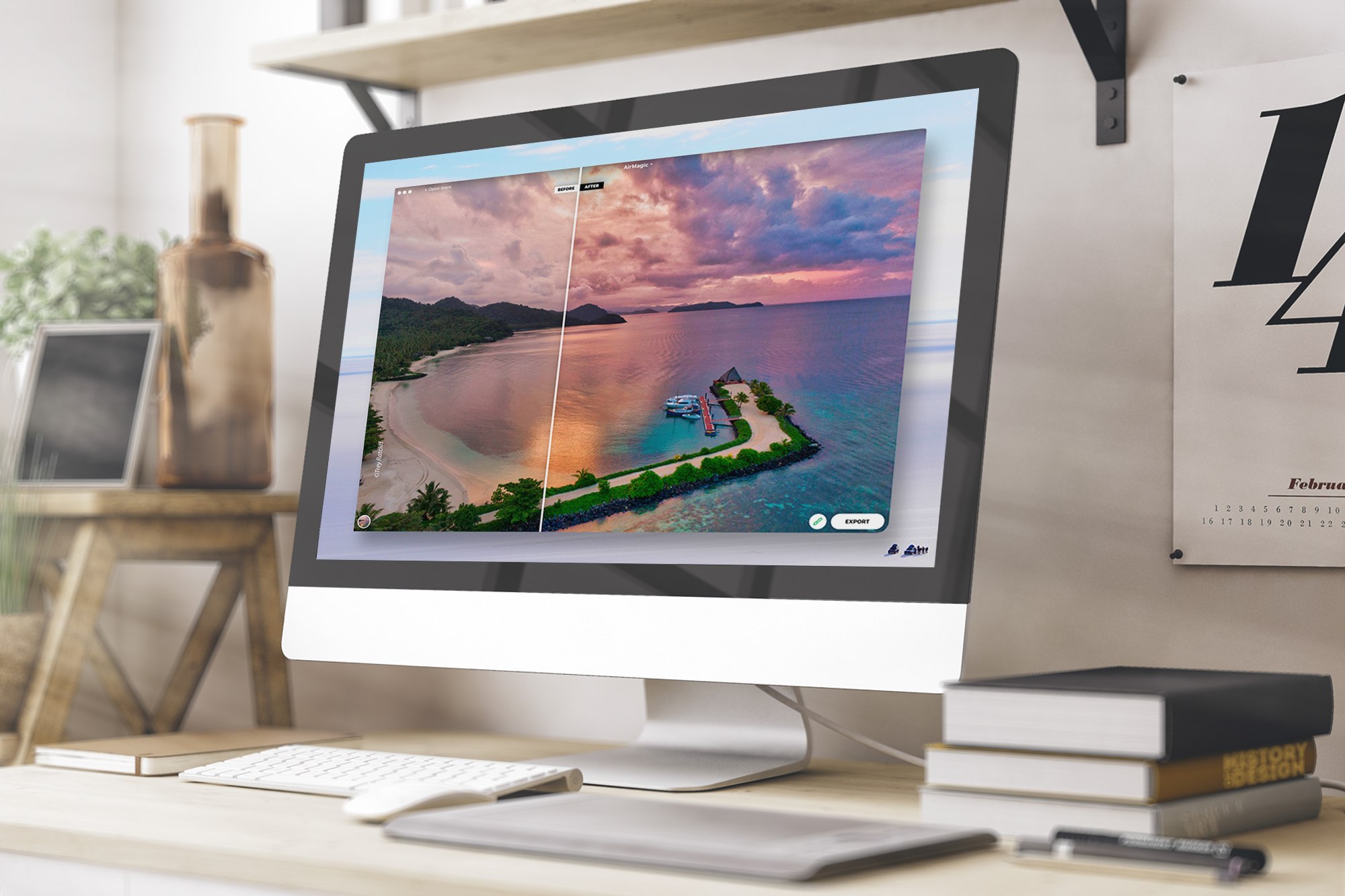 If you’re ready to edit drone photos the easy way, you can pick up a copy of AirMagic for $39.00.

In addition to being affordable, a single AirMagic license will work on two computers, even if one is a Mac and the other is a PC.

Skylum is also offering the AirMagic Creative Edition for $41.00 right now, which includes the two licenses as well as the AirMagic Premium Style (you can also buy more styles from the AirMagic Marketplace).

If you’re a professional drone pilot and have a drone business, Skylum has thought of you as well. AirMagic Business is $89.00, and that gets you five licenses.

So, AirMagic is easy to use, fast, and affordable. What’s not to like about that?