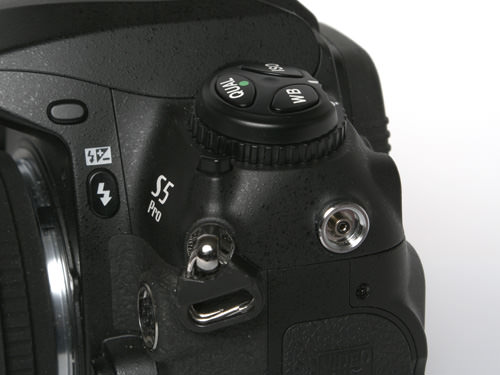 Digital photographers are just as vulnerable to a problem that often plagued traditional film photographers: Shooting at the wrong flash-sync speed, which registers the shutter curtains as black bars across a photo. Those black bars obscure part of the image, rendering it useless. This is most likely to occur when using studio flash or other off-camera flash systems. This PhotographyTalk.com article explains how this happens and what you can do to avoid it.

First, DSLR cameras are made with a focal-plane shutter that is located immediately in front of the sensor. The shutter is constructed with two curtains. Each moves independently in succession, from the top to the bottom, to expose the sensor to the light coming from the scene or subject you are shooting. The speed of the two curtains is coordinated with the speed of the shutter. Shoot at a slow shutter speed, such as 1/30th, and the curtains move slower.

The black bars occur because your camera’s shutter is not completely open when the light of a flash unit reflects off your subject and into the camera. The light silhouettes the curtains onto the sensor, so they become part of the photo. In most current cameras, the focal-plane shutter makes the entire transition from above to below the sensor in approximately 1/200th of a second; however, a flash fires much faster, in an instant.

The timing of the focal-plane shutter and flash must be coordinated, or in sync, so the curtains are not still moving across the sensor when the light of the flash enters the camera. You want the light entering the camera and hitting the sensor when the first curtain has completed its journey and before the second curtain starts. The black bars will be more prominent, as you shoot with a faster shutter speed.

To avoid this problem (or a real disaster if someone was paying you for his or her portrait), you must know the flash-sync speed for your camera. For example, it is 1/200th for Canon cameras and 1/250th for Nikon’s. You must shoot at your camera’s flash-sync speed or slower. In the controlled environment of a studio, you can shoot at a speed slower than the flash-sync speed because the light from the various flash units overpowers any ambient light in the studio. That ambient light can have an effect, however, when you use very slow shutter speeds, such as a second or more. It will also ruin the white balance that you so carefully set.

The explanation above applies to all flashes: studio or off-camera flash units as well as an on-camera flash. In fact, most on-camera units won’t accept a shutter speed greater than the camera’s designated sync speed. A high-speed sync setting is an option on some on-camera flash units, which will then allow you to select a faster shutter speed. The advantage of this option is that you can use your on-camera flash as a fill light outdoors, where you typically need a faster shutter speed than the flash-sync speed of your camera. Shooting at 1/200th with your Canon camera on a bright, sunny day, even at f/22, will cause all your pictures to be overexposed. The high-speed sync option will also allow you to create a shallow depth of field, such as photographing close-ups of flowers or insects, with a flash.

Knowing the correct flash-sync speed for your camera is another good reason to read the camera’s manual.

Also Read: 23 things you must know to be successful in photography