Photography Article: Made in Mexico

Before this past February, Toronto photographer Richard Martin had never journeyed to Oaxaca, nestled in the foothills of the Sierra Madre mountain range, but something about the Mexican municipality drew him in before he even entererd the city limits. “I was really drawn to the place because of photographs I had seen — a good friend of mine lives there in the winter,” he explains. “I was immediately attracted by the colors and the textures.”

The vivid photographic appeal of the capital city (named a World Heritage Site in 1987) spurred Martin to book an intimate photographic workshop there with eight participants over the winter. The adventurous photographers roamed the streets of the historic city, as well as the nearby countryside, taking in the colorful cafes, sprawling open-air markets (including the Sunday market in Tlacolula, one of the oldest markets in Mesoamerica), and Spanish Colonial architecture. “Oaxaca far surpassed my expectations in terms of the visuals, which was my main reason to go there,” he says. “I was also impressed with the indigenous culture, the food — even the climate is perfect. There’s a reason it’s often referred to as utopia!”

Martin had received the new Tamron 18-270mm VC PZD lens the night before his trip, and was excited to debut it in Oaxaca. “I have the previous version of this lens and love it — I used it a lot in earlier trips to Cuba and Venice,” he says. “Like its predecessor, I love the versatility of this new model, and I appreciate that it’s even more compact and lightweight. We’re out and about all day, so that portability is important. The focusing was really snappy, quick, and quiet, and I like the fact that, if you have a polarizer or graduated neutral density filter on it, it won’t rotate when you’re zooming out.”

The 18-270’s Vibration Compensation (VC) feature also proved ideal for Martin’s touring style. “I’m generally a tripod shooter, but when I’m working on the streets, it’s liberating to handhold the camera,” he says. “It makes me a lot less noticeable that way — as soon as that tripod goes up, all eyes are on you. I couldn’t get over the quality of my pictures with the VC on. I was using shutter speeds three stops below the rule of thumb for handholding — the optimum sharpness, I found, was achieved with aperture settings between f/8 and f/11.”

Images as Rich as the Culture

Martin made sure to vary his photographic itinerary so that participants were able to capture the bustling routine of the city center in addition to the more serene sights and sounds of the countryside. “Our hotel was right in the historic part of town, so every morning, we’d go out at sunrise for at least two hours before breakfast and work the morning light in the streets,” he says. “We had three field trips on the schedule, so on those days we’d head out to the countryside for the day.”

On trip days, Martin and his group would frequent local markets or places such as the famous Zapotec community of Teotitlán del Valle, which is known for its colorful weavings. “There was one place where a family had been using natural dyes in carpets for generations,” he explains. “They would actually make the dyes, dye the material, and then put together the carpets, all by hand. Those types of venues offered a rich sense of contrast to the city itself.”

On the days the group wasn’t embarking on a field trip, photographers could take a siesta during the harsh light of midday or partake in classroom sessions, where they’d download and look back on the work they’d done so far. “We’d use the early evening to finish photographing the town, and by the time the sun set, we were pretty much finished,” Martin says. “Our nice long dinner was the finale of the day!”

Oaxaca’s personality and character made it the ideal photographic subject. “I enjoyed shooting everything there, but I’m especially drawn to graphic elements and shadows,” Martin says. “The buildings in Oaxaca just had these beautiful colors and a lot of texture. It’s like antiques: They have that certain patina. You can’t re-create that age, the cracks in the walls, the lines — it’s like a fine wine.”

Just as important as scoping out the location was making sure the light was just right. “To incorporate all of that gorgeous color, you have to ensure you’re shooting in quality light,” he says. “And you have to make sure you check out the same places and things in all different types of light: You may walk down a street at lunchtime and see a certain building and walk right by it. Then, the next morning, you may walk by that same building and suddenly it’s animated and beautifully rich because of the different light it’s in.”

Morning and late afternoon sunlight, for example, offered light that was warmer and lent more texture because of the lower angle of the sun, according to Martin. During one of his morning expeditions, Martin came across one of Oaxaca’s 27 ornate churches, complete with orange walls, green shutters, and eye-catching native trees flanked by flowers. “The sun was coming over the building and down onto the trees, so the tree leaves were lit from behind by the morning light,” he says. “The whole image has such a painterly feeling to it.” 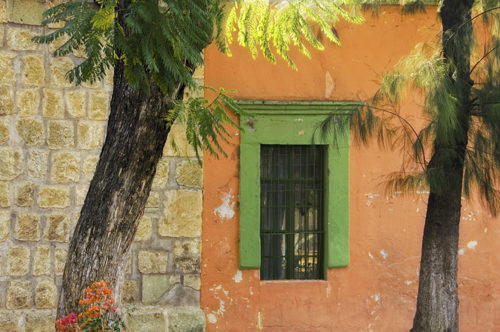 Likewise, Martin took advantage of light later in the day for a scenic shot of a tree against an orange wall. “That was taken about an hour before sunset, on a street where the light was dappling through larger trees onto this smaller tree,” Martin says. “That’s what caught my eye — the starkness of that tree as seen with that dappled light.” 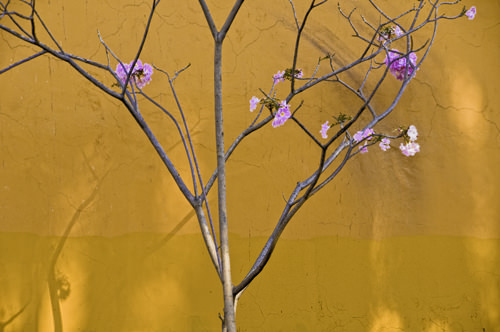 When shooting architecture and buildings, on the other hand, Martin was able to focus in on beautiful shadows at all different parts of the day. “There was an 11x17 poster on a red wall, and it had curled up from the heat of the sun,” he says. “It wasn’t the poster itself that caught my eye: The high, harsh midday sunlight was streaming down the wall and created this large shadow. Plus, because red is such a strong color, it created a really powerful graphic effect overall.” 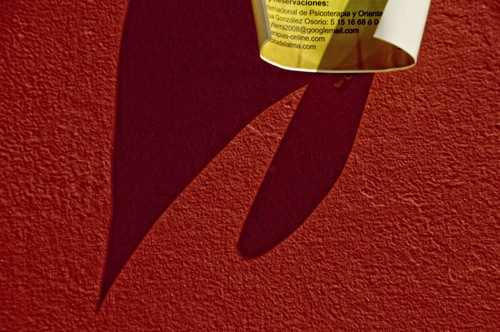 Martin also emphasizes how important it is to slow down and look for the unusual, the elements that stand out, the simple images that pop up in the least likely places. “There’s a lot of art in Oaxaca, including a lot of high-end galleries,” he explains. “And many of these galleries and museums weren’t even built by the government — they were funded by wealthy Mexican citizens. In the city, there happens to be a stamp museum, and it’s probably the only white building in town. The architecture of the building itself is very simple, but I was in the courtyard, and the shadows on the wall, along with the contrast of the cloud above, simply captured my attention.” 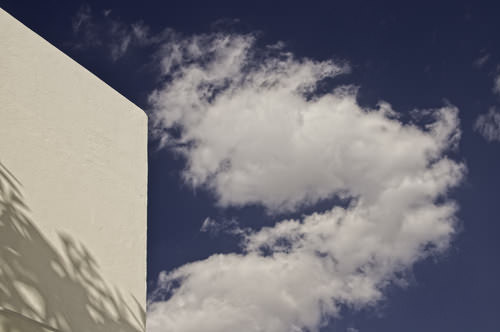 The same thing happened as he wandered past a roadside restaurant, where he spied a yellow chair resting against a lime-green wall. “What was compelling to me was the rounded corner and the simple starkness of that chair,” he says. “I consider the 18-270 lens a design tool in how it renders form, so I knew immediately when I saw it that I wanted to go to 18mm, the widest setting I could go, to create that emphasis of angles. People later asked me, ‘How’d you see that?’ I always stress that you have to constantly be on the lookout. Maybe everyone expects that the best pictures will be things on a grander scale, but my favorite images are always the ones with the least celebrated content — the images you’ll never see in a guidebook. What’s exciting is that these great images can be found on any street corner — you just have to look for them.” 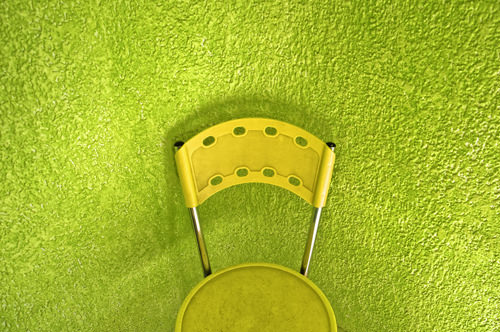 To see more of Richard Martin’s work, go to www.richardmartinphoto.com. And,

For more information on the Tamron 18-270mm lens click here