Photography Tip—How To Shoot Pro Hockey Part One, The Basics 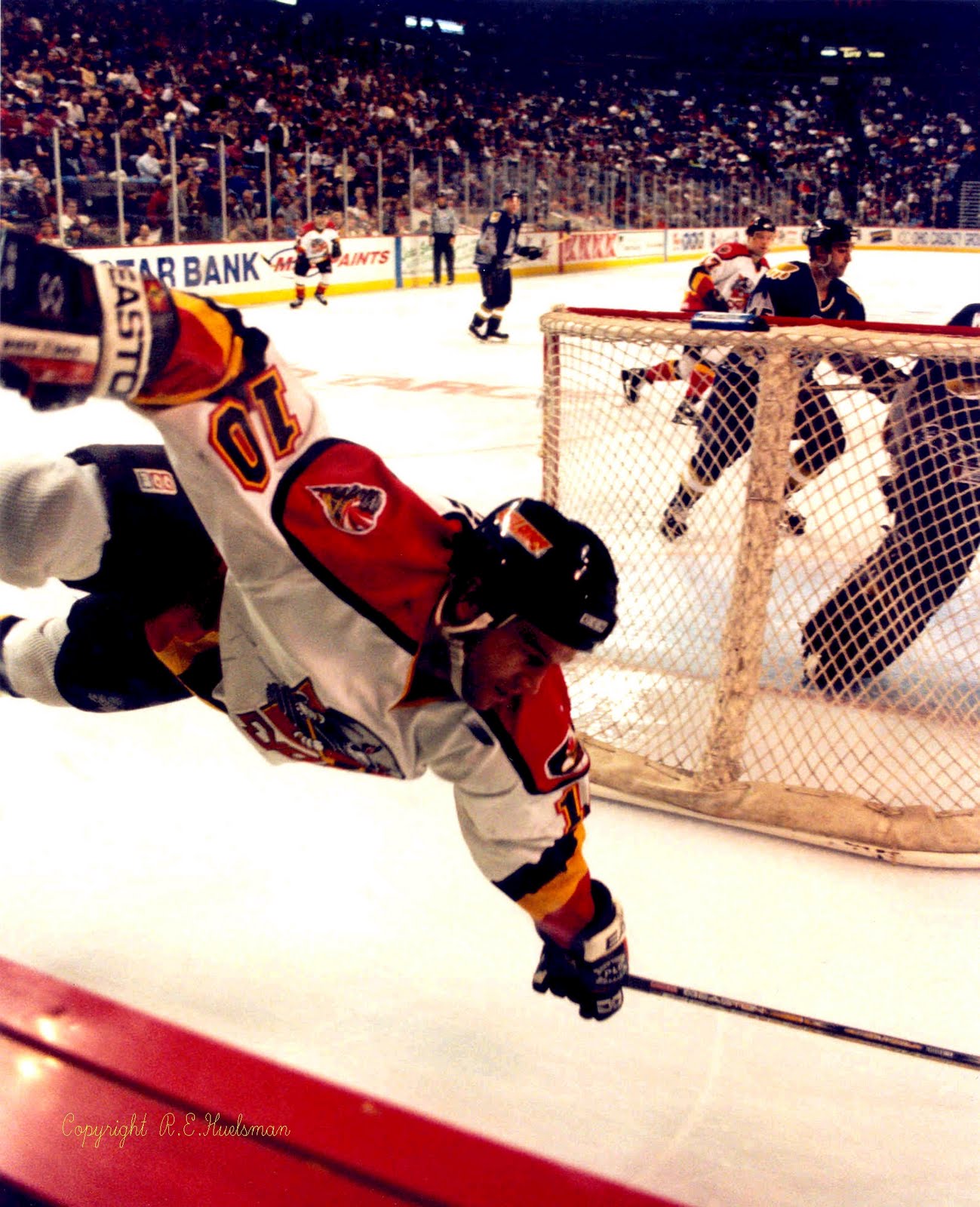 It’s July right, and it’s here that you should begin to think about learning the basics of shooting your favorite team. Hockey is a year round sport as it is winter in the southern hemisphere now. The season will be getting under way here in the north in a few short weeks with training camps now that the NHL Draft is behind us once again.

Most Fans will arrive at the rink with a variety of cameras in tow hoping to capture those memories of their favorite team in action. In this first part I will guide you through the point and shoot to the consumer level DSLR and how you can bring home some memories with this equipment. The lower end point and shoot camera will limit your options and test your skills as a photographer because of limited high ISO capability and zoom range. You can however get some very good portrait shots of players when they are in static positions such as before face-offs. Remember to leave a border as you frame your shot so that you don’t cut off heads or feet unless your goal is to get an extreme close up.

Higher end point and shoot cameras give an advantage due to better high ISO capabilities and improved optics. Also the maximum apertures attainable with these cameras tend to be better. If your camera offers full manual control and ISO settings of 800 to 1600 this is to your advantage. Sport programs tend to offer middle of the pack performance as far as stopping the action in a fast moving sport like hockey.

Next up are consumer level interchangeable lens DSLR cameras. This is where you should forget about the sport program and go full manual with some tweaks of your settings for the best results possible. Your kit lens will have a limited maximum aperture and zoom range but if you work well with the limitations of your equipment you should go home with an acceptable amount of exposures you will want to keep.

Now that you have your camera equipment in general ready to arrive at the arena I will discuss the specifics of settings. WHITE BALANCE in general will be a big challenge as every arena lighting system is different. At first set it to Auto and see how white your ice is rendered. PRE-SET white balance may be an option as it allows you to measure the white of the actual ice and set your balance from there. The next setting to consider is your ISO and generally you should start at 800 and go upward from there to about 1600. Depending on your camera you may have High ISO Noise Reduction software built in and I recommend its use. Your Shutter Speed should be set high enough to capture the movement of the puck and freeze the movement of the players. This generally begins around 1/250th sec and goes upward to 1/500th sec. Tweak this setting to match your Maximum Aperture- the larger the F-stop the better. I will bring in more about this as I discuss lens selection later on. Effective shutter speeds are a must in order to freeze the motion of the puck.

LENS SELECTION is a big area of concern as most kit lenses offer adequate aperture at the wide to middle of the zoom range but are painfully “slow” at maximum zoom. This is where learning to work with the limitations of your equipment is a must even if it is frustrating. A “fast “ 50mm lens is a good choice if you are sitting close to the ice or right on the glass. If you are fortunate enough to have seats in the front row remember that a LENS HOOD is a valuable piece of gear to keep reflections at bay. Rubber or soft hoods are preferable to metal or hard plastic when used against the glass. For those with variable aperture zoom lenses keeping the lense aperture in the 3.5 to F 4.0 range is a necessity to keep adequate shutter speed. This limits how “close” you can bring in your subjects.

When you are planning your trip to the arena try to get there as close to the time the gates open as possible. Most open an hour before face-off and this give you adequate time to find out some good shooting locations during WARM – UP. This is usually the time when you can move around the stands with some ease and even get down on the glass in the front row. If this isn’t possible the try to find a spot above the glass near the middle of the arena or in the home end of the ice. Avoid the area covered by netting in the end zones. The warm-up time is also your time to warm up and get into shooting mode. Try both vertical and horizontal compositions of players shooting and cutting up with team mates. Spend a little time on shooting the goaltenders as they get warmed up too. Practice anticipating the puck reaching the net minder and see how good you can get at stopping the puck. Review your shots after warm up and before the game begins so that you can make adjustments to your settings and techniques as needed.

TECHNIQUES are relatively few and simple. PREFOCUSING on the goal crease will get a fair amount of goalie action and puck movement. This is a good place to start as are Face-offs. Anticipate the drop of the puck to capture it mid air or between the players sticks. Again freezing the action is essential to getting a good shot. PANNING as the players move up and down the rink will allow you to follow the action and record those awesome open ice hits and massive checks into the boards. FIGHTING is a part of this game and so begin to focus on the combatants as they circle for position. Then you will be able to record the punches and facial expressions as they flail away at each other. Learning to steadily hand hold your camera/lens combo will give you the sharpest pictures possible. The use of a monopod to steady/support the camera is a helpful tool.

Be sure to capture the post goal celebrations by the players as these can be pretty much fun to record. If you sit across from the bench pay attention to the coaches behaviors as they direct traffic, design plays and give the referee what for during the game.
Post game the players leaving the ice will sometimes salute the fans by raising their sticks in the air and the “stars of the game” will re-enter the ice for a curtain call or an interview. Be sure to capture these more intimate moments for you memories to be complete.

These are the basics to capturing all of the action and glory that is hockey whether it is the “big show” at the NHL level or in the Minor Leagues where I work. Good luck and Happy shooting and now on to part two where I cover the sport for the more advanced shooter.