Photography Tip—Flashpoint 5-in-1 Reflectors: Can't Live Without Them! 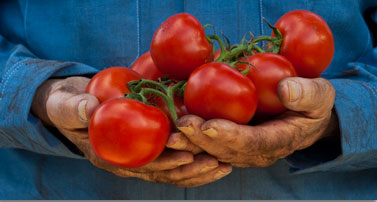 You may discover, as I have when out and about, that hats are a popular accessory for many people. When you're photographing anyone wearing a hat, your first thought should be to break out a reflector, as it does a great job of filling in light on the face in places where darkness would otherwise normally prevail due to the natural shade the hat provides.

What started out years ago as an occasional accessory has now become all but a full-time tool for me. Yes, I admit, I am a reflector junkie. I can't seem to take a single portrait without using the Flashpoint 5-in-1 Reflector. In fact, the reflector is right up there on the "must have" accessories list with the polarizing filter, the 3-stop graduated neutral-density filter, and of course some canned air and a Rocket Blower brush. If more amateur photographers would use a reflector when shooting portraits, their ratio of success would improve tenfold.

While making this image of one of my students on a workshop I suggested we use a reflector, so out came the 5-in-1 reflector, gold side up since I wanted to add some warmth, while filling the 'dark'. Also, since my composition was only a portrait of her face, she was able to hold the reflector for me (below, left). You can see how much darker her face appears overall when we didn't use the reflector (below, middle), as compared to the photograph with the reflector (below, right).
Nikon D2X, Nikkor 70-300mm at 240mm f/8 @ 1/250 second, 200 ISO

My Dad has great hands and following a trip to the local grocery store where we picked up some tomatoes and after we 'dirtied' up his hands a bit, it was time to make an exciting 'portrait', and again with the aid of my 5-in-1 reflector. This time I had one of my assistants hold the reflector, again gold side up, and take my word for it; without the reflector, the underside of his hands would be 'in the dark'!
Nikon D300S, Nikkor 70-300mm at 280mm, f/11 @ 1/160 second, 200 ISO 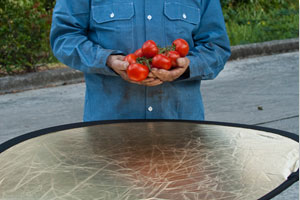 Located along Chicago's eclectic Western Avenue, Manny's Used Cars is one of the many mom-and-pop businesses on the street that demonstrates Chicago's diverse culture. Manny said "no thanks" to my photo request but was quick to offer up Jorge, one of his salesmen. Working in the direct sunlight of mid-day, I wanted to elevate Jorge as well as shoot him from down low, as he looked up, so I placed him on a ladder. As you can see in the first image, the light on Jorge's face is harsh. In the second photograph, the light on his face is softer. How come?

In the set-up photo (below, left), you can see my assistant, Jim, holding a my Nikon Speedlight SB-900 and in this instance I only using the diffuser panel of the 5-in-1 reflector. When the flash fires through this diffuser, we turned the normally unflattering light of a bare, direct flash into a softer, more flattering light. The diffuser spreads out the light so it isn't such a direct beam on the subject's face. As the second image shows (below, right), the soft and diffused fill flash did a nice job of reducing the otherwise harsh light of mid-day that was falling on Jorge's face.
Nikon D300, Nikon 17-35mm at 35mm, f/16 @ 1/200 second, 200 ISO

Combining both available light with the 'sunlight' of your flash looks like a complicated affair, when in fact the only complication that may arise is one's inability to fully understand that the light from your flash is no different than actual sunlight!

Following a very early start and several hours of shooting lavender fields, my students and myself had taken a welcomed coffee break in the small town of Pouimousson, which sits atop the Valensole Plain in Provence, France. Everyone was thrilled to finally get their morning cup of Joe, including one of my students, Dennis. As I was sitting at the other end of the bar with several other students, I was quick to notice the extreme contrast in the rather dark café and the much brighter street behind Dennis. I then explained to several of my students just how easy it is to combine both the available light exposure of the outside street with the 'sunlight' that we would soon be lighting Dennis with.

What depth of field concerns IF any do we have? In this case, I wanted some detail of the street outside and beyond Dennis, so I suggested we use f/16. I then determined, as you can see in the set-up shot (below, left), that the direction of the flash would be essentially front-lighting Dennis, and also the flash would be fired through my small 5-in-1 reflector, using only the diffuser, which would spread as well as soften the light falling on Dennis. I then rotated the dial on the back of my flash until f/16 was indicated and noted that a flash to subject distance of 9 feet was being indicated. But, experience has also taught me that when shooting my flash through a diffuser I lose about one-stop, and to compensate, I need to cut the flash to subject distance almost in half. As we can see in the set-up photo, and with the help of one of my students, Betty Spann, the flash is about five feet from Dennis.

With my aperture on the lens set to f/16 I simply take a meter reading of the available light out on the street, by simply pointing my camera and 70-300mm lens to the large bright window at the end of the bar. As I adjusted my shutter speed a 1/160 second was indicating a correct exposure. As you can see in this second example, a correct exposure of the outside available light is recorded BUT Dennis is rendered as a silhouette since NO flash was used as yet (above, middle). However, and again, with my lens still set to f/16 and my shutter speed still at a 1/160 second, I am able to render this pleasing portrait of Dennis enjoying his cup of Joe at the bar simply because the 'sunlight' from my flash had fired, thus illuminating Dennis (above, right).
Nikon D300S, Nikkor 70-300mm @100mm, f/16 @ 1/160 sec, 200 ISO