Mention the words "Golden Hour" to a group of people and you're likely to either get a confused look back or someone's heart attack survival experience.  Many people equate the term "golden hour" to that first hour after a cardiac event that is critical to survival.

But in the terms of photography, the golden hour has a totally different meaning.  It refers to the first and last hour of daylight each day.  For outdoor photographers, this time period is crucial to quality image taking.  In fact, many nature and wildlife photographers won't even carry a camera during the remaining daylight hours. 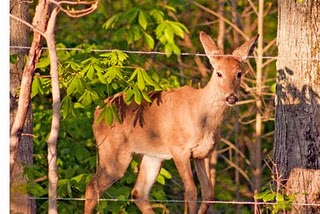 The first and last hours are so critical because during these times, sunlight has a very soft and warm look that can't be duplicated any other time of day.  This look comes from the fact that much of the light comes from indirect light reflecting through our atmosphere rather than direct light from the sun.  Also, the shadows are longer and allow for more artistic expression.  Because of the indirect lighting, the shadows aren't quite so dark and harsh as they are during mid-day.  This deer photo was taken right at the end of the dawn golden hour and as a result, the shadows don't conceal critical elements of the deer image, such as the whiskers underneath the nose and mouth.  If the sun was directly overhead, the entire lower jaw, neck and belly would be completely shadowed, and the back of the deer would likely have a lot of detail lost due to the dominating overhead light. 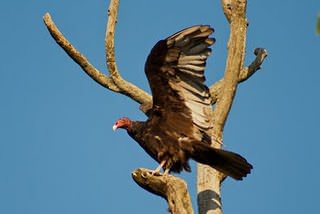 In this photo, I wanted to try to bring out the detail in the underneath portion of a turkey vulture's wings.  Obviously, to do this, the vulture had to have its wings extended and the light had to be from a lateral source rather than overhead.  A flash wouldn't have worked due to the distance I was from the bird, so I had no choice but to find a vulture high in a tree right at dawn in order to catch the sun as low in the horizon as possible.  As a result of the dim light, I had to adjust my ISO (light sensitivity) settings to have a fast enough shutter speed to avoid blur.  The trade-off for this is a little more digital noise in the photo but without the noise, I probably couldn't have pulled the photo off.  I could have minimized the situation some by using a tripod, but in this case it just wasn't possible.

It doesn't really matter if you are a morning or evening person, there is a golden hour just waiting on you.  Grab your camera and tripod (along with some bug spray) and go experience that magical hour where the animals are active and the lighting is inviting.  If you don't take the photos you had hoped for, the scenery will be awesome.