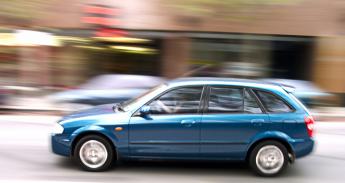 To give digital photographers the grand array of features and capabilities found on most digital cameras, the various mechanisms inside the camera require a certain amount of time to operate. Auto-exposure and auto-focus, for example, may seem to occur instantly, but they don’t. This period of time, during which the camera is working its magic, causes shutter lag. This is a challenge for many beginner or amateur photographers with compact cameras. They experience shutter lag when they compose a picture of subjects or objects in motion, thinking they will capture that image. They then press the shutter release, but by the time the camera actually registers the image, the subjects have moved and the camera doesn’t produce the picture the photographer expected.

You’ll understand shutter lag better with this quick experiment. Go to a quiet space with your camera and press the shutter release slowly. You should soon hear (and likely feel the vibrations through the camera body) of the auto-exposure and auto-focus motors operating. The camera starts this process before the shutter release button is depressed completely, which then causes the image to be registered.

You can use the way the shutter release button works in combination with the motors to help you control shutter lag. When you’re ready to take a picture, push the button only halfway and hold that position, which will activate these motors. Wait until the various functions and modes have made their selection, and then press the button the rest of the way.

The following panning exercise is another experiment that will help you understand shutter lag and know when it is likely to happen. Take your camera outdoors and look for a dominant vertical line created by the side of a building, a signpost, etc. Position yourself, so the vertical line is outside the frame of the image. Then, pan your camera through an approximate 50-degree arc in the direction of the line until it just enters that side of the image. Practice this movement until you can pan your camera consistently through multiple runs.

Then, you want to use the same technique to learn how to control the shutter lag, so you capture the picture you actually want. The difference is that you pan the camera from the other direction. When the vertical line is positioned where it was in your first image, release the shutter, so the line appears at the edge of the frame.

Most of the photos that are affected by shutter lag are casual images, when a photographer is trying to capture people at the spur-of-the-moment in the midst of whatever they are doing. Children playing on the lawn, your dog chasing a stick, candid images of people at parties, etc. With practice, you’ll be able to improve your ability to anticipate the picture you want and press the shutter before it occurs.

Another method you can use to take the picture you want is to stage or direct your subjects just a bit, but still keep it candid. If you’re children are running and playing in the backyard, ask them to stop for a moment and stand with their backs to you. Tell them you want them to turn and face you when you speak their names. Press the shutter release button as they turn and the results should be a nicely framed, casual portrait of your kids, with very natural looks on their faces. This technique doesn’t give the subjects much time to react to the camera, compared to staring at it, so their facial expressions have the look of being photographed unexpectedly, which is your primary goal. You’ve manipulated the situation just enough to induce spontaneity.

Digital cameras are packed with so many features and capabilities that one may compensate for another. That is the case with the continuous shooting, or burst, mode on your camera. Select this mode, frame the action and keep the shutter release button fully pressed, and you’ll record a series of images in succession, much like looking at a motion picture as a string of still images. If you’re children are jumping and running, then shoot a burst of images and you will likely take one that is a winner. A number of them may be worthless because of shutter lag, but one or two will be perfectly timed and result in an almost perfectly framed photo.