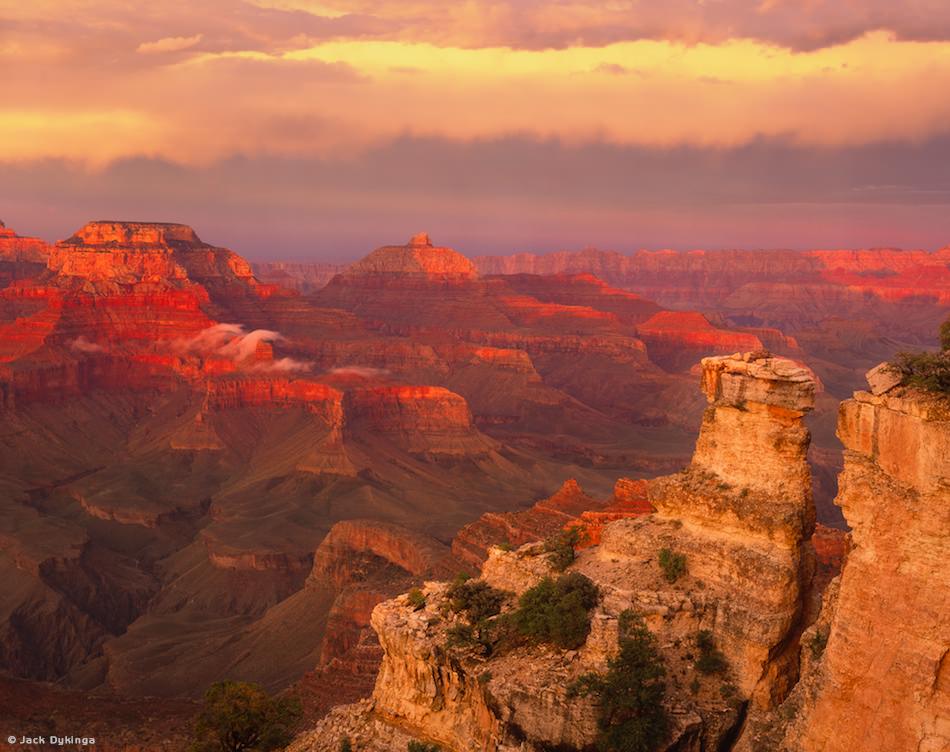 1. Jack Dykinga is recognized as one of the finest landscape photographers in the world. He has won the Pulitzer Prize for this work because he is able to merge fine art photography with documentary photojournalism. He is a regular contributor to Arizona Highways and National Geographicmagazines.

3. He is also known for his book, Large Format Nature Photography, which has served as an excellent “how-to” guide for many budding color landscape photographers.

4. Images: Jack Dykinga’s Grand Canyon, released by Arizona Highways during May 2008, is another book that celebrates his very special relationship with this natural wonder.

5. During his interview with PhotographyTalk.com, Jack explained that although the Grand Canyon is one of his favorite places to visit and photograph, he always considers his favorite place wherever he happens to be pointing a camera at any given moment.

6. Evidence of his philosophy is supported by the fact that he thinks the best photograph he ever took is an image in his Stone Canyon photo book, not the Grand Canyon.

7. He quickly added that what makes the Grand Canyon special, and a rafting/photographing trip on the Colorado River, in particular, is the unexpected vistas that appear around every bend of the river and how participants in one of his workshops respond to the experience, personally and photographically.

8. “Our purpose may be to photography the Canyon and share the images we shoot,” said Dykinga, “but what I treasure are the relationships I am able to establish with the participants. After all, when you raft the Colorado for 10 days, everyone must depend on each other not only to enjoy the trip, but also to survive. That makes it an experience you never forget, even if you’ve done it more than once, as I have.”

9. Jack said that what he particularly enjoys is observing how people who come from big cities and can’t live without their smart phones react to shooting rapids and becoming part of a wilderness-excursion team.

He said it’s often amazing how people who normally lead fast-paced lives are eventually able to surrender to the peace and tranquility of the Colorado and the Canyon by the end of a trip.

10. Jack is planning a new rafting/photography adventure on the Colorado from May 3–14, 2012, as another of the exciting and photographically intensive Visionary Wild workshops.

11. “The workshop is organized, so we stop at specific campsites at the end of the day that offer great photo opportunities during evening hikes,” said Dykinga. “Our workshop participants are both wealthy individuals and serious photographers that have saved for just this once-in-a-lifetime trip. Despite their differences in background or social status, they are all united by a desire to become a better photographer.”

12. Jack added that many of the photographers who join Visionary Wild workshop trips are able to take good technical images, but they’re not yet creating unique photos.  He said one of the techniques he tries to teach is developing the ability to “see” a different vision and not just shoot duplicates. He has observed that the more accomplished photographers understand this principle, at least partially, as they tend to spend more time watching the natural environment and how the light changes instead of immediately firing their camera.

13. Justin Black, a co-founder of Visionary Wild with Jack, will once again serve as the trip leader for the May 2012 workshop. Justin is also a well-respected photographer, having been published in National Geographic Adventure, Sierra, Outdoor Photographer and many other magazines.

14.  “Justin is simply the best trip leader with which I’ve worked,” commented Dykinga. “He has an uncanny gift for guiding students and is always well-prepared.”

15.  Jack was asked if he had any advice for photographers. “My simple answer is to work slower, especially when shooting landscapes. This is a type of photography that requires contemplation and absolute concentration on composition and light. Too many photographers are willing to rely on digital technology to do most of the work. The technology is very helpful; however, the average photographer doesn’t spend enough time discovering the essence of a place and then transferring that discovery into an image.”

16.  Jack followed his own advice, as he shot with large-format film cameras until a few years ago, but finally gravitated to DSLRS when they started to be built with 24-megapixel sensors.

17.  Jack has clearly earned the respect of the world of photography, as he was hurrying to London following this interview to give the keynote speech at WildPhotos 2011, the largest nature photography symposium in the United Kingdom and held at the Royal Geographical Society. There, the world's leading wildlife and environmental photographers will listen to Jack’s “The Power of Images – from Damnation to Celebration.”