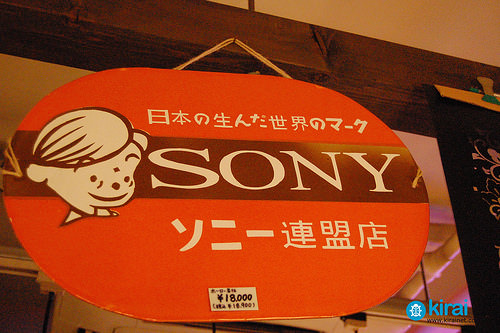 Sony Corporation is one of very few companies, of any type, that can claim to have virtually invented an entire industry. Within the first 50 years of its existence, Sony has introduced the transistor radio, the Trinitron television, the Betamax VCR, the Walkman portable cassette player and the Mavica, the world's first commercial color video camera to utilize a completely solid-state image sensor. All of this revolutionary research and development has lead to Sony being the second largest digital camera manufacturer in the world (Canon is first) and one of the top global and iconic brands.

Sony’s beginnings are quite similar to many Japanese companies that emerge from World War II committed to rebuilding the country and finding new international markets for their products. Sony was actually born among the rubble of Tokyo.

During the war, Akio Morita, a weapons researcher, first met Masaru Ibuka, a defense contractor, while developing a heat-seeking missile-guidance system and a night-vision gun scope. After the war, Ibuka worked as a radio repairman for a bomb-damaged Tokyo department store. Morita found him again when he read in a newspaper that Ibuka had invented a shortwave converter. During May of 1946, the two men established a partnership with $500 in borrowed capital, and registered their company as the Tokyo Tsushin Kogyo (Tokyo Telecommunications Engineering Corporation, or TTK).

Like many new businesses that often first operate from someone’s barn, basement, attic or kitchen, Morita and Ibuka’s equivalent was a crude facility on a hill in southern Tokyo. There they developed the company’s first consumer product: a rice cooker, which was a complete commercial failure. For its first year, the company’s total sales were $7,000, with a profit of only $300. Many of the budding entrepreneurs working in a barn, basement, attic or kitchen have experienced much the same results during their first year of operations.

Like a very few of these entrepreneurs, however, TTK found itself in the right place at the right time. The Japanese economy could only grow after the war, which increased the demand for consumer goods. Morita and Ibuka then made their first critical decision: They turned from developing and manufacturing home appliances and directed all their efforts on electronics. Inspired by the tape recorder he had seen at the Japanese Broadcasting Corporation, Ibuka created a TTK model. To market the tape recorder successfully, they needed a “hook”; and Ibuka found it when he stumbled across a U.S. military booklet titled Nine Hundred and Ninety-Nine Uses of the Tape Recorder. He had it translated into Japanese, providing the country’s emerging consumers with all the reasons they should by a TTK tape recorder. This marketing coup was the company’s first great success; and it had to move to larger facilities to manufacture more tape recorders.

One of the customers for TTK’s tape recorder was the Japanese Academy of the Arts and a student there was about to become the third member of the founding of Sony. Norio Ohga was an opera student at the academy. He didn’t like the sound quality of the TTK tape recorders at the academy and wrote several letters to the company telling them so. Instead of dismissing Ohga as a hothead student, Morita took notice of his well-reasoned arguments for improving the recorder, which led to Ohga becoming a consultant for the next generation of the recorder. His input substantially improved later models.

Read Part 2 of this PhotographyTalk.com article to learn more about the history of the Sony Corporation. (Coming Soon)