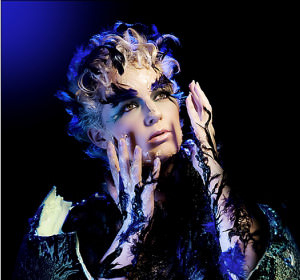 When it comes to merging two separate images together for seamless results, consistent lighting is key. You may be a wiz at digital manipulation, but if the lighting elements in each shot don't match, your results will most likely look contrived.

In this lesson, commercial photographer Billy Pegram shows us how he created these beautifully executed conceptual images to promote the work of a master hair dresser.

I recently took on a conceptual project that involved creating dynamic art pieces for Master Hairdresser Steven Christian, located in Tacoma, Washington. My idea was to have a model emerging from an emu eggshell, where the focus would be on the model's face and hair. I came up with the idea one Saturday when I happened upon some emu eggs being sold at a local farmers' market.  The vendor kindly ended up giving me a few eggs that were cracked.

I decided to shoot the model and the eggs at the salon, which is located inside a beautiful 100 year-old building. The main room is also equipped with backdrops and rigging for photo sessions of the work that gets created there. [Figure 1]

After deciding where in the room I would shoot, I got some help moving a 4'x8'x13" elevated platform into position.  I then suspended heavy black felt material, which would serve as the background. This black felt also functions as a divider for private sessions. [Figure 2]

I then covered the platform with a drop canvas (and then later, newspaper) to help absorb the liquid mess from the 8 pounds of hair gel that would be used, along with water from spray bottles.

Next, I suspended emu egg-colored mosquito netting from the ceiling with ropes. The plan was to have the model step into the netting and pull it over her body, onto which gel and feathers could then be applied. [Figure 4]

Sometimes I tape colored gels onto the interior diffusion baffles of my soft boxes, and here I taped some inside the HalfDome I was using.  [Figure 5]

Photoflex includes gold/silver interior panels for both its OctoDome® and MultiDome soft boxes, which work beautifully, but there are times when I want to vary the color of the light from within different areas of the soft box.  As you might imagine, this is only effective when the soft boxes are extremely close to the subjects.

I wanted the model's skin and hair to be rendered with a dramatic blue tone to match the egg color, so I set the White Balance to Tungsten lighting.  This adjustment would make the light from the strobe excessively blue, rather than neutral. But with warming gels taped inside the HalfDome, as well as onto the main hard light, I would be able to control the color from becoming too blue.

Here are two shots of the set before model was in position.  The only difference is that the first was shot with the White Balance set to Daylight (5600K), whereas the second was shot set to Tungsten (3000K). Notice how the window light in the background has shifted from a neutral tone to a dramatic blue. [Figures 6 & 7]

Here are the other camera settings for these shots:

Fortunately, the make-up for our model, Karrin, was already complete when she stepped onto the set and into the netting, and the hair was completed during the time it took me to set up my lighting. [Figure 8]

Here's the final lighting setup for this shoot:

I had the HalfDome, powered by a StarFlash 300, positioned off to the side to spread light evenly across the body (I didn't know how much of the body was going to show above the egg shell). By placing it to the side like this, it brought out the texture of the feathers.

The main light was simply a StarFlash 300 with a 7" reflector and 40° Grid attached (to throw a narrow channel of light) with a diffusion gel and a warming gel taped over it.

The back/hair light was a StarFlash 150 also with a 7" reflector and 60° Grid attached. Additionally, I added a blue gel to this light attached to intensify the blue light further. [Figure 9]

Once everything was in position, I asked Karrin for some specific poses. She did a wonderful job in expressing the "just hatched" look I was going for and I had several images from which to choose for the photo merge. [Figures 10 & 11]

After the shots with Karrin, we cleaned up the set a bit and then brought in a shooting surface for the eggs. I kept the lights in the same relative position so that the photo merge would look believable. [Figures 12 & 13]

After the shoot, I spent some time compositing the images. As it turned out, the merging turned out to be a piece of cake, thanks to the matched lighting conditions. Much easier than I had anticipated! There were many composites that turned out great, but these ended up being my favorites. [Figures 14, 15 & 16]

As you can see, the results look seamless. This project was a lot of fun and everyone at the salon was thrilled with the results.

It's always a thrill to bring to life that which you envision. When you have the proper tools for the job, and an understanding of how those tools work, anything is possible! Remember to experiment with your techniques, but above all, have fun in the process!

Photographed and written by Bill Pegram, contributing instructor for PhotoflexLightingSchool.com