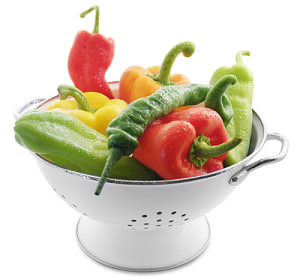 In commercial photography, there is a particular type of shot that lends itself to web and print layouts, which is called the "silhouetted shot." If produced correctly, the object will appear to be sitting in a white room surrounded by light. It is a very clean style because it looks natural on a white page and is not confined to a square or rectangular frame.

Much of the success of a silhouetted shot is dependent on lighting, which to many might seem complicated and expensive. As you'll discover in this lesson, however, this does not necessarily have to be the case.

This lesson demonstrates how to create a natural-looking silhouetted shot with very simple and inexpensive lighting tools and a little digital editing.

To demonstrate the silhouetted technique, we decided to photograph a strainer full of peppers. For comparison sake, we started with taking pictures of the peppers the way most people would tackle such a shot.

After arranging the peppers in the strainer, we placed the strainer on a dining room table, mounted a digital camera to a tripod and framed up the shot. In this situation, the light from the windows would serve to illuminate the shot.

Once the shot was framed up, we set the aperture to f/18 to ensure adequate depth of field and adjusted the shutter speed to render a good exposure, which in this case was half a second (figure 2).

The result shows a fairly natural looking result, although there is quite a bit of contrast to the shot, even though it is lit with indirect window light. Notice how bright (and over-exposed) the strainer is on the left-hand side, while the peppers on the right-hand side are hidden in shadow.

Next, we decided to use the flash of the camera to show how this lighting would affect the shot. After enabling the flash, we set the Exposure Mode to Auto and took an exposure (figures 3 & 4).

As expected, this type of lighting has produced a flat, unnatural look to the peppers. Because the light from the flash is traveling in the same direction as the lens, it tends to flatten out any sense of dimension. While everything is illuminated adequately, the quality of light is that of headlights in the dark -- not exactly the look that makes the mouth water.

Next, we decided to bring in some simple Tungsten lights in order to better control the lighting of the shot.

We used the Photoflex First Studio Product Kit, which comes with two lights, two light stands, and a medium LiteIgloo shooting enclosure (which you'll see later in this lesson). We first brought one light from this kit to the right of the peppers and angled it to illuminate them from the side (figure 5).

When the light was where we wanted it, we disabled the flash on the camera, set the White Balance to Tungsten, or 3000K, to color-balance the camera for Tungsten lights, set the Exposure Mode back to Manual Exposure, adjusted the shutter speed for exposure and took another shot (figure 6).

This result is similar to the first window light shot in that the contrast is very high. With the small light source to the side, its "hard light" rakes across the peppers to create both bright and dark areas of the shot. Also notice the reflections in the peppers: small and bright. Had we been using a larger light source, like a large soft box, these reflections would be larger and softer and the light would "wrap around" the peppers in a smooth, gradual way.

In an attempt to reduce the contrast somewhat here, we decided to bring in the second light to the other side of the set. This light would fill in the shadows cast from the first light. Once this was in position, we took another shot at the same exposure settings (figures 7 & 8).

As you can see, these two lights together help to illuminate every area of the peppers. And because these lights are both placed 90-degrees to the camera, they do a much better job at creating dimension to the shot, as compared to the built-in flash example, where the light is traveling at the same angle as the lens.

But even though the peppers are illuminated well in this shot, the quality of the light is not representative of light that would be flooding a room. And because we wanted to create a shot that feels like it's in a soft white room, we needed to modify the light to further develop the shot.

Diffusing Light With A LiteIgloo

What do you do when you don't have a room illuminated with light? You bring the room to the set! For photographers who don't have a lot of money to spend on multiple lighting fixtures and large soft boxes, Photoflex has created the LiteIgloo, which is included in the First Studio Product Kit. The LiteIgloo is a foldable shooting enclosure that has walls made from a translucent diffusion fabric. This is the same fabric used in soft boxes, and works to diffuse "hard light" in the same way.

To illustrate, we first placed the peppers into the LiteIgloo (figure 9).

For the first shot with the LiteIgloo, we turned on only the left-hand light, adjusted the shutter speed for exposure and took a shot (figure 10).

Next, we turned on the other light and took a shot at the same exposure (figure 11).

As you can see from the result, the peppers are now beautifully illuminated on all sides while still maintaining a nice sense of dimension. You could stop here and have a great shot to drop out the background and place on a white page.

Backlighting For A Natural Look

However, in this case we wanted to finesse the light a little further to create an even more authentic looking shot. Some of the most convincing "silo" shots are the ones in which the subject matter is backlit. This type of lighting lends itself better to these types of shots as it tends to look more natural and not "cut out."

So here, we simply moved the lights toward the rear of the LiteIgloo and pivoted each one so that they both faced the LiteIgloo directly (figures 12 & 13).

The other nice thing about these Tungsten lights is that they are continuous (no flash to contend with), so what you see is what you get.

After we repositioned the lights, we came around to the front and peered into the LiteIgloo to see how the light was looking on the peppers. After doing so, we repositioned one of the lights slightly, found the lighting we wanted and took another shot (figure 14).

The result shows a beautifully backlit shot that is even more dimensional than the previous result.

Once we had the lighting where we wanted it, we decided to enhance the shot even further by adding fresh mist to the shot, as well as dropping out the background digitally with an image editing program (figure 15).