Elevating the Quality of Your Product Shots 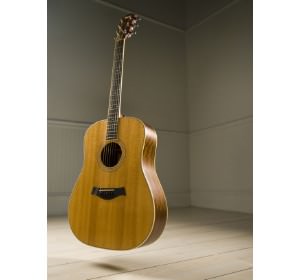 When it comes to taking commercial product shots in this day and age, you need to bring your A game. From concept to execution, the modern day client expects you to wow them. After all, there's a lot of competition out there.

But wowing them doesn't mean you have to break your back (or bank) in the process. This lesson demonstrates that with a simple lighting kit, a reflector kit, and a little know-how, you can deliver the goods to build your client base.

For this lesson, I wanted to demonstrate some simple lighting techniques for photographing a guitar. Rather than use a fabric backdrop or seamless background paper for the shot, I decided to keep things simple-yet-interesting and shoot against my studio wall.

The walls in this studio are similar to those in other photo studios in that they have a patchwork of styles to accommodate various shooting projects; One wall is comprised mainly of windows, another is just painted sheet rock, while another has wainscoting up to simulate a room scene. This is the corner I decided to use for this shot. [Figure 1]

As with many studios, however, the floor here is made of cement. And while a cement floor holds up well under the duress of transitory lighting equipment and props, it does not lend a very "lived-in" or domesticated feel to these types of room scenes.

For this very reason, we have a rack of various types of wooden flooring we can choose from to create a specific look-and-feel to a room scene. [Figure 2]

For this shot, I decided to go with a light-toned ash flooring and simply laid each piece onto the floor, starting at the corner. [Figure 3]

Once I had the flooring in place, I put my acoustic guitar on its guitar stand and placed it on the floor so that I could rough in the composition. Using just the available window light in the studio, I took a test shot to review. [Figure 4]

In looking at the result, I realized that the black guitar stand was a pretty distracting element for this shot and pondered some other ways of keeping it upright. In the end, I decided it might be graphically interesting to have the guitar appear to be floating just inches off the floor.

To do this, I set up a Photoflex Boom and Boom Stand and rolled it out to the side of the set. I attached a Photoflex RockSteady bag (filled with sand) for counterbalance and used heavy gauge fishing line to suspend the guitar from the Boom. [Figures 5 & 6]

To make sure the guitar was suspended securely in place, I tied a bowline knot at each end of the fishing line. This type of knot ensures that the line won't slip. [Figures 7 & 8]

Once the guitar was securely suspended, the next trick was to prevent it from spinning on axis. So, I simply pulled out some duct tape and another section of fishing line and taped one end to the back of the guitar. I then angled the guitar where I wanted it and anchored the other end of the fishing line to the floor. This kept the guitar from rotating. [Figure 9]

With the guitar in place and using just the available window light, I took another shot. [Figure 10]

As you can see from the result, the guitar looked better suspended from the fishing line, but with respect to the lighting, I was somewhat limited with what I could do.

For comparative purposes, I decided to activate the built-in flash of the camera in order to illuminate the front shadow areas of the guitar. [Figure 11]

Although the flash did well to illuminate the front of the guitar, it also flattened out the overall lighting of the shot and created a hard, distracting shadow along the floor and back wall. Needless to say, it was time for some better lighting.

I knew that I wanted to keep the lighting simple, so I decided to use a two-light kit to light the guitar and room scene. The kit I opted for was the StarFlash 150 Dual LiteDome Kit, which is comprised of two SoftBox kits: one medium and one small.

I first set up the medium kit and placed it off to the left of the guitar. I decided to close the curtains to better gauge the effects of the new lights. When everything was synced up, I took another shot. [Figures 12 & 13]

When I looked at the result shot, I saw that the soft box was partially reflected in the front of the guitar and blowing out the texture of the wood. To prevent the soft box from reflecting in the wood, I simply raised the soft box up slightly and repositioned the LiteStand a little further to the left. I left the modeling light of the StarFlash on so that I could see the effects of the light before I took the shot.

Confident that this new angle would do away with the reflection, I took another shot. [Figures 14 & 15]

As you can see from the result shot, the soft box reflection has been eliminated and the overall lighting on the guitar looks good. Not a bad result for one light.

But for this shot, I wanted to create a little more separation between the guitar and the background, and the best way to do this is through "rim-lighting". I decided to reconfigure the current setup. In this case, all I had to do to create rim lighting was to bring the soft box back even further toward the wall and angle it back toward the guitar. After the light was repositioned, I took another shot. [Figures 16 & 17]

Now the shot -- and particularly the front of the guitar -- looks relatively dark. But remember what the objective here was: to create rim lighting. If you look along the left edge of the guitar, you'll see that it is illuminated nicely and makes the guitar pop off the background.

Next, I decided to set up the other half of the soft box kit and position it on the other side of the set and the same relative angle to create rim lighting on that side. Once that light was set up and synced, I took another shot. [Figures 18 & 19]

Now, the rim lighting is balanced on both sides and really helps to draw the attention straight to the guitar. Also note that while there are double shadows on the floor cast from each of the lights, they are soft and subtle and don't really detract from the shot. I also realized I would need to address the visibility of the fishing line.

In reviewing the shot at this point, I liked the effect of these two lights, but thought that the front of the guitar was still a little dark. But rather than set up another soft box, I decided instead to simply bounce some of the light from the small kit into the face of the guitar using the new Photoflex LitePanel Kit.

The new LitePanel Kit consists of an aluminum shock-corded frame, a Crossbar, two 39x72-inch fabrics (a White/Translucent and a Soft Gold/White), a medium LiteStand, A GripJaw, and a Grip Swivel. With the new addition of the GripJaw and the Grip Swivel to this kit, you can angle a LitePanel at just about any angle you can imagine.

For this situation, I wanted to angle the LitePanel slightly downward to bounce light into the guitar. And the simplest way to do this involved using a Background Stand in conjunction with the Grip Swivel and GripJaw.

This warm, reflective panel was perfect for what I was trying to achieve, as it does a great job in reflecting warm light into wood. The White side has a tendency to wash out the warmth of wood in these types of shots, and as a result, many commercial product photographers opt for the warmer fabric to render their wooden products with a richer tone.

With the LitePanel secured exactly how I wanted it, I positioned it in close to the left side of the guitar and double-checked the angle to make sure it reflected the light from the small soft box. [Figure 24]

For this next shot, I decided to bring the camera down for a lower perspective. Maintaining the same camera settings, I took another shot. [Figure 25]

At this point, the lighting seemed balanced to me. There was a nice amount of warm light on the front of the guitar and the rim lighting made it really stand out from the background.

Later, after I had downloaded this image to my computer and opened it up in Photoshop, I took a few minutes to clone out the fishing line, duct tape and imperfections on the floor and wall, and ended up with a nicely lit, unique take on a guitar product shot. [Figure 26]

Once I had the lighting set up, I spun the guitar 180° and shot the back side. Here's the result after editing out the fishing line, etc. [Figure 27]

Nothing changed with the lighting for this last shot. In fact, next I came in tight and take a series of detail shots, all with the lighting where it was. The only change here was the position of the camera. [Figures 28, 29 & 30]

As you can see from the results, it's really not that hard to bring your product photography to the next level. All you need are the right lighting tools and an effective lighting strategy.