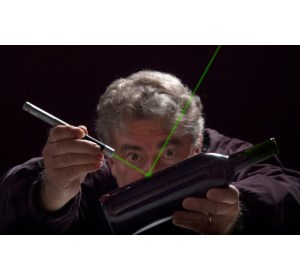 Almost all photographs are simply a record of reflections. Unless your camera is pointed directly at a light source, like the sun or a light bulb, you’re photographing light reflecting off of a surface. The surfaces might be skin, water, leaves, flowers, clouds, buildings, even the sky, but they’re all reflections.

We don’t think about the physics of light and reflections very often, but a basic understanding of light theory can be helpful. Learning about this aspect of lighting all begins with the phrase: The angle of incidence equals the angle of reflection.

This often mentioned law of lighting physics is easily demonstrated, as in the photo of me holding a laser pointer, but how can it be used for creative purposes? In this lesson we’ll show you how the angle of incidence works in scientific terms. Then we’ll provide solutions to problems that arise from unintended reflections. Finally, we’ll explore the useful and fun aspects of the angle of incidence.In this simple diagram we see that a beam of light enters from the left, strikes a surface, and exits to the right at the same angle. That’s the most basic illustration of the concept, but as we’ll see, there’s a lot more to consider. (figure 1)

‘On-axis’ flash, creating the ‘bounce back flash’ that frequently ruins photos, is shown in fig. 3. The hotspot of light from a surface behind our subject perfectly illustrates that a flash aimed directly at a wall or window (on-axis) will bounce directly back at us. (figure 3)

Taking a few steps to one side or another causes the (camera mounted) flash to hit the background surface at an oblique angle, so the light misses the camera when it bounces back. In the diagram of figure 4 we see that the camera is now off-axis from the wall, and the reflection from the camera flash is no longer bouncing back into the lens. (figure 4)

Figure 5 shows the improved result when we change an on-axis flash to an off-axis flash. (figure 5)

However, there may be times when you may want the wall on axis behind your subject. Some situations with an on-axis background include photographing flat art, showing a person in front of a large window, or showcasing a feature of an architectural interior.

Shooting directly into an on-axis background is easily accomplished by using an off-camera light source positioned to the left or right of the camera. As long as the light is off-axis from the background, the hot spot will not appear in the photo. In fig. 6, we see a typical setup where the shadow of the subject and the incident reflection are avoided. In addition, we’ve added a 22 inch LiteDisc reflector to bounce some of the stray light onto the dark side of our subject. (figure 6)

In figure 7 we’ve used an extra small OctoDome® with a StarFire™ flash to the right of the camera to light our subject. Even though the camera is on-axis to the window, the flash is off-axis, so the flash bounces off the window at an angle and misses the camera.

The result in figure 7, compared to our original shot in figure 8, shows a dramatic improvement. Avoiding the direct incident angle of light has improved the color, defined the shape of the subject’s face, avoided the flashback in the window, and created a more natural feel to the photo. (figure 7)

In figure 8 we see a wide shot of the setup for figure 7. In review, the set up accomplishes two goals: The light source does not bounce back into the camera, so that we are allowed to look directly at the window. The shape, color and lighting ratio of the model is greatly improved because the light is coming from the side. (figure 8)

The next example in this lesson is a very useful trick for using bounce flash to improve your quick snapshots. Using a standard shoe mount flash with rotating capability, you can aim the flash at a nearby wall to create attractive soft side lighting. As you can see in figure 9, the hotspot of the flash strikes the wall and bounces onto the subject.

The natural light entering through the window creates another incident reflection on the subject’s left cheek and shoulders. (Seen on the right from the camera angle.) This is another example of how the angle of reflection can be used. (figure 9)

When is it a good idea to use a direct incident reflection intentionally? Under certain circumstances with specific subjects, a direct reflection is preferred. When photographing shiny objects, such as jewelry and coins, large smooth reflections will make the metal look well made and expensive.

This setup is one of the most common approaches used by jewelry photographers, but is also useful for many types of valuables and collectables. (figure 12)

We placed a medium SilverDome® (24”x32”) with a StarLite® fixture and a 1000 watt bulb above and slightly behind the subject to create large highlights along the top of the duck’s head. A First Studio® light with a 250 watt bulb was aimed at a 39” x 39” LitePanel to create a circle of light that was reflected into the lens as it bounced off the table surface.

Next, we used a series of LiteDisc® reflectors to create various sizes of reflections on the left side of the subject. Figure 13 demonstrates how the use of incident light reflections can be easily manipulated to change the image. Note that none of these options is the “correct “ one, but they all work to illustrate the variety of effects you can achieve. (figure 13)

When every surface of a three-dimensional object is reflective, it can be a big time saver to use a Photoflex® LiteIgloo® shooting enclosure. With this clever product, the walls of the enclosure provide uniform reflections over the entire surface of the subject. For this reason, the LiteIgloo® is an essential lighting accessory for eBay sellers and catalog shooters. In figure14 we see a typical setup for using two FirstStudio® lamps with a LiteIgloo®. (Figure 14)

The elimination of dark tones is just the first place to begin the session, but it’s not what we want as a final result. With the duck covered in highlights from top to bottom, we can now choose to make selected areas of the subject darker in a process called ‘subtractive lighting.’ (figure 15)

In figure 16 we’ve subtracted light from the duck in many ways: We turned off one of the FirstStudio® lamps so one side of the LiteIgloo® dropped in brightness, creating a subtle difference between one side of the subject and the other. We moved the lights to several different positions, each time making a noticeable change in the placement of the highlights. In another approach, to create more defined areas of ‘negative reflection’. The possibilities for this approach are endless and many variations can be achieved in minutes. (figure 16)

The examples in this lesson form a basic introduction to lighting with reflected, instead of direct light. There is no limit to the tricks and techniques of this style and new techniques are being developed every day. Try your hand at incident and reflective lighting. You’ll have fun discovering its many uses.

We hope this lesson has brought more meaning to the phrase, “The angle of incidence equals the angle of reflection.”