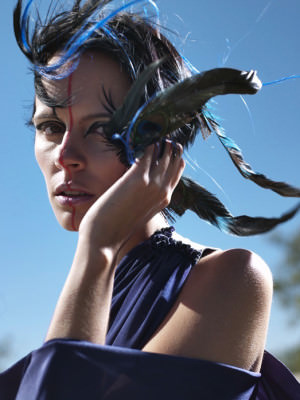 Canadian Fashion Photographer David Hou dishes up some spectacular eye candy in this very informative lesson. Hou’s choice to simplify the compositions by choosing a stark location on sand dunes is a brilliant approach. The bright clothing, artistic posing and edgy make-up are all skillfully placed upon the two-toned background for maximum effect.

His technique of using strobe and sunlight is exciting to see and easy to learn. This lesson is a "must read" for anyone who plans to use a strobe outdoors!

Sandbanks from PHOTONews Magazine on Vimeo.

My name is David Hou (davidhou.com) and I am an advertising photographer from Toronto, Canada. My assignments range from designer look-books shot in studio to national theatre campaigns and fashion editorials shot on location. Owning a compact portable lighting system is an essential component of my photographic arsenal. Recently, the fashion editor of Fashion China Magazine contacted me regarding an on-location editorial. This editorial consisted of 8-12 pages, featuring the works of a fashion designer based in London, England.

As with any fashion editorials, the primary steps of the project involved story boarding, location scouting, and model casting. I chose a young team that consisted of a wardrobe stylist, a make-up artist, and a hair stylist, all of whom excel at innovative and creative thinking. The location we decided on was Sandbanks Provincial Park, a remote beach with endless stretches of wind-swept sand dunes to offset the bright colours of the outfits. The story would evolve around the theme of a post-apocalyptic world. The model would feature the clothing symbolizing rebirth and rediscovery. The casting took place in my studio over two days. Once all the primary preparations were completed, we were off to the location shoot the following day.

Under controlled conditions, I always decide on a lighting scheme prior to the shoot day. However, with outdoor location shoots, there are dynamic weather elements one needs to consider when pre-designing the lighting scheme(s). With the location being over two hours drive away from my studio and a limited editorial budget, we had no optional rain dates. I could not rely on having the sun and I needed light modifiers that would work in high winds. The situation called for a compact portable lighting system with a short flash duration to capture action in rain or shine. The shoot also required a lighting system that could provide consistently beautiful light with or without light modifiers.

When we arrived at the location early morning, we were blessed with a beautiful sunny day, albeit a bit windy and chilly. The hike from the parking lot to the sand dunes took approximately 15 minutes, but those 15 minutes didn’t pass leisurely. Carrying the wardrobe, styling kit, make-up kit, hair styling kit, photographic and lighting equipment up sandy hills made for quite the cardiovascular workout! Fortunately, I was able to fit the entire Photoflex TritonFlash system into one carrying case, since it is so light and compact. Once everything was loaded on set, we spent the next hour clearing twigs from the set and setting up a prep area for the stylists. It was important to ensure everything was secure in the strong wind.

Setting Up The XS OctoDome

The TritonFlash kit comes with an Extra Small OctoDome, although the name is a bit of a misnomer as its diameter is 18”, which I find to be perfect for beauty shots. As its name suggests, the OctoDome has 8 rods, each attached to a corner of the provided speed-ring by a simple slide-in action. The resulting shape of the OctoDome is nearly circular, providing very pleasing catch-lights in the eyes. The quality of the light is further softened by an interior baffle and a front diffusion face. What is most impressive is the efficiency of the OctoDome itself; its silver interior provides punch, but the diffusion layers keep the quality of light soft.

For this editorial, I decided to use the TritonFlash in three different ways, depending on the condition of available sunlight and the strength of the wind. With early morning sun, I used the strobe unit fitted with the OctoDome (Medium for full figure shots and Extra Small for close up shots) as a secondary light, balancing the daylight from the opposite direction. Around midday, when the sun was up high and casting dark shadows under the eyes, I used the TritonFlash as my key light. At 300Ws and diffused with the OctoDome, the strobe was powerful enough to rid the model of unwanted shadows, while still providing an excellent rendition of skin tones. Later in the day, when the wind really picked up, I got a bit adventurous. I decided to try the TritonFlash with only the standard 7” hard reflector, which, in my opinion, is above “standard”.

Instead of the typical polished aluminum inner surface that often accompany cheaply constructed units, the TritonFlash reflector hood is dimpled and provide a much more pleasing light distribution. This was especially apparent in close-up shots. The compact size of the unit and reflector made it easy to hold the unit, even in strong wind. In each of the following three setups, only a single strobe was used. Partially, this was a personal stylistic preference. But I also had a limited editorial budget, which prevented me from hiring an entire team of assistants to hold multiple lights in position. Like many fashion photographers, I prefer to have my lights hand-held by assistants. This allows the lights to be truly mobile and specific to each of the model’s poses and movements. On this shoot, my assistant held the light by the handle attached to the strobe unit. In situations where I needed the light to come from higher angles, the unit was attached to a LiteStand that was then handheld over the model.

The dress the model was wearing was incredibly beautiful as it blew in the wind. Given the harsh sunlight, I needed some fill light on her face. I had my assistant hold the TritonFlash™ above her face to give a natural looking fill.

After the full length shot, we decided to create a beauty shot. The TritonFlash™ was used in a similar position in both cases. [Figures 4 & 5]

For the next look, I wanted to add some drama to the image, so I added a red gel to the TritonFlash™. My assistant aimed the light directly at the model’s face. Here, you can really see the difference the red gel makes. [Figures 6, 7 & 8]

For this last look, I decided to use the 7” reflector on the TritonFlash™. This provided a sharp light that added an edge highlight and really helped accentuate the material of the dress. The TritonFlash™ was so powerful that the sun became a secondary fill light source. [Figures 9, 10 & 11]

Here are some examples of this same lighting setup with a tighter crop. You can really see the lighting difference in the setup comparison. [Figures 12 & 13]

Upon completing each segment/garment, images were downloaded into the laptop computer via Adobe Lightroom® with a preset that I had previously calibrated for the camera (Hasselblad H2D with Phase One P45+ back) and lighting (Photoflex® TritonFlash™) combination. Minor exposure adjustments were made in Adobe Lightroom® to darken or brighten the images. The selected images for the editorial were processed into 16-bit Tiff files for further editing in Adobe Photoshop®.

The amount of editing in Adobe Photoshop® was kept to a minimum. At the beginning of my career, everything was shot on film and I was trained to try and capture the final image in camera, rather than relying on excessive post-production. Just as one would in the darkroom, I used Photoshop® to crop images and to adjust exposure, colour balance, and contrast. Blemishes were edited with clone stamps and healing brushes. Some dodging and burning layers were applied. This approach demanded absolute precision in lighting design. The ratio chosen between available daylight and the strobe had to be exact to create the effect wanted right in the camera. If the lighting output and colour were not consistent from shot to shot, one would need to rely on post-production to create the uniform look desired in this editorial.

The use of a compact-yet-professional caliber lighting system like the Photoflex ® TritonFlash ™ made it easy for me to faithfully create the pre-visualized storyboard in camera on shoot day. The short flash duration enabled me to capture crisp movements of the model and the garment. Consistent flash output and colour temperature meant I could create the desired lighting effects and balance in camera without relying on excessive post-production.

After the shoot, while reviewing the shots, we realized that we had so many successful shots that we decided on putting a second editorial together for submission to another magazine!