Jay P. Morgan: Turning Digital Photography on Its Head and Turning Heads in the Process 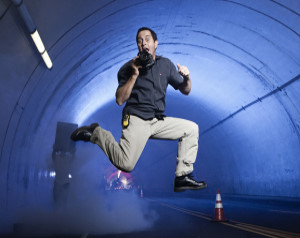 Saying that Jay P. Morgan has been a successful commercial photographer for more than 20 years doesn’t even begin to describe the visions he brings to life. He not only defies convention, but also many of the laws of physics. If he thinks pigs should fly, then he makes it happen. Such images are so believable that you might find yourself glancing skyward occasionally looking for a squadron of porkers to land on your lawn.

Morgan’s often-bizarre photos don’t seem to deter the photography world from recognizing his mad genius with various awards and an impressive list of typically straight-laced corporations from seeking his expertise to market their products and services. Companies, such as Intel, McDonalds, Pizza Hut, Nissan, Disney, the NFL, Kraft and Hewlett Packard, have flocked to his studio in Los Angeles willing and eager to put their carefully protected brands in his hands.

A photography bug infected Morgan during college, which led to attending Art Center in Pasadena, California. Although his early work was created with a 4x5 film camera, he has embraced the digital age fully. He discovered, like many professionals, that he didn’t have to hope he had a usable image a client would love. With digital technology, he could be absolutely sure before disassembling the complex sets and collaborative environment that his imagery requires.

Morgan revels in the complete creative process that must be planned, developed and executed to achieve the end product of his complex visions. Can’t you just see him starting the process much like the opening of any of the old Mission: Impossible TV shows, carefully reviewing and choosing the other professionals that he needs for each project’s team. The other trademark of his work is the complicated sets that are designed and built for the photographic portion of his creations. Because Morgan’s early photography experiences often utilized rather elaborate sets, much like a Hollywood movie, he still loves to dirty his hands making and assembling the pieces and parts.

According to Morgan, he approaches each assignment almost as more of an exercise in problem solving than photography. He is always making sketches of whatever humorous and interesting scenes and occurrences fill his life, which he uses to fire his imagination and stretch it to the fullest. Just because his final vision requires more than a camera, he hasn’t surrendered to computerization entirely; in fact, he says approximately 80% of his vision occurs in the camera. Typically, Photoshop’s contribution is to allow him to create a background and/or environment for his photo that takes it beyond the everyday to a place that usually only exists in his mind. It appears that his surreal style has also influenced his clients because some of them approach him with ideas that one wouldn’t expect from a corporate type. No doubt, they like to escape from the corporate world to play in Morgan’s sandbox too.

Because Jay Morgan didn’t hesitate to embrace digital photography, he was particularly attracted to cameras, such as the Canon 5D, with both still photography and video technology. The video capability of these DSLRs makes it easy to shoot footage of how his teams create client projects. Another synapse fired in his constantly sparking brain to put these behind-the-scenes productions on a separate Web site to teach others the techniques he was using. This site is TheSlantedLens.com. Equipment manufacturers and other companies support the site, so the contents are free to anyone who wants to learn (and dares to be exposed) to the “slanted” thinking and creativity of Jay P. Morgan.