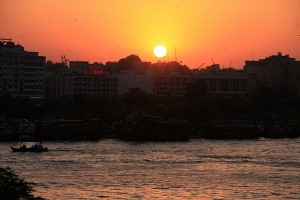 1.   Many beginner photographers find it easy to rely on the “default” flash method during a bright, midday outdoor scene. They leave the flash attached to the camera and let the TTL technology project enough light to illuminate the subject correctly, especially so his or her eyes are not dark ovals, like a raccoon’s.

2.   This does result in a “correct” exposure and typically pleasing images, but much more creative photos are possible when using the flash off-camera. A simple three-step process will help you control both the ambient light and the flash’s output, which leads to various lighting choices, including the crosslighting effect.

4.   The first off-camera flash/ambient light setup you can try is positioning your subject with the midday sun behind him or her. You want the sun itself beyond the frame and directed from either the right or left back angle. Make tiny adjustments of the subject, in relation to the sun behind him or her, until you find a position where the light hits the side of the subject’s body and/or head at a very slight angle. This will create more separation or depth between the subject and background, and provide you with some very pleasing and flattering lighting effects.

5.   Select the maximum sync speed, so the aperture will be at the widest setting. Then, determine the correct exposure for the background light, which means you’ll be adjusting the aperture manually.

6.   Remove your flash from the camera, set the flash at half-power and hold it at a 45-degree angle above and six feet from your subject, so the light illuminates the subject opposite the direction of the sun. Shoot a test frame or two to determine if you should move the flash closer to your subject if not enough light is hitting him or her. If the light from the flash appears to be too bright, then decrease flash power to 25%.

7.   Another way to light the subject and the midday-lit scene is to use the flash as a bit of a backlight. You are creating a crosslighting effect with the flash and the angle of the sunlight from the opposite side behind the subject. Once you’ve found the accurate exposure, you can then create different looks with the flash at different angles and heights in relation to the subject.

8.   Next, try to create an almost 3D effect with the crosslighting of the sunlight and light from the flash. This begins with using the technique explained in the PhotographyTalk.com article, 10 Ideas about Creating Completely Different Images with a Flash During Twilight.

9.   You purposely underexpose the background by maintaining the sync speed for your flash/camera and selecting a narrower aperture. You then increase the flash power or move it closer to the subject to be in balance with the smaller aperture. This straight crosslighting, 3D effect occurs when your camera’s angle is a fourth or three-fourths to the lights.

Feel free to visit our lighting and flash forum