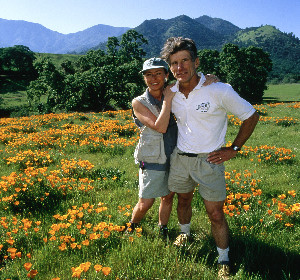 Although Galen Rowell and his wife and partner, Barbara, were tragically killed in an airplane accident during 2002, traveling to their next wilderness shoot, they left the world an amazing legacy of images and a photography niche that Galen solely created. Galen’s vision was not to be simply the observer and recorder of wilderness photos. He saw how his participation in a wilderness setting, his interaction with it, his action upon it, added a new element to images of the wildest places on Earth.

Reading about Rowell’s early years, it isn’t surprising, in retrospect, to recognize how he develop this particular photographic vision. It’s also a lesson in the myriad of paths that lead to becoming a successful photographer. For Galen, the wilderness was his first love and photography was 1B to its 1A. Having been born in Oakland, California, and raised in Berkeley, Rowell took many trips to the Sierra Mountains and Yosemite. He was just 16 when he made his first mountain ascent by rope. As he gained more experience climbing and roaming the very wild areas of the High Sierras, he decided to photograph his adventures simply as a way to show family and friends where he went and what he did there.

As Galen Rowell continued to combine his two pursuits, this new concept began to develop in his mind. A vertical rock face thousands of feet tall, a mountain summit or other virtually inaccessible wilderness locations were enhanced photographically when humans were shown interacting with the environment. A different kind of story was revealed when humans acted upon the wilderness, when viewers understood what was required to reach those places and survive there. Rowell had brought the storytelling element of photojournalism into the wilderness.

Galen Rowell’s vision included another twist. His landscape images, without the inclusion of humans, were also powered by his sense of adventure. It was a different way of participating in or partnering with the environment. He began to recognize that his adventure was an art form that could be expressed in landscapes because of the physical and emotional energy that was required to reach those picture-taking positions. Conversely, for the viewer, his landscapes were so powerful that it was possible to lose oneself in them and experience a vicarious adventure.

These dual and complementary visions of how the wilderness can be photographed earned Rowell the Ansel Adams Award during 1984. For the rest of his life, Rowell adventured into the wildest places: the Himalayas, China, Tibet, Alaska, New Zealand, Patagonia and many others. He was a member of major mountain climbing expeditions to the largest peaks in the world: Mount Everest, K2, Mount McKinley and Mount Kilimanjaro.

Rowell preserved his adventures in 17 large-format books. His most popular is probably Mountain Light: In Search of the Dynamic Landscape. Others include Bay Area Wild, North America the Beautiful and Galen Rowell’s Inner Game of Outdoor Photography.

Galen and Barbara Rowell’s legacy is being kept alive in the continued operation of their Web site, mountainlight.com, where many of his images can be viewed and his books purchased. In addition, Mountain Light hosts photography workshops with world-famous landscape and wilderness photographers. For example, Jack Dykinga is leading a workshop, Spring in Death Valley, during Spring 2012, and Grand Teton National Park during Fall 2012. For more information, visit http://www.mountainlight.com/workshops.html.