How To Photography: A Black-and-White Challenge 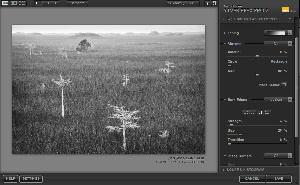 I was in Florida this past January and had a brief opportunity to visit Everglades National Park. The park is well known for its wildlife, but it also has quite interesting landscapes that are not like the landscapes of the West where I live.

I got up early the one morning I had there and arrived before sunrise. Unfortunately, there was a big cloud bank over the east so there was no sunrise. Still, I really liked the landscape and its stark pattern of cypress trees in the saw grass. I shot some images although I wasn’t really crazy about the light and the color. I thought there might be some black-and-white possibilities.

First, I did basic adjustments on the photo in Lightroom, and then opened it to Silver Efex Pro 2.

When I started playing around with the image in Silver Efex Pro 2, I could build up the contrast as much as I wanted, but I was not separating the cypress trees from the saw grass. Yet I really felt that the image depended on helping them break free.

For me, this is not an issue of how to best use software programs. It goes back to traditional black-and-white work as done by folks like Ansel Adams. “What would Ansel do?” is not an unreasonable question. What would he have done with a scene like this?

So that is exactly where I went in Silver Efex Pro 2, to the Color filters! This is such a great feature of the program. It allows you to work with a color image as if you were shooting the original scene with color filters like Ansel Adams had. Except that you don’t have to carry all of those filters with you. Adams had a full range of filters exactly like you see in the Color Filter section of Silver Efex Pro 2: red, orange, yellow, green and blue. And if you aren’t sure how they can work for you, check out Adams’ books, The Camera and The Negative. Everything he says about how filters work applies to how you would use them in Silver Efex Pro 2.

I added a blue filter from Color Filter and instantly the cypress separated from the saw grass.

The cool thing about the Color Filter section of Silver Efex Pro 2 is that you can do more than simply select a filter. By clicking and dragging on the Hue slider, you can change the color of this “filter” in infinite hues, giving what is, in essence, an infinite range of filters. I can imagine that this would have been very exciting for Adams! You then change the effect of the filter by adjusting the Strength slider.

I refined the filter effect by doing some adjustments of contrast and structure in Global Adjustments. I amplified the whites and increased the midtones structure.

I finished off the image with the very traditional image burning technique. This is something that Ansel Adams spent a lot of time talking about in his book, The Print. It is a way of keeping the viewer’s eye in the picture and not allowing them to drift off the edges. I went into Silver Efex Pro 2’s Finishing Adjustments and used Burn Edges for the left and right sides of the photo.

The resulting image is a dramatic interpretation of the Everglades landscape. Silver Efex Pro 2 made it very easy for me to deal with lighting challenges and create a different look of this popular National Park.