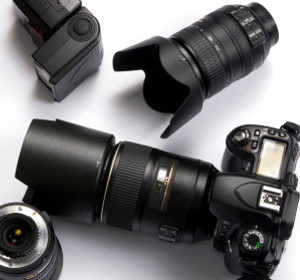 In this article, I want to give you some tips on how to choose the right camera for bird photography. If you are new to bird photography, it may seem hard to pick the right camera, as today there are more digital SLR cameras then ever. You can create bird photographs with every current DSLR but it's worth paying attention to certain features that may give you an advantage in some situations. For example, a camera that can shoot 8 frames per seconds (fps) has a higher change of getting a winner in an action scene than a camera that can only shoot 3 fps. The following tips will help you to pick the right camera for you.

That’s an easy question. Canon or Nikon. Period.
Although the cameras of other manufacturers are not bad, Canon and Nikon offer the best and the most professional cameras (at the time of this writing examples are the Nikon D3s, D3X, D700 and D300s and the Canon the EOS 1D Mark IV, EOS 1Ds Mark III, EOS 5D Mark II and EOS 7D).
In addition Nikon and Canon have the greatest selection of lenses and other useful utilities like extenders.
Canon and Nikon are currently the only companies that offer a 4/500 with image stabilization. Sigma has a 4.5/500, but without stabilization and a slower AF than the Canon and Nikon lenses. And the Sigma is also available for Nikon and Canon, if you want to use that lens (I recommend using the Canon or Nikon 4/500 lenses). Sony recently announced a 4/500 but this is not yet available. The 4/500 is one of the best choices for the serious bird photographer and I use a 4/500 myself for over 90% of my bird pictures.. If you are serious about bird photography and want the best equipment currently available, choose either Nikon or Canon.

The number of megapixels (MP) has dramatically increased during the last years and several models now offer more than 20 MP. Canon's 1Ds Mark III and 5D Mark II offer about 21 MP. Nikon's D3X has even 24.6 MP. I think for most cases 10 or 12 MP are enough, but more pixels allow more cropping without loosing too much quality. The 18 MP of my Canon EOS 7D allows a lot of cropping while still having enough pixels for high quality prints. If you are also doing a lot of landscape photography, you might want to get a camera with more MP to make large prints. Often you will use a different camera for landscape photography than for bird photography. For example, at this moment a combination of the EOS 7D for birds and the EOS 5D Mark II for landscapes is a great and often used combination for Canon photographers.

Let’s use an example to demonstrate the point why I like a camera with a crop factor. Nikon’s D300s and D3s both have about 12 MP of resolution. When shooting with the 4/500 VR lens from Nikon, the 1.5 crop factor of the D300s will give you the bird with the same size in the image as if the picture were taken with the D3s and a 750 mm (500 x 1.5) lens.
That means, when you photograph a bird with a 4/500 with both the D300s and the D3s from the same distance, you will get much more pixels per bird with the D300s than with the D3s. That will allow you to make bigger prints. But keep in mind, that the full frame sensor of the D3s (and D700) has better image quality. You probably won’t notice this at all up to ISO 400 but above ISO 800, the difference becomes noticeable.

What else is important?

The lens is more important than the camera

It's the photographer – not the equipment

Although good equipment is important, a good camera alone won’t take good pictures. If you want to get great bird photographs, you have to learn about the life and behavior of birds and spend a lot of time in the field. This is much more important than your camera!
That said, it pays to invest in good equipment and learn how to use it. Make sure to read the manual of your camera until you are familiar with all it's features. If you don't know how to efficiently handle your camera, you will miss many beautiful photographs!

What do I recommend?

I currently use a Canon EOS 7D (and a 40D as a backup) and am very happy with that camera. If you use Canon, the EOS 7D is a fantastic choice at a very attractive price. If you have more money to spend, think about the EOS 1D Mark IV. That camera has received a lot of praise and is the best DSLR for bird photographers Canon has built so far.
Compared to the 7D, the 1D Mark IV offers an even better AF, a more robust body, 10 frames per second, better high ISO performance, and a lot of other small advantages. That said, the 7D is a fantastic camera and with the money you save compared to the 1D Mark IV, you can already pay half of the price of a EF 4/500L IS. The 7D will also give you more pixels per bird than the 1D Mark IV as it has 18 instead of 16 MP and a smaller sensor (1.6 crop factor compared to 1.3 in the 1D Mark IV).
Many Canon shooters use both cameras and if you can afford it, this will make a fantastic combination for bird photography.
The 1Ds Mark III and the 5D Mark II are better suited for landscape work but will also work well for birds if you don't need the extra pixels a crop factor will give you with distant birds. The 5D Mark II will give you better results at high ISO settings than a 7D due to the larger pixel size of the 5D Mark II. But beside, the slightly better sensor, the 7D is a better camera than the 5D Mark II in almost every way. The AF of the 7D is much better and the 8 fps are much better than the 3.9 fps in the 5D Mark II.
The Canon EOS 50D is also a good camera but the EOS 7D isn't much more expensive and a better camera in every way. I do not recommend using the EOS 50D. Use the EOS 7D instead.

If you shoot with Nikon, I recommend the D300s. It has a great 12 MP sensor, very fast AF, full weather sealing and can shoot up to 8 fps. If you prefer a full frame sensor, go for the D700. The D3s has even better AF than the D300s, a more robust body and an even faster frame rate (9 fps or even 11 without AF tracking). The 1.5 crop sensor of the D300s will give you more pixels per bird than with a 12 MP full frame sensor like the D3s or D700.
The D3X is mostly suited for landscape photographers but the high resolution is great for large prints and allows a lot of cropping. The frame rate is not as high as with the D3s, though. For bird photographers I recommend the D300s or the D3s (or a combination of both if you can afford it).