Overpowering the Sun with the TritonFlash™ 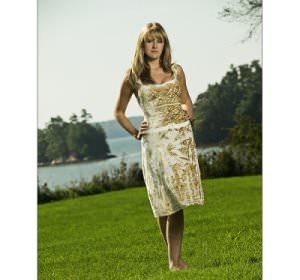 Ever since Photoflex® released the TritonFlash™ battery-powered strobe, photographers from all over the globe have been generating more buzz about its features and benefits than the company has. And with good reason. There's a lot to be enamored with: its highly portable size and weight, its incredibly short flash duration, its functional design and seamless integration with any sized soft box, its long-lasting lithium-ion batteries, the list goes on and on...

But in this lesson, photographer Ben Clay chooses to focus principally on the power output of the TritonFlash™ in an attempt to answer the question: Is it powerful enough to override the light of the sun? We bet you can guess the answer already.

After an early morning shoot alongside a tidal inlet in Freeport, Maine, with my model, Candra, and assistant Cameron, we all traveled a little farther north to a south-facing bluff overlooking the ocean, where I had taken a late-morning wedding portrait of some good friends nine years earlier. [Figure 1]

During that shoot, I made use of the sun as a back light and had an assistant handhold a Medium OctoDome® with a battery powered strobe as a front fill. I remembered that I had to have the power all the way up for it to have an effect. I liked the result I got, but remember wishing I'd had a little more power to at least match the intensity of the sun.

This time around, however, I had the new TritonFlash™ with me and was curious to see if it would fare any better.

When we first got to the bluff, it dawned on me that it was approximately the same time of day that I'd taken the wedding portrait, which was confirmed when I saw where the sun was in the sky. I took a test shot of Candra to see how strong the contrast was and saw that I would indeed need to use some front fill for this session. [Figure 2]

Before adding the lighting gear, I took another exposure with a longer focal length and slightly slower shutter speed to see if that would help bring out detail in the shadow areas. In the result, I saw that the background was a little brighter, but that Candra was still too dark in shadow. [Figure 3]

Pushing the Limits of a Shoe Flash

In addition to seeing how the TritonFlash™ would fare in broad daylight, I also wanted to see how it would compare against a standard shoe mount flash, so first I had Cameron set up a Small OctoDome® with shoe flash attached and mount it to a LiteReach™ so that he could easily handhold the unit. [Figure 4]

With the flash powered all the way up and the OctoDome® as close to Candra as I could get it without entering the frame, I took a few more test shots at the same exposure setting as before. Here's a side-by-side look at the difference. [Figure 5]

There was definitely a difference, but not as much as I wanted. I knew, however, that if I came in tighter on Candra, Cameron could also come in tighter with the light, which would give me a brighter exposure. Without adjusting the camera settings, I took a few more shots, some with the flash firing and some without. [Figures 6 & 7]

Here's another side-by side look at the difference. [Figure 8]

The results were much improved with these last shots, but still I wanted to be able to shoot full length with enough power to light Candra adequately.

While Candra changed into a more summery outfit, Cameron and I set up a Medium OctoDome®, attached it to a TritonFlash™ strobe, and mounted it to a Large LiteStand weighted down with a RockSteady weight bag. It was a little breezy, so we wanted to stabilize the light as much as possible, even though Cameron would be manning it.

In this setup shot, notice how the light from the TritonFlash™ on Candra matches the exposure on her backside from the sun. A good sign! [Figure 9]

For the next series of shots, I wanted to have the sun directly behind her for a more evenly lit rim light, but this meant that the background had to change (unless I wanted to wait for the sun to arc around to its midday position, which I didn't).

So I framed up with some tall pine trees in the background, which would help to accentuate the sun rim light. I had Cameron come in fairly tight with the OctoDome® and when the lighting looked good on some tests shots, I shot another series with Candra giving me a variety of poses. Here's one that stood out from the others. [Figure 10]

The Medium OctoDome® diffused the TritonFlash™ beautifully and I felt that this combination of power and diffusion worked perfectly in this outdoor setting.

Here's a look at the results with and without the TritonFlash™ firing. [Figure 11]

Coming in Tight with Camera and Light

Next, I moved in even tighter for a head shot and had Cameron move the OctoDome® in closer to soften the shadows even more. In the result shot, notice the large catch-lights in Candra's eyes reflecting the face of the 5-foot OctoDome®. [Figure 12 & 13]

The Moment of Truth

With all of the tight and mid-crop shots complete, I returned to my original full-length frame with the water in the background. I had the OctoDome® positioned about 10 feet away and took a series of final shots, all of which came out really well. The exposure on the background was right where I wanted it, as was the light output from the TritonFlash™. [Figure 14]

Oh, but I forgot to mention one thing: The TritonFlash™, which was projecting light through a 5-foot octagonal soft box with two layers of diffusion, was only set to half power!

This meant that at full power, I could have had the OctoDome® positioned even further away from the model, or more importantly, that I could have rendered the background darker than the model if I'd wanted to, thus overpowering the light of the sun! [Figure 15]

Here's a final side-by side look at the difference the TritonFlash™/OctoDome® made. [Figure 16]

My friends in Figure 1 have their 10 year anniversary coming up in September of this year. Perhaps I'll ask them if they want to return to Freeport for another portrait. If they take me up on it, I know exactly what gear I'll be shooting with!