Ansel Adams: A Life in Photography Dedicated to Life 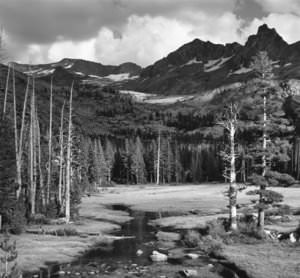 With this article, PhotographyTalk honors the 110thanniversary of the birth of Ansel Adams (Feb. 20, 1902). Few photographers’ names, and their work, are as well known to non-photographers and the world in general as his. Adams’ landscapes of Yosemite, other national parks and the American Southwest have been reproduced in millions of posters, calendars and cards and numerous books. Posters of his images have probably decorated the walls of college dorms and apartments as much as the latest rock god or sports hero.

Maybe what defined Adams more than his photographs and conservation leadership was a fundamental dedication to being as large as life would allow him. Ansel Adams was one of those very rare individuals that demanded much from life; he squeezed as much as he was given to savor, and to share it to the very last drop. Stories are told of his dominating persona that resulted in him being the central figure of the many parties he hosted. Part of this personality trait can be attributed to being an only child, who received all the attention of parents and family. Another part may have likely been that Adams experienced life differently than most, and felt he had a duty to inspire others to learn how to live totally.

One of Ansel Adams’ other qualities that seemed to support his love of life was his abundant energy. He was truly a human dynamo, not only being able to work long hours, but also thoroughly enjoy the experience. He was too dedicated to life to waste time on vacations, holidays or Sunday’s day of rest.

The time he spent at his craft and art also proves that an “Ansel Adams” is only created with a tremendous amount of hard work.

He needed that energy, however, because Adams had to devote much of his time to straightforward commercial photography simply to generate income. As with many people of his artistic temperament, his finances were poorly managed. Many may not realize that Adams had to accept photographic assignments from concessionaires at Yosemite, a small women’s college and even a dried fruit company to make a living. He also did work for major corporations, such as Kodak and AT&T, and magazines: Life, Fortune and Arizona Highways.

Despite the constant burden of financial concerns, Adams was able to direct and focus his energy on learning the theory and practice of photography, to date, and then developing new ideas and techniques. Not only were these evident in his images, but also the photos of innumerable enthusiasts and professionals, including those of today. His 10-volume technical “encyclopedia” remains unmatched.

Three of the 10 still contain information and insights that will teach today’s digital photographers much more of what they need to know about photography.

The Camera is undoubtedly the most important of these, as the first volume in the set. It doesn’t matter if the camera in use is a Kodak No. 1 Box Brownie, which was Adams first as a child, or the latest digital model, the power of Adams’ technical explanations are just as meaningful and applicable.

The Negative, the second volume of Adams technical books, may seem an unusual recommendation for digital photographers; but there is still much on its pages that are relevant. It is also an historical record of how the darkroom was the companion of the film camera. Art could not be created (or even commercial clients satisfied) without darkroom techniques making a contribution equal to what occurred in the camera.

The Print is the other Ansel Adams book that PhotographyTalk recommends, as his methods for making excellent prints still resonate. The computer and Photoshop, Lightroom, etc. may have replaced the darkroom, but every modern photographer should be well versed in how Adams modified a “raw” image to create his celebrated photos.

Ansel Adams at 100 is the commemorative book that was published during November 2003, and is one of the best collections of his works in book form. It showcases 114 of both his well-known photos and images of himself at work and reveling in the amazing life he lived.

AnselAdams.com is the photographer’s official Web site, where the exhibits at his Yosemite Gallery and the exhibitions of his work throughout the world are listed.