How To Photography: Fireworks Are Spectacular, but Don’t Forget your Community’s Fourth of July Parade 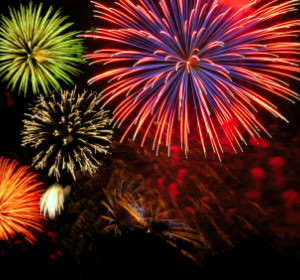 What better day than the Fourth of July presents such a panorama of interesting subject matter for your digital photography? Most communities have a full slate of activities throughout the day, including parades, cookouts, athletic competitions and, of course, fireworks.

It would be easy to consider Fourth of July fireworks as the prime event of the day and deserving of all your photographic attention; however, you may actually capture a much greater diversity of photos during the parade, featuring the patriotism and pride and reactions of people. In fact, managing the photography of a Fourth of July parade and taking pictures of the people participating and observing may advance your digital photography skills much faster than images of fireworks that everyone has seen again and again.

Approaching the challenge of photographing a Fourth of July Parade like a professional is also an excellent learning experience; and the first step is planning. Before considering what kind of camera, lens and other equipment to use, check with the parade organizers and/or the local police or similar authorities. For the best digital photos, you want to obtain permission to walk among the parade participants.

Obtaining such permission and some kind of pass may be difficult as just a private photographer with no media affiliation. Then again, you might find a sympathetic ear that understands you are trying to improve your photography skills, and having access to the parade area will be of great help achieving your goal. If you’re a photographer student, then don’t hesitate to mention your status and that your photos of the parade will help you pass your courses, and even receive extra credit. Above all else, be honest with the authorities on your intentions.

Security is the other very important reason to contact authorities in advance of the parade about your wish to photograph the event. It would not be a good idea suddenly to point a long lens at the parade from the dense crowd or among parade participants. If you plan to use a telephoto lens, then be sure to inform the authorities. You don’t want someone misinterpreting a long lens as a weapon.

Another strategy that may help you acquire full access is to contact your community newspapers and other local media. Tell the editors and/or producers that you plan to photograph both stills and video of the annual parade and you’d be happy to make your images available. Local media may not provide you with a press pass, but you might convince an editor to contact the authorities to help you obtain parade access.

The same strategy may work with parade sponsors, which are typically local businesses. If they are footing part of the cost of the parade, then they may have the clout to inform the authorities that you are taking pictures for use by the sponsors. A business sponsor of the parade should certainly distribute a press release about its support, and that should include one or more photos, especially if the sponsor has a float or sign in the parade.

In terms of the best equipment to photograph a Fourth of July Parade, a DSLR will give you more versatility and control, and might help to impress the authorities, media and sponsors of the seriousness of your effort. If you do obtain permission to walk among the parade participants, then you don’t need much of a telephoto lens because you’ll want to move in close to your subjects. A 24–70mm, 16–105mm or similar focal length lens should be sufficient. Whether you have access to the street or must shoot from the sidewalk, you’ll obviously be on the move, so you don’t want to carry much equipment with you. If you can limit it to your camera, one lens and extra memory cards and batteries in a pocket, then you won’t be encumbered by a camera bag.

Crouch low with a wide angle to photograph majorettes, band members, military personnel, horseback riders, etc. Look for an opportunity to capture the reflection in a shiny band instrument, such as a tuba, of other band members, or maybe an American flag overhead. Turn your attention to the spectators as well, capturing their reactions and interactions from the perspective of the parade. Look for children waving American flags or dressed like Uncle Sam or the Statue of Liberty. You’ll also find an excellent palette of interesting people, poses and facial expression to record.

You’ll learn many more digital photography techniques to improve your pictures during the Fourth of July and any time of the year when you click here.