One of my favorite things about HDR Efex Pro 2 is that the starting point presented by the software is a really natural, good-looking image. With the range of powerful tools available, the image can be tweaked and enhanced to exactly match the effect I’m going for. 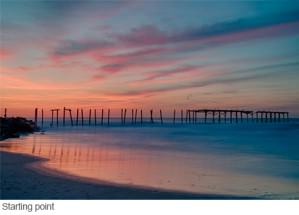 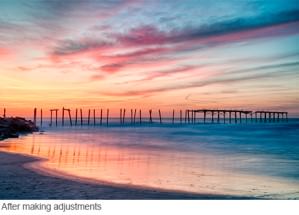 The starting point looks really great, but it could use a little more punch. To accomplish this goal, I did the following:

I then increased contrast by dragging the Contrast slider to the right, which increased the overall dimension of the photo, helping to create that pop that I was looking for.

Adjusting the Blacks and Whites sliders along with the Contrast slider helped to fine-tune the white point and the black point. Increasing the Blacks slider lightened the black point ensuring that there was full detail in the shadows. Moving the Whites slider to the right lightened the Highlights so that we have bright highlights with full detail, and a full range of tonality in the image.

It’s important to check out the histogram while adjusting the Blacks and Whites sliders, especially using the highlight and shadow clipping warnings. Rolling over either of these options will show the pure black (red) or pure white areas (green). You can also click on the option to leave it displayed on your image until you click the option again.