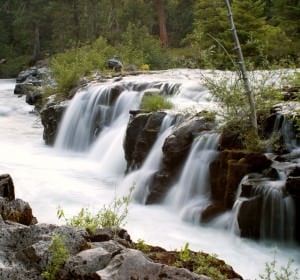 If you’re a landscape, wildlife or nature digital photographer who thinks you must travel great distances and trek into the wild backcountry to find excellent subject matter, then you’ve never been to Cuyahoga Valley National Park. Yes, the same Cuyahoga River that once made Cleveland, Ohio infamous when the river caught fire. Not only has Cleveland re-invented itself, but also it has protected and treasured for many years this often-overlooked natural wonderland situated between it and the city of Akron.

For 22 miles, the Cuyahoga River and its many tributary streams wind through a landscape of steep valley walls topped by deciduous forests and open meadows. All these water sources also create the Beaver Marsh and other wetlands, marshes and swamps, which provide a home for many of the park’s reptiles and amphibians and help filter pollutants from the water. In fact, Cuyahoga Valley National Park’s environment is so diverse that there are habitats for 194 species of birds, 91 aquatic macroinvertebrates, 43 fish, 32 mammals, 22 amphibians and 20 species of reptiles.

With abundant rainfall and snow runoff, the many streams that feed the Cuyahoga create vibrant environments with colorful spring wildflowers and excellent habitats for amphibians, birds and mammals. Select a stretch of a quiet stream and wait patiently for many wildlife digital photography opportunities.

Visit Cuyahoga Valley National Park during early September to capture photos of the migrating Monarch butterflies. They’re attracted to the great expanses of goldenrod and New England aster, as they travel more than 2,000 miles to oyamel forests near Mexico City.

The Cuyahoga Valley National Park is a rare biosphere that includes geographic elements of both the Appalachian Plateau and the Central Lowlands, which have been shaped by multiple glaciations. This has resulted in a rugged landscape, with steep-sided valleys and high, narrow hills. The country hides many ravines through which tributaries of the Cuyahoga River descend as much as 600 feet within just a few miles.

The scouring of glaciers and the work of water created the Ritchie Ledges. Follow the trail along the base of this towering sandstone rock formation to an overlook where you can place your tripod and camera to capture the beautiful sunsets over the valley. Of particular interest for your digital photography is the park’s many waterfalls. Brandywine Falls is the most prominent, with a 65-foot falls.

Cuyahoga Valley National Park is also steeped in much history and historical sites that will render many excellent digital photography images. The Ohio & Erie Canal was the United States first major, man-made transportation infrastructure that was of vital importance for the new nation’s economy. Hike or bike the park’s Ohio & Erie Canal Towpath Trail for beautiful scenes of where the Canal was built across the landscape.

Many historic buildings and homes were carefully located to take advantage of canal traffic and trade. Two brothers built the Boston Store probably during 1836, which now serves as the park’s visitor center. Another building has been located at Lock 38 of the Canal for more than 150 years, and was a tavern, store, residence, boardinghouse and blacksmith shop before becoming the Canal Visitor Center. You’ll also want to train your digital camera on Everett Road Covered Bridge, which is the last in Summit County.

Being located in northeast Ohio, the Cuyahoga Valley National Park is easily accessible from most of the Eastern and Midwestern states and many Canadian provinces. It’s a hidden, natural oasis surprisingly close to urban, industrial and farming areas and a great source of wonderful images for your digital photography.