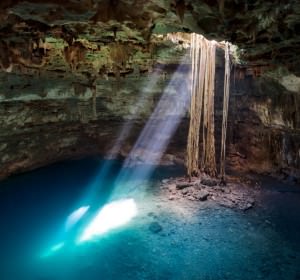 The Yucatán Peninsula of México evokes images for digital photographers of luxurious tropical vacations in Cancun and Cozumel and the spectacular Mayan complexes at Chichén-Itzá and Uxmal, and the less well-known Mayapán.

Not only is Chichén-Itzá a World Heritage Site, but also El Castillo, the dominant pyramid, was named one of the Seven New Wonders of the World during 2007. This has made the complex a very popular tourist attraction, which is why the serious digital photographer will want to visit the site during the early morning hours and sunset. (You also want to avoid the midday heat.) Fewer people and the softness of the light during these time periods will allow you to compose and record photos that reveal the timelessness of Chichén-Itzá. Make sure you and your camera spend time in all three sections of the complex: the Toltec style of the northern section, the earliest buildings in the central area and “Old Chichén” to the south.

Uxmal is also a World Heritage site. It is very easy to understand why it received that designation as soon as you view its magnificent architecture. It shows that the people of Uxmal were great architects and designers, as they created a city of low, broad palaces opening onto grand courtyards. All accented with finely crafted details carved into and from rock. Because the restoration of Uxmal surpasses all other sites, it provides countless images for the digital photographer, who looks to capture not just structures, but also the play of light and air. Again, sunrise and sunset are the best times to photograph Uxmal when its mysterious nature is most likely to be on display.

As a digital photographer eager to bring home the most incredible images of the cities of the Mayan, Mayapán may be a better location. Although it’s within an easy trip from Mérida, it is virtually unknown to the standard crowd of tourists. Except for the calls of tropical birds, Mayapán is quiet, and a true picture-taking adventure for serious photographers.

Surrounding any digital photography destination on the Yucatán Peninsula is one of the most diverse ecosystems in the world. Thousands of species of plants, mammals, reptiles, birds and insects populate the tropical jungles, dry forests and lowland moist forests and the mangroves and Gulf waters of the coastlines.

One of the most amazing examples of the biodiversity of the Yucatán is the Ría Celestún Biosphere Reserve and the annual gathering of 30,000 Greater Flamingos during January in the tidal estuary. Shallow-draft skiffs will take you and your camera among the colonies and rookeries of not only Greater Flamingos, but also many other species of birds. Great flocks of birds soar to and from their nesting sites, affording an endless number of images of birds in flight. Study the birds carefully and you’ll discover details and nuances of their behavior, which are also excellent compositions for your digital photography.

As beautiful and mysterious as the Yucatán is above ground, another world and digital photography challenge lies beneath your feet.

You may not notice it immediately, but you won’t find rivers and lakes dotting the landscape of the Yucatán Peninsula. It sits on an enormous expanse of limestone, and being very porous, virtually all rainwater drains into a grand system of underground rivers, lakes, sinkholes and caverns.

Being accessible, many of these caves became sacred sites for Mayans; some even show archeologically evidence of being occupied by humans for 7,000 years. Thanks to the Mayans, you and your digital camera can explore the magical world that awaits you beneath the Yucatán. Of particular interest are the “cenotes.” A local word that describes places where the limestone ground has collapsed, creating entries into the caverns below. Some are unbelievable grottos and others are filled with water, virtually pure and crystal clear.

South of the village of Tecoh is where a seldom-visited cenote and group of caverns beckon any digital photographer who wants to capture the beauty and majesty of an unspoiled natural treasure. Tzahnah Caves feature stalactites, stalagmites, columns, deep crevices and thirteen cenotes, plus the startling underground chamber known as the Cathedral Cupula.

If you want to photograph the Yucatán as few others have, then you should be one of the 6 photographers to join the Visionary Wild Yucatán Expedition, January 21–29, 2013. Your teachers promise to show you sights virtually unseen and assist you in photographing them with a new level of skill in landscape and nature photography.

Jack Dykinga, acclaimed landscape photographer, and Justin Black, Visionary Wild co-founder and assistant instructor, will focus much of the group’s time on cenotes and the Yucatán’s underworld. Your understanding of the Yucatán ecology will be greatly enhanced with the special guidance of Alfredo Medina, explorer, photographer, diver, printer and president of Amigos de Sian Ka'an, a Yucatan-Peninsula-based conservation organization.

"It was a great trip. Great people, great photographs and a magical part of the universe!" –Sean S., 2012 Yucatan participant