The Need for Short Flash Duration 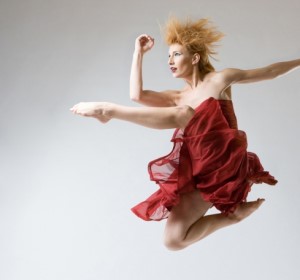 My name is David Hou and I am an advertisement photographer from Toronto, Canada. Some of my most exciting assignments involve photographing dancers and actors for theatre show advertisement. Often, these shoots require setting up a large number of lights, but sometimes very simple lighting setups are effective and get the job done. In either case, the ability to stop motion is usually a key factor for success. So, for a recent commissioned project to shoot a series of dance images for gallery display, I chose to use the Photoflex® TritonFlash® kit—my go-to kit for affordable motion-stopping lighting.

The model chosen for this project, Alayna, is a professional dancer with contemporary, jazz, and classical dance training. My goal in creating this series of images was to showcase movements that combine various dance styles. The use of lightweight and semi-sheer fabric emphasized the movements. One of the biggest challenges in taking a good dance photo is not making the image look posed. The solution here was meticulous lighting design and careful timing of shots.

The Lesson Plan
This project was a good exercise and demonstration in utilizing lighting kits with a very short flash duration. Most photographers, at one point or another, will decide to purchase a studio strobe. This decision is usually because of the need for: increased power or output level, flexibility in light modification, and shorter flash duration. Interesting enough, photographers often rate a strobe unit in the same order. “Bigger is better” is a common mentality and misconception in lighting selection. In reality, the “right” amount of light with a motion-stopping flash duration will often create a more dramatic image. Our eyes are accustomed to seeing blurs; the ability to capture movements in razor sharp “moments” is visually stimulating and refreshing. This project was aimed to look at dance movements from this refreshing perspective.

The Shoot
The shoot took place in my studio, also known as “my playground”. The space is approximately 1200 sq. ft. and roughly divided into 3 areas: 600 sq. ft. of preparation and shooting space, 200 sq. ft. of post production area, and 400 sq. ft. of client sitting area. Upon arrival of the crew, the model was fitted with wardrobes and I took reference shots for the makeup artist. We decided on an 80’s-inspired hairstyle and an avante-garde makeup look that featured the sharp eye shape designs to offset the softness of the fabric. In total, three outfits were chosen for the shoot: a red dress, a black cropped top with long black skirt, and a black dress with colourful tulles.

Setting Up an OctoDome and LiteDome
Each Photoflex TritonFlash was fitted with a different type of modifier: OctoDome and LiteDome.  These light modifiers were extremely simple to set up. As its name suggests, the OctoDome is an eight-sided soft box that requires eight rods, each attached to a corner of the speed-ring by a simple slide-in action. The resulting shape of the OctoDome is nearly circular, providing a very soft and even light distribution. The LiteDome, on the other hand, has 4 rods that attach to the speed-ring to form a rectangular dome. In comparison to the OctoDome, the LiteDome has a more focused light distribution. The quality of both lights is further softened by the use of the inner baffle and outer diffusion materials, attached with built-in Velcro.

The Lighting Combination
For this shoot, I used three Photoflex TritonFlash strobe heads on two Lithium-Ion packs. Two of the strobe heads were fitted with medium OctoDome soft boxes and connected to one pack to form the rim lights from behind the model. The other pack and head was fitted with a medium LiteDome and placed on a boomed stand on top of and slightly in front of model.

With two of the outfits, namely the red dress and the black cropped top with black skirt, all three lights were used. For the black outfit, the top light to rim light ratio was 2:1. This ratio was reversed for the red outfit. I selected these ratios because of the difference in fabric quality between the two outfits. The black outfit was essentially opaque. So, I wanted the lighting to be practically top down, creating interesting contrast between highlights and shadows. The look was only softened with the help of the rim lights. By contrast, the red outfit was made of a shiny but slightly translucent fabric. With excessive top and frontal lighting, this fabric would look heavy and plastic-like. Using more powerful rim-lights and filling in with the top light, I was able to capture the lightness of the fabric. Lastly, with the black dress and tulles, I used the rim lights exclusively and chose a camera exposure that underexposed the front of the model by one f/stop. Tulles are very light and suspends in the air very well. Using only the rim lights, the texture and lightness of the tulles were captured.

In each of setups, different moments were also chosen for the final images. With the red dress, peak moments were captured. This is typically the choice moment when photographing dance. However, with the other two outfits, I was feeling more experimental. I wanted to focus on transitional moments. Looking back at the history of dance photography, there are many beautiful images of dramatic peak moments where motion seems to have stopped and indeed do stop for fraction of a second in reality. However, very few pictures capture the imagination of what came before and what comes after the moments. Therefore, with these two other sets of photos, I wanted to show a movement in progress, letting the mind’s eye fill in the moments immediately before and after. With the help of the short flash duration of Photoflex TritonFlash lighting, it was possible to freeze these moments, which never did stop in real life. The results had a surreal quality to them.

Importing into Adobe Lightroom and Editing with Adobe Photoshop
Upon completing each segment/garment, images were downloaded into the laptop computer via Adobe Lightroom with a preset that I had previously calibrated with a gray card for the camera (Canon 1Ds Mark III) and lighting (Photoflex TritonFlash ) combination. Minor exposure adjustments were made in Adobe Lightroom to darken or brighten the images. The selected images for the gallery prints were processed into 16-bits tiff files for further editing in Adobe Photoshop.

The amount of editing in Adobe Photoshop was kept to a minimum. I was trained the “old fashioned way”, before Adobe Photoshop, when only limited darkroom post-production was possible. Rather than rely on excessive post-production, I try to create the final image in camera. For these images, I used Photoshop to crop and adjust exposure, colour balance, and contrast. Blemishes were edited with clone stamps and healing brushes. Some dodging and burning layers were applied. A softening action was also applied to the skin to enhance the makeup arist’s work. This approach demanded absolute precision in lighting design. The ratio chosen between the top light and rim lights had to be exact to create the effect I wanted.

Final Results
Here are some images edited for the gallery display. The gallery prints are being exhibited this year (2012) at the Toronto Botanical Garden as part of a dance event featuring a visiting dance company from Philadelphia, USA.

Summary
When considering the purchase of strobe units, it is important not to overlook the importance of a short flash duration. Power output is important to cover large areas and getting a large depth of field. The ability to use a variety of modifiers allows photographers to shape the lighting exactly as needed. However, these two elements on their own are not enough to create these motion-stopping and heart-stopping images that are so visually exciting. Don’t sell yourself short; make short flash duration one of your key considerations when purchasing a strobe. Most of these units are very pricey in the current market. However, with the introduction of the Photoflex TritonFlash, photographers now have an affordable option.