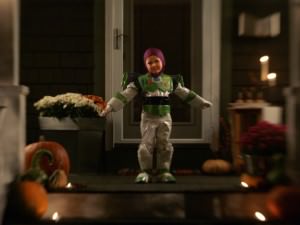 A few years ago, I shot this Halloween portrait of my son, Aidan, in his Buzz Lightyear costume on our front porch.  In keeping with the dark theme, I decided to wait until dusk before shooting.  Shooting at dusk can be tricky, especially if you're going for a dark look, but additional lighting can give you more flexibility with the look and feel of your shot.

Using Props to Set the Stage
Props are paramount to theme portraits like these, and a little preparation beforehand can go a long way toward making the shots contextually successful. Here, my wife, Tamara bought a few different types of pumpkins, some potted flowers, a bunch of candles, some caramel apples, and candies. [Figure 1]

With Aidan in costume, I first used a small point-and-shoot digital camera (in AUTO mode) to take a quick snapshot of him, the way most parents would. [Figure 2]

This type of shooting yields commonplace, deer-in-the-headlights results, particularly with the built-in flash overpowering the mood of the scene.  Although there are candles lit all around, there is no evidence of their moody ambiance in this shot.  The flash helps to document the scene and freeze any motion, but that's about it.

A Fine Line between ISO and Shutter Speed
Next, I swapped out the point-and-shoot with a DSLR with a telephoto lens and no built-in flash activated, and set it up across the street.

Even at the widest aperture setting, I knew I would still need a slower shutter speed to adequately capture the candlelight and porch lights.  I also knew that if the shutter speed was too slow, that I would also be risking motion blur if Aidan happened to move.  As a compromise, I increased the ISO setting, as well as the shutter speed, and took a shot. [Figure 3]

The result shows a decent capture of the candlelit scene without motion blur.  However, Aidan is nevertheless dimly lit and the noise generated from the high ISO is fairly evident in the darker areas, particularly at a 1:1 viewing ratio.  [Note that this lesson was shot a few years ago, when DSLRs weren't able to maintain image integrity at high ISO settings.]

Creating Background/Rim Lights
To brighten up the scene a little, I added two Photoflex First Studio Portrait lights on either side of the porch.  These tungsten lights are simple and easy to work with because they are continuous (no flash), they're easy to set up, and they plug straight into an outlet. [Figure 4]

Once I had the lights were set up and aimed toward Aidan, I saw that I had a lot more light than I did before.  This allowed me to lower the ISO setting and keep the shutter speed and aperture settings where they were.

Once I had the camera settings dialed in, I asked Aidan to give me some poses, as though he were Buzz Lightyear.  This ended up being our favorite of the bunch. [Figure 5]

Adding a Hard Light
While the two lights on the porch created a dramatic rim light for my little subject, I thought it would look good to add another First Studio light to illuminate his face a little more.  Rather than attach the umbrella to this third light, I just used the open head for a more dramatic, high contrast effect. [Figure 6]

While my action hero sampled a Halloween lollipop, I took another shot at the same camera settings. [Figure 7]

While this light helped to throw high-contrast light on Aidan and the front of the porch, I thought the effect was a little too heavy-handed.  The light seemed a little too bright and the shadows cast from the porch railing and bushes were a little too distracting.

Creating the Dappled Lighting Look
Fortunately, there happened to be a rose bush just behind the light, so I decided to take advantage of this natural light modifier and position the light a few feet behind it.  This positioning would help to create a dappled lighting effect. [Figure 8]

I also wanted to add a little more mood to the shot by minimizing the depth of field.  Since the background and foreground were both in close proximity to my subject, this was difficult to achieve with the telephoto lens I was using, even at its widest aperture setting.  So instead, I substituted the telephoto lens for a Lensbaby lens, which allows for selective focus with its adjustable bellows. [Figure 9]

I had Aidan take a break from posing while I switched out the lenses, repositioned the camera, and dialed in the focus and exposure settings of the shot.  Once everything was set, I took two exposures at different White Balance settings.  Notice the effect the dappled light has on the shot.  The light coming through the rose bush is much less intense than it was before and does not overpower the other lights, including the candlelight.  Also, notice the blurred effect of the limited depth of field, especially with the candles in the foreground. You can see how the Tungsten White Balance setting in the camera makes for a more neutral result. [Figure 10]

Once everything was set, I had Aidan come back onto the porch and give me a bunch of Buzz Lightyear poses. Here's one from that series. [Figure 11]

Fine-Tuning the Shot
The result was interesting, but I noticed that the dappled light was not reaching Aidan as much as I wanted it to. I also decided to come in a little tighter to better make out his expression. When I came in tighter with the camera, I had to switch from a vertical crop to a horizontal crop in order to keep the Halloween props in the shot.

After repositioning the dapple light and reframing the shot, I took my final shots. Here's my favorite of the bunch. [Figure 12]

As you can see from the progression of shots in this lesson, coming up with a good themed portrait can take some experimentation.  But once you've got a handle on how to create and modify light, as well as how to make custom camera settings, your results will invariably rise above those of the point-and-shoot crowd.

Have fun this Halloween!

Written and photographed by Ben Clay, contributing instructor for PhotoflexLightingSchool.com