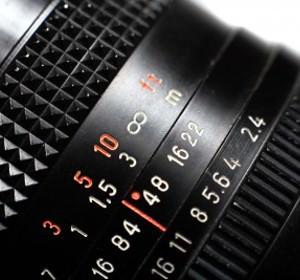 Part 1 of this five-part series of articles started to give digital photographers the knowledge to tame the three-headed exposure monster: ISO, shutter speed and aperture. Part 2 explains shutter speed. Part 3 focuses on the third head, aperture. Many photo experts will tell you that learning how to control aperture is what separates the digital photographers who don’t seem to know (or care) what they are doing with a camera from those who want to advance to a higher level of accomplishment.

Aperture is a number that represents the size of your camera lens opening. That number is called an f-stop; “f” is for focal. Those numbers are found on the lens of your digital camera, and may appear as f/2.8, f/4, f/5.6, f/8, f/16, f/22, etc. What can be confusing about f-stops is that the smaller the number, the bigger the aperture opening. If f/2.8 is the smallest number on your lens, then that setting allows the most light to enter the camera. An f/22 opening is very small, so the least amount of light strikes the camera’s sensor.

Another bit of confusion is that, like shutter speed, each f-stops represents a doubling or halving of the amount, although the numbers are not twice as much or half as much as the previous number. For example, f/8 is an aperture setting that is only one-half the opening of f/5.6, or f/5.6 opens the lens twice as much as f/8. Remember, the shutter speed settings are also double or half of the next number in sequence: 1/500th is double the speed of 1/250th, or 1/250th is half the speed of 1/500th.

This is where the three-headed monster often bites digital photographers because there is a direct relationship between the aperture and shutter speed settings, since both follow the doubling or halving concept. This means that you can cause the same amount of light to enter your camera at more than one combination of aperture and shutter speed settings.

Part 4 of this article reveals the direct correlation between aperture and depth of field to help you improve your digital photography.