How To Photography - There’s More Pictures to Take During Twilight, Part 1 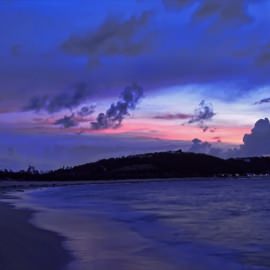 Sunset is one of the most common digital photography subjects, or scenes. At some primal level, humans are drawn to the sea, and especially when the sun is low in the sky at the end of the day. It’s a more natural celebration of day’s end than the somewhat arbitrary time on a clock.

Plus, of course, sunsets are often spectacular, bathing the total environment—sky, sea, beach, rocky shoreline, mountains, forests and cities—in a special light that is breathtaking as well as calming. Unfortunately, too many sunset pictures look exactly the same because photographers, typically amateurs, are more interested in capturing something, instead of taking the time to find and take unique digital photos that will truly dazzle their family and friends.

Maybe, the biggest mistake that amateur photographers make is to think that the only pictures to shoot at sunset are those when the sun is still visible. Even experienced portrait photographers tend to want some of the sun in the sky. Too often, these, and many other types of photographers, are ready to call it quits as soon as the sun disappears. If they spent a bit more time developing their photographer’s eye, then they would learn that there is still light, even though they can’t see the sun. That period is called twilight, and is considered “magic time” by photographers in the know. This two-part PhotographyTalk.com article will reveal that there are various kinds of twilight and how to take exciting digital photos during each kind.

To be more specific, twilight is the short interval of time between when the sun is still in the sky and a completely dark night. The sun may be below the horizon, but its light rays are striking the curve of the earth like a tangent line touching a circle (if you recall your geometry). Instead of the sunlight of noon entering the atmosphere from directly above, the evening’s light must travel through the blanket of the atmosphere from a low angle. This causes more refracting and scattering of light rays and softens them. Not only is twilight a totally different environment of light, but also there are three distinct stages of twilight; and each provides different opportunities for your digital photography.

Early twilight is approximately the first 30 minutes after a complete sunset. Your location and the season determine early twilight’s exact length. As you would expect, there is more light during this period, so most objects are well lit, requiring no flash assist. You’ll still be able to see the horizon as well as some of the brightest stars and highly reflective planets, such as Venus. There will be enough light to take digital photos handholding your camera.

You’ll notice that the colors in the sky undergo a somewhat rapid transformation from those associated with sunset to an entirely different palette. As the remaining light waves travel from below the horizon, you may see your scene illuminated in soft, golden hues and traces of pink across the sky. The temperature of the colors will start to shift from the hot, or orange/red, end of the spectrum to the cooler, blue end.

As early twilight transitions to middle twilight, the entire sky will appear very even from its lightest to darkest areas; however, that will also cause the range of light in your digital photos to become limited.

Read Digital Photography - There’s More Pictures to Take During Twilight, Part 2 to learn about the other two phases of twilight. (coming soon)