Photography Tip - Take a Hike in the Dark

The thing I like most about night photography is that the photographs very often look nothing like what our eyes see. This is particularly true with images that record moving lights. The long exposures required to shoot at night blur these lights into abstract streaks. I like to call this "Streaking Photography." Any type of light works; if it sends out photons and it moves, it's a candidate. Among typical subjects are the lights from moving vehicles, carnival rides, and star trails. But hey, in my dictionary, typical is a dreadful word. I don't want my photos to look like everyone else's. Do you? 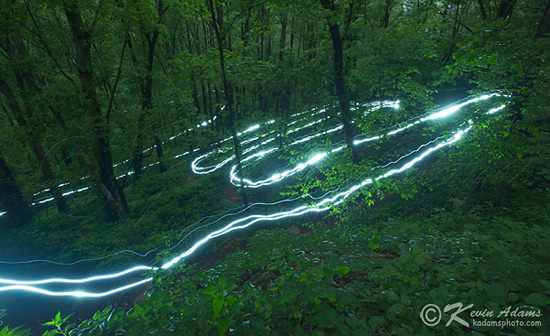 Let's come up with something different for our light streaks. Rather than shooting the same subjects everyone else does and being forced to record locations and movements that are already set, let's create our own light streaks and photograph them wherever we want. Taking pictures like this might seem intimidating, but I promise it's easier than you think.

The first time I hiked the switchbacks in the accompanying photos, I knew I'd be coming back and photographing them in some capacity. You probably know that diagonals and S-curves make strong compositional elements in a scene. Well, what better location to set up a streaking photo than a quarter-mile stretch of sharp switchbacks down a steep mountainside? Here's the really important part, so pay close attention. For both of these shots, I previsualized the photo long before I shot them. I knew what they were going to look like before I even got on location. This may sound conflicting with what I said in the opening statement, but it's not. The key to most types of night photography is being able to previsualize the scene beforehand so you can be in the right place at the right time with the right equipment and make the right camera settings. It's a matter of trial-and-error experience. In other words, get out there, take a lot of pictures, and see how the long exposures affect the various light sources so you can plan your shots. 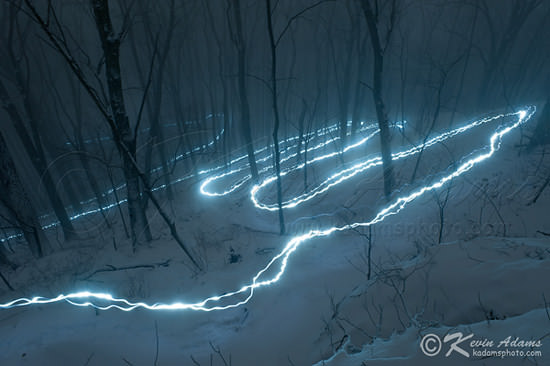 Okay, back to the switchbacks. For the winter scene, I set up the camera on a tripod in daylight so I could see to compose and focus. Then I left the camera set up and walked back to the trailhead, which was close by, and waited in the truck for two hours until it was completely dark. Back at the camera, I set the ISO to 200, aperture to f/11 and the shutter to bulb. Then I locked down the cable release and took a hike. As I walked along the trail, I kept my head pointing straight ahead so the headlamp would illuminate the trail. I also carried a flashlight and kept it pointed toward the camera as much as possible.

It took 20 minutes to hike to the end and back. Yes, the winter shot is a single 20-minute exposure! Didn't know you could shoot long exposures with digital? In certain circumstances, you can. On this night, the temperature was in the low 20s, which meant noise wasn't a big issue. (The warmer the temps, the more noise you get. Shoot a 20-minute exposure when its 80 degrees and you'll get nothing BUT noise.) Also, the low ISO of 200 helped a lot.

The summer shot is a different proposition entire, as Gomer Pile would say. No way could I shoot a 20-minute exposure without getting excessive noise. Also, I knew that the summer forest would absorb much of the light from the flashlights. The winter scene benefits from the snow acting as giant reflector, scattering light all over the scene. In the summer, none of this was going to work. The solution? Shoot two separate exposures and blend them together in Photoshop. I set up the camera just as in the winter, while it was light enough to compose and focus. Then right at dusk I shot an exposure for the forest. A few hours later, I came back and shot the 20-minute exposure for the light painting.

But wait, if I shot a 20-minute exposure for the light painting, why isn't the image noisy? The answer is because noise generally only shows up in the dark areas of an image. With bright lights such as this, a 20-minute exposure at ISO 200 shows almost no noise in the lights. The key is to make sure that only the lightest part of the light painting shows up in the resulting photo. This is a simple matter of getting the order right when you stack the photos in Photoshop. With both photos open, hold down the Shift key and use the Move tool to load the forest shot on top of the light painting shot. (By holding the shift key, both layers will align precisely, assuming both were shot with the same composition from a tripod.) Set the blend mode to Lighten and voila, there's your photo! Just make sure that the light painting frame is UNDER the forest shot when you stack them, and all is well.

See, that was pretty simple, wasn't it? Here's the challenge. Come up with your own streaking scenes. Like to ride bikes? Attach some lights to the bike and ride around in a dark neighborhood. How about attaching lights to a kayak or canoe and paddling across the water? Hang a light around your dog's neck and throw him a stick. Put one on your cat and record her chasing the dot from light pointer across the house. In other words, use your imagination! And remember, typical is a really bad word.

All My Best,
Kevin Adams
Instructor/PPSOP.com