How to Photography - There’s More Pictures to Take During Twilight, Part 2 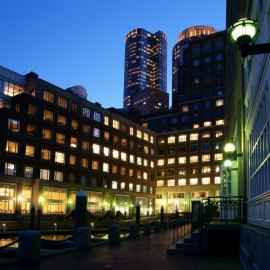 With a bit of knowledge from Part 1 and Part 2 of this PhotographyTalk.com article and some practice, you may discover that some of your best digital photos will be taken during twilight, after the sun can no longer be seen. Part 2 explains the light conditions during middle and late twilight and how to take pictures as the sunlight disappears completely.

Middle twilight is the next 30 minutes of the evening. Naturally, the sun is farther below the horizon line (because the Earth has turned farther from the sun). Again, the time of the year and your latitude position will affect middle twilight’s exact time period, the amount of light and the color of the sky. It will be a deep blue, with the first hints of total black, but the power of the sun’s rays will still produce some splashes of orange and yellow. The light and color are now much cooler.

You should still be able to distinguish the horizon, but you’ll probably need a tripod, as the light is too weak to take handheld digital photos. There’s likely to be very little detail on the front of objects, since there will be no light source from over your shoulder to reflect off those objects. In fact, most objects will quickly become silhouettes only.

Middle twilight is when the first artificial light sources become significant, such as those on buildings and signs. During this even shorter period, you may notice that those artificial light sources have created an interesting balance with the remaining sunlight. Your subject or object may reflect some of the light from the artificial sources, and is just backlit enough by the light spilling over the horizon to produce more depth and definition in your digital photos. A flash assist during middle twilight will reflect even more light off your subject, but not ruin the effect of the softly lit horizon line in the distance.

Late twilight is the final 30-minute period of the evening. The Earth has turned 12 to 18 degrees from a line defined by the center point of the sun. What remains of the dark blue sky of middle twilight is quickly becoming totally black as night. If you want pictures of this scene, then you will definitely need a tripod. You could try a long exposure with the available light of your family or friends around a campfire on the beach, for example. You’re apt to capture an interesting image, with the flames, and even people, blurred from their movement. Then, use your flash, so you can take handheld shots of all the fun.

Late twilight is a good time to position your camera on a tripod at a strategic location to photograph a fully illuminated city skyline. There’s just enough light left in the sky to outline each building, as each casts plenty of light from windows, towers and signs toward your camera. Look for a location in the city, in an open square or park. Frame a scene with a prominent building in the background with a bit of light behind and a splash of stars (or maybe the Moon) above it.

Remember, to scout your locations well in advance of the evening you want to shoot. It’s also a good idea to know the exact times of sunset, moonrise and moonset and the three periods of twilight. Some smart phones have an app that provides that information.