Okay, okay, yes, I know that Bryan Petersen wrote the book Understanding Exposure which teaches you how to make great exposure for great photographs. But sometimes, what's "correct" isn't always the most effective for the point and feeling of the photograph. Purposely (or even accidentally) overexposing the image by one or two stops can create a very ethereal mood. With the right subject and setting, the results can be breathtaking. Oh, and don't worry about Bryan...we are a tight family here at PPSOP!  :)

A couple of years ago, when we still shot slide film, one of the participant in my lighting workshop made a very common mistake that we all make one time or another. She very carefully set up the lights for a high key situation: white background, lovely young woman wearing a white veil and lots of broad soft light. She then painstakingly took the exposure readings, making sure that the background was one stop more light than the main light and then promptly forgot to set the aperture on her camera! When the film came back the next day and she saw the mistake she made, she was devastated, until I made her sit down and look at all the film. The result was with the overexposure, the skin tones were barely there and everything was flared, so the subject looked like an angel! One of the images was so spectacular that we chose it to be the lead image in the class presentation. Many of you in my classes have heard me talk about talking risks and that failing is a really good thing, and this is the perfect example. 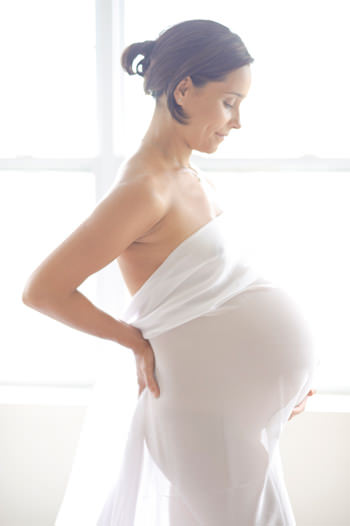 This first image of the pregnant woman was done totally with window light coming from behind her. When I went to her house I had several ideas in mind and my SUV was loaded with strobe lights, a couple of backgrounds, white and pink chiffon, black velvet, and tons of gear. When I saw her two-story high living room with the windows and white walls, I never touched anything but my camera for the entire shoot. The sun was shining brightly outside, not directly in the window, but the light inside was very soft and bounced all around. I set her up with the window behind her and purposely overexposed by about 2 full stops. That does a couple of things: makes all the tones very light and pastel and also makes the highlights "flare" so that the edges are all soft and nothing is really sharp. I shot the entire afternoon doing the same thing and achieved an incredible array of images. The reason the exposure causes the flare is that it's just like looking directly at a light source. The difference in the amount of light falling on her skin and the light that was outside had to be over 7 stops, so that turns the outside into a giant light.

The next image was totally by mistake. The lovely red haired girl was just so darn cute that I grabbed my camera and shot without even looking at the meter. By the way, I shoot mainly on Manual Exposure, so I always control the exposure. I took a quick look at the LCD and adjusted my settings, then continued the shoot with the correct exposure. But there was something about the pureness of her that made me really like this overexposed image. I did have to use the Recovery slider in Camera RAW so that I could pull in some detail on her face, or it just would have been eyes and a slash of mouth. But I like the washed out skin and the fluffiness of her hair. The light is bounced around tan walls and she is under an overhang (porch lighting) so no light is coming from above her. 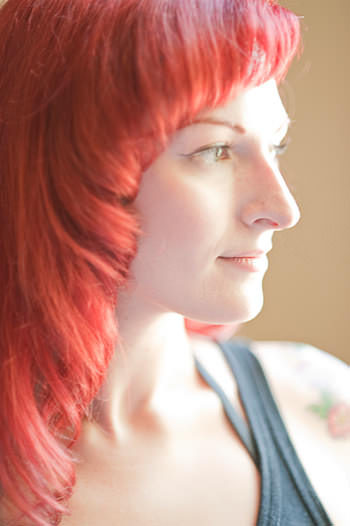 The young woman with the fluorescent red hair is overexposed by about one stop. She has very rich color in her hair, and she was used to wild and saturated photos, especially with her tattoos. But the truth is she is very sweet and kind and I thought that giving her pastel colors was a nice change. This is just window light and no reflector. 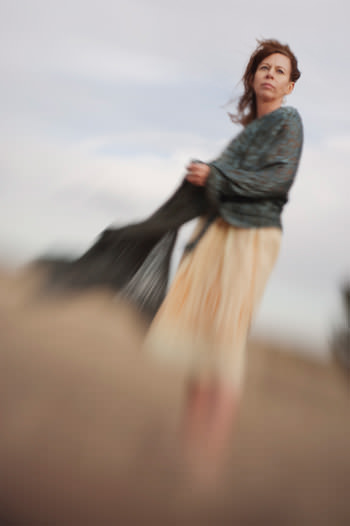 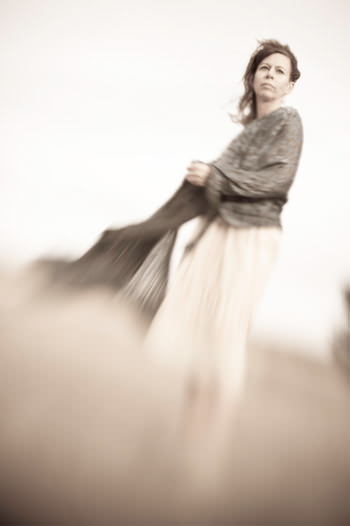 This last image was shot with a Lensbaby on an overcast and slightly windy day. In Lightroom I used the Creative Aged Photo filter preset so the colors are desaturated. Then I lightened the exposure to +1 to wash it out even more. So this was a creative choice. The model looked like a prairie woman from the 1800's and I wanted to capture that kind of old fashioned look, but for a strong spirited woman. You can see in the original how the richness of the color, even though still not brilliant colors, doesn't quite capture the same feeling.

So the best thing to do is experiment! Take those risks, make the mistakes, try overexposing one or two or three stops and see what comes out of it. You never know what kind of creative spark can happen that could also provide you with inspiration and ideas for the future. Have fun!


All My Best,
Bobbi Lane
Instructor/PPSOP.com

"The Perfect Picture School of Photography"