How to Photography: Shooting Video for Beginners 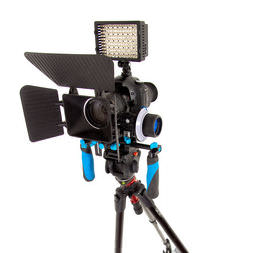 Most digital photographers, even those with the most inexpensive digital cameras, take it for granted that their cameras are capable of recording video and an accompanying soundtrack. Lest you forget, this capability has only been available on digital cameras since 2008, when Canon was the first to include video on the EOS 5D Mark II DSLR. Within this relatively short period of time, essentially all DSLR (with a few exceptions), mirrorless cameras and many compact models have progressed from recording 720p video to 1080p Full-HD video, and in many cases, at various resolutions and speeds.

For casual photographers and hobbyists and enthusiasts, video recording has been generally considered secondary to shooting still images until advancements in technology made it easy to share videos either via the Internet and social media or by connecting a camera directly to a HDTV. Now, many people with a digital camera shoot as much video as stills because it provides the addition of motion and sound to record events in one’s life and share them with essentially anyone.

Initially, serious amateurs and semi-pro and professional photographers showed little interest in the video capabilities on their intermediate or high-end DSLRs because many (if not most) had come from a still photography background. They viewed video as a nice function for casual photographers, but it wasn’t a service that professionals’ clients requested. At a professional level, wedding photographers were probably the first who realized they could offer both still and video services, instead of seeing some of their clients’ money going to a separate videographer.

Now, professional photographers have a new understanding of the commercial and creative opportunities that video provide. Some cameras are now capable of broadcast quality video, so more photographers can broaden their client services, become documentary videographers and even venture into motion picture production.

Even if you’re not a professional photographer, video offers you an equally exciting creative palette, especially if you apply what you’ve learned with still photos and the special features of video. The following tips will help you become a well-rounded visual creator.

It’s still about telling a story

Telling a story in a single image challenges many beginner photographers; however, video may be an opportunity to understand, practice and excel at this technique, whether the story you want to tell is a family event or a documentary of your travels. The principle is the same: Find and capture the visual elements that first attract viewers and then guide them through the message you want to communicate.

Some of the exposure and shooting settings for video are identical or similar to shooting stills and some are specific to motion photography.

Aperture remains essential the same as still photography; however, today’s fast lenses allow you to select wide apertures, so you can utilize a shallow depth of field for more creativity.

The use of ISO doesn’t change, being set to the value that aperture and shutter speed dictates.

When selecting a shutter speed for video, forget about 1/30th or slower; instead, calculate an exposure formula with 1/50th as optimum.

It may be common to rely on auto white balance when shooting still photos; however, with video, you want to know how to adjust it manually, and then check it between each video sequence, so white balance is consistent.

Frame rate is a shooting setting that is exclusive to video and different than the shutter speed. To emulate the look of film-based movies, you should select 24 frames per second, which matches well with a 1/50th shutter speed.

Although it’s a good idea to have in mind the kind of images you want to capture before shooting still photos, pre-production planning is even more important for good, efficient video creativity. You may not have to develop a detailed storyboard of your video sequences as a professional would, but the storytelling quality of your final production will benefit greatly from some prior planning. You want a clear understanding of the beginning, middle and end of your story, and then shoot more than one video sequence for each part of your story from various angles, positions and distances from your subject, etc.

The addition of sound

Video is not just visual, but also auditory; so part of your planning should include some consideration of what kind of soundtrack is appropriate for your video. With a nature shoot, you certainly want to capture ambient sound of animals, wind and weather, for instance. The same goes for a video story of your child’s sports team game. You want to record the sounds that match the action. You may also want sequences without ambient sound and use music only to help emphasize drama and/or emotion. Depending on the complexity of your production, you may need a better microphone than what comes on your camera and an external audio recorder too. Fortunately, these can be rented at affordable rates.

Although editing, or post-production, is an essential stage of still photography, it is even more critical to the final look of your video. If you’ve planned carefully and shot a sufficient number of video clips and recorded the right audio, and correctly, then much of the creativity of a video production occurs in the editing process.

Although you may shoot video with the same camera as still images, it can be a rather different creative and production process, as the tips above suggest. You will find it very useful to attend a video production workshop or complete an online course that will teach you the specific techniques to help you become as accomplished as a videographer as you are a successful photographer.