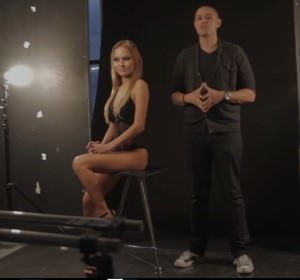 Why Continuous Lights?
Continuous lights can often be dismissed as outdated equipment in the photographic world, but only to those who are unfamiliar with what they're capable of, particularly with today's modern DSLR's, which can shoot both stills and video and which can shoot at exceedingly high ISO settings without compromise to the image.

But one of the best things about continuous lights is that they are easy to master. The effects of this light source can be seen "real time", which makes it fundamentally easier and faster to adjust if need be. It makes it easier for those who are just learning how to create and control light and does not require reading an entire how-to book on flash photography. Now that HD video is possibe in DSLR's, shooting high quality video is easier now than ever before.

Personally, I'd rather not carry two lighting setups for on location shoots if I'm planning on shooting stills and video. It's just not feasible. Lugging around with a trunk full of equipment? It's just not happening!

Enter the Photoflex Starlite QL's. They're lightweight, they're indestructible and they're compact! My video/stills kit includes three Photoflex Starlite QLs. I can shoot both still photos and video with them. But the best part is, because they are constant, there is minimal adjustment out of camera, which saves me a LOT of editing time.

Regardless of whether I'm shooting a fashion shoot or a fashion video, I have two main lighting setups that I rely on: a two and a three light setup. Keep in mind that for this shoot, the photos and videos were converted to black and white so as to easily demonstrate these techniques. Aside from that, the images of my model, Stefaniya, were not edited in any way.

The Two Light Setup
My two light setup for this shoot was pretty simple. I had two open bulbs behind Stefaniya to create separation from the background. If I'm leaving the bulbs open, which I generally do to create flare and/or a backlit feel, I'll keep the lights from spilling onto the background by placing a flag on either side. This keeps the background dark, but creates great highlights along your subject, as it did here. [Figures 1 and 2]

If you're looking to create a mysterious or sexy mood for your portrait or video, I highly recommend this two light setup. It adds drama by creating shadows on the face but it also illuminates the cheek bones, jawline and outline of the body. Here, you can see a still clip from the video that shows what the two light setup looked like on Stefaniya. [Figure 3]

The lights were positioned at the same height of Stefaniya and angled approximately 45 degrees back.

The Three Light Setup
By simply adding a key light, you can radically affect the mood of a photo or video. In this setup, adding a Medium SilverDome just above my model helped me carve out Stefaniya's cheek bones and jawline through shadow placement. The mood was changed just by introducing one more light. Small movements by Stefaniya, even the slightest tilt of her head, revealed drastic differences in her features. [Figures 4, 5 and 6]

The main light was set 45 degrees to the left, two feet above Stefaniya, and angled approximately 45 degrees down.

Keep in mind that these two setups have many variations. You can adjust the height of the lights, the distance to sunbelt and the angles. Practice and experimentation are the keys to mastering the two lighting techniques!

Written and shot by Jeff Rojas.
To see more of Jeff's work, check out his Pro Showcase page.