It Could Happen to You: Maryland Photographer Robbed During the Christmas Holidays 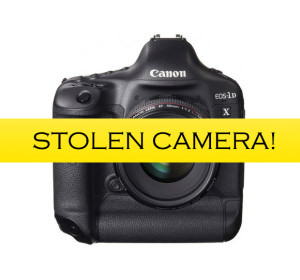 Although the incident rate of burglary in the United States has declined since the 1970s, data from the FBI and National Burglar & Fire Alarm Association revealed that during 2012, 1 in 6 homes was burglarized, a burglary occurred every 15 seconds and the average loss per burglary in the U.S. was $1,675.

This was no consolation to Wendy Hickok, an Annapolis, Maryland professional photographer whose home was burglarized during Christmas Eve or Christmas Day 2012 of approximately $21,000 of photography equipment. Ms. Hickok made the mistake of many photographers. To save a few dollars on her annual business insurance premium, she elected not to insure all of her photography-related gear. Don’t make her mistake. Her cameras and lenses were insured, but not other gear, such as camera bags and memory cards. In addition to whatever deductible she has to pay to repurchase the items covered, she estimates she will have to spend a minimum of $3,000 to replace the equipment that wasn’t insured. Deductibles range from $250 to $2,500 per loss, depending on the insurance carrier. Photography-oriented insurance policies can cover related equipment, such as tripods, bags and memory cards, if a qualified insurance advisor includes these items.

Homeowners’ policies will assuredly not pay for a $21,000 equipment claim when the occupant is a business—even a small one.

Although news reports don’t indicate where Ms. Hickok stored or left her equipment, it’s likely it wasn’t well secured because the average burglar tries to spend no more than 12 minutes inside a home. In addition, most burglars head immediately to the master bedroom where they expect to find jewelry, collectibles and a safe or “hidden” cash. If Ms. Hickok had a dedicated room next to or near her master bedroom that she used as an office (which is often the case), then the burglar would have likely made it his second choice. If her equipment were visible, then the burglar would have certainly been attracted to it. Plus, if it was easy to determine that she was a professional, then the burglary would have realized immediately that she had equipment that was worth much more than one would expect to find in the average home.

Many burglary victims think that professional criminals perpetrate most burglaries, but statistics reveal that the typical burglar is an “amateur,” male of a young age, mid to late teens, and lives within a few miles of their targets. If it was readily known in her neighborhood that she was a professional photographer, then it may have been easy for the burglar to determine that her home was worth the effort. He may have already been familiar with her home, seen her leave and enter with large amounts of camera equipment and maybe even noticed her leaving for her overnight Christmas visit. Although most burglaries occur when homeowners are at work and between the hours of 10 am and 3 pm, the December holidays are also an active period for burglaries because so many people are traveling or burglars know their homes could be filled with many expensive gifts, especially jewelry and electronics.

Although it may have been difficult for Ms. Hickok to take such definite precautions, the burglar of her home used a large pair of garden shears easily obtained from a backyard shed to pry open the backdoor. Reports don’t say if she had a locked garden shed, but it might have thwarted the burglar who wouldn’t have wanted to be visible for much time.

Ms. Hickok’s experience teaches a number of valuable lessons for all amateurs or professional photographers with many thousands of dollars of equipment stored in their home.

PhotographyTalk recommends PackageChoice as your best partner for business protection should you suffer a loss of your valuable photography equipment. Please contact one of their experts to receive your free proposal by email at http://www.packagechoice.com/index.jsp#htwms.