Belgium photography affords you the opportunity to experience and shoot pictures of two fiercely loyal cultures, French (Wallonia in the south) and Dutch (Flanders in the north).

They have found a way to unite and create a unique parade of human endeavors and accomplishments throughout a long history. In fact, the Belgians celebrate their history with a great number of parades, processions, cavalcades, “ommegangs,” “ducasses” and “kermesse,” which are based on religious or mythological traditions. These festivals and fairs are colorful and exciting and will make for unusual Belgium photography. One of the best known and oldest is the Carnival of Binche, which takes place the weeks and days in and around Ash Wednesday (late February/early March). Many residents dress in costume and dance and perform music in the streets. One of the highlights that you’ll want to record in Belgium pictures is the parade of the Gilles. Appearing as medieval clowns, performers dress colorfully, wear waxen masks and carry special sticks to chase evil spirits from the town. 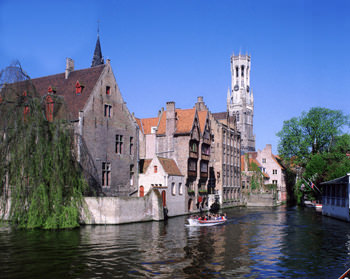 These parades and kermesse are reminders that history surrounds you wherever you travel in Belgium, so it’s easy to fill your Belgium photography collection with photos of castles, abbeys, citadels, grand gardens and many other historical sites and attractions. The Castle of Bouillon stands on three rocky outcrops, with its original construction approximately 1,300 years old. You enter the castle across one of three drawbridges, and then climb to the battlements from where you can take spectacular Belgium photos of the valley and river below. Your kids will love the falconry presentation and the castle’s treasure hunt and fairy tale corner.

Your quest for memorable Belgium photography will take you to the country’s major city, Brussels. Like many European capitals, it is an amazing mix of architecture through the ages and a modern culture of arts, music, fine dining and a young and hip nightlife. The Grand Place, or central square of Brussels, is where your digital camera will be very busy taking many Belgium pictures of the Town Hall, the King’s Hall and guildhalls that surround the square. If possible, visit during August when a million begonias are used to create a fabulous patterned carpet that will become a major highlight of your Belgium photography.

As you continue your tour of Brussels, you’ll want your Belgium photography to include pictures of The Royal Palace. Still occupied by the current King and Queen, the Palace welcomes visitors throughout the summer. As you enter, have your digital camera ready because you will stand in awe of the Grand Staircase, with its magnificent white and green marble stairs, gilded mirrors and stately columns. Equally elegant and majestic are the Throne Room and Grand Hall, with their great displays of furniture, paintings and décor that will hold a central place of honor in your Belgium photography album.

For a complete contrast to your Belgium photos of the centuries-old history of the Grand Place and Royal Palace, point your digital camera at the Atomium in Heysel Park. This 335-foot tall monument was built for the 1958 World’s Fair. This gleaming metal structure consists of eight spheres interconnected with tubes and is a representation of an iron crystal at the atomic level. Not only is the Atomium an incredible edifice to shoot from the outside for your Belgium photography, but also you can capture panoramic views of Brussels from the tower and visit the various exhibits in each of the eight spheres.

It’s this combination of the country’s honored history and modern attitude that will make your Belgium photography album a favorite to revisit again and again.