Portrait photography: connecting with your model 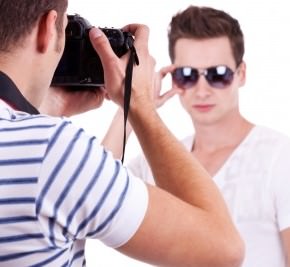 A good portrait isn’t easy to get. Certain elements have to be combined successfully in order to take a good, compelling image. Proper lighting, composition, color tones are all important but it all comes down to one thing when shooting someone’s staged portrait : trust.

This is when your photography skills fall second behind your people skills. It makes no difference whether you’re the best photographer in your area, or you’ve just picked up a camera for the second time . If you can’t get your model to feel comfortable with you, you’re probably going to end up but with some bad pics.

This goes if you’re trying to capture someone’s personality, as well as when using your model as a character, in a more advanced concept.

If you’re shooting someone you already know, maybe a friend, it might be easier, that again ,it might not. I tried shooting one of my best friends for a concept I had. He’s a really funny, relaxed and outgoing kind of guy. As soon as I put my camera at eye level though, it was as if I were a complete stranger trying to invade his privacy. In a tank. It took me a quite a while to get him to be comfortable with the camera and needless to say, I had to reschedule the shoot.

If you’re photographing someone new, maybe a client or a model you contacted online, things could get even more difficult. None of you really know what expect, and even if you’ve discussed details over the phone prior to the shoot, things always seem different when they start happening.

Besides obviously having a friendly attitude, what I believe is the most important thing when taking someone’s photo is to let their personality shine through. It’s a very interesting process because you don’t really know what that person is like until you’ve met them. They might be outgoing ,they might be shy. Getting them to look at the camera or in another direction in the way that you want, has lot more to do with psychology than photography. Having a light conversation about general subjects like music, films , a piece of news can help shift the model’s attention from any feelings of anxiety or fear they might have. This is the time to be focused and prepared to capture involuntary expressions. People often open up unconsciously when thinking about a casual or neutral subject.

If the shoot is more conceptual or has a certain theme, your model will actually be more like an actor. Since it’s not an easy task, it’s very important that you deliver your instructions clearly and in a friendly tone.

Shouting and letting your frustration come out will definitely not work in anyone’s favor.

One of the greatest portrait photographers who I believe is a real inspiration in this regard, is Platon. You might have seen his world famous portrait of Vladimir Putin. Here’s a video in which he talks about working with some of the world’s most famous people.

A portrait should be , at least to some degree, about the personality of your subject. As the photographer, your creative personality should show in the final image.