It Could Happen to You: Unlocked Car in Driveway…Garage Door Opener in Car…Burglar Takes Photo Equipment from Garage 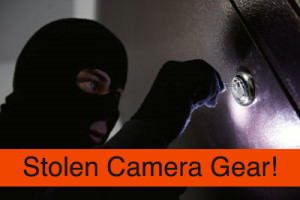 An interesting statistic about burglaries is that 87% are preventable, but not if you do what your fellow photographer in Newport Beach, California did February 16, 2013. This was a Saturday, no less, and the burglary occurred during the day, which isn’t surprising since most are perpetrated between 10 am and 3 pm and during warm weather. It just happened to reach 82 degrees that day.

The news report didn’t state if anyone was at home, but an unlocked car was in the driveway. A garage door opener was in plain sight in the car and when the burglar opened the garage door, he found photography lighting equipment. Hopefully, no one was home (or they weren’t paying attention) because the sound of the garage door opening should have alerted the occupants that someone had entered the garage, and prompted them to react and call police.

This particular burglary incident of photography equipment is a clear example of why you must be constantly vigilant and cautious about where you leave your equipment. As this story demonstrates, it doesn’t have to be during the dead of night or when you’re not at home for an extended period of time. The homeowner/photographer made it easy for the burglar to work quickly, probably matching the national statistic of 90 seconds to 12 minutes for the duration of the typical burglary. This is what is known as a “crime of opportunity.” Burglars know the signs of an easy target and the homeowner gave this burglar huge signs with bright flashing lights.

More than likely this burglar probably matched a number of other home burglary statistics.

Approximately 70% percent of all burglaries are of homes.

This means your photography equipment shouldn’t be left where it is easily seen or accessible whenever you’re not at home. If you have a considerable investment in photography equipment, especially if you’re a professional, and you store it at home, then it is imperative that you have secure storage: a locked closet with a reinforced door or, better yet, a gun locker or similarly heavy-duty metal cabinet. This will definitely deter most burglars since they want to spend the least amount time possible in your home. Even if they penetrate your heavily secured storage space and steal your equipment, your insurance company is more likely to look favorably on your claim because you had done so much to protect your equipment.

We don’t know if the homeowner/photographer in Newport Beach had his equipment insured with a company that specializes in coverage for photographers. In any case, his claim may be jeopardized because he was so lax in securing his equipment.

First, they know these homes are likely to contain the items they want to steal; second, there are more ways to enter the home: multiple doors and windows; and third, a clever burglar can find many places to hide. Some have even been known to hide and wait for the homeowner to leave again, giving the thief additional time to find valuables.

Burglars typically target homes in the middle of a block.

Burglars know that they are more likely to be seen if they try to enter a home on a corner.

Burglars are generally looking for small, but valuable items.

Burglars want to steal items that are easy to transport and convert into cash. The experienced thief knows the likely places in a home to find jewelry, guns, drugs (prescription) and small electronics, which, of course, includes photography equipment. In this case, the burglar didn’t have to enter the home, with the lighting equipment clearly visible as soon as the garage door was opened.

The news story didn’t report the value of the stolen equipment. It doesn’t take many photo lights, stands, umbrellas, soft boxes and accessories to total $2,000, however.

The average burglar lives within 2 miles of the home he burglarizes.

In many cases, the burglar knows the homeowner who he has targeted as his next victim. It’s very possible the burglar of this home in Newport Beach had walked by this home and saw the lighting equipment when the garage door was open.

In only 13% of burglaries is an arrest ever made.

Other than your equipment being stolen, maybe the worst part of home burglaries is that the perpetrator is seldom caught (no less does time) and you can kiss your equipment good-bye. It’s typically fenced or sold before law enforcement even has an opportunity to investigate its whereabouts and recover it.

PhotographyTalk encourages you to use the facts in this article to help make your home and your photography equipment more secure. It’s equally important to insure your equipment adequately.

Also read: 19 types of photographers. Which are you?

How to Protect Your Camera Gear From Wear & Tear

You want to invest in camera gear that will give you long-lasting performance. The photography gear on this list fits the bill to a tee!