I have to admit, when Sony bought Konica-Minolta back in 2006 ,I was pretty disappointed. I had a genuine love for that brand, and after owning a couple of classic Minolta film cameras, it made me sad to see them go. It has been a long time since then, and although I still tend to see Sony as the newcomer in pro digital photography (I just can’t seem to shake it), they have proven over and over that they are more than capable of providing high end solutions and amazing technology. They also have a long tradition of working with Carl Zeiss. This, I believe is one of their greatest assets, along with possibly a large number of great engineers form the old Minolta company, but that part is just a guess. German optical manufacturing is, if not the best in the world, certainly at the highest level.

I can understand the reluctance of many professionals towards shifting to Sony as a brand of photographic goods. While I believe that their cameras are amazing, it is their lenses that make the most important argument in my book. Here are their top three. 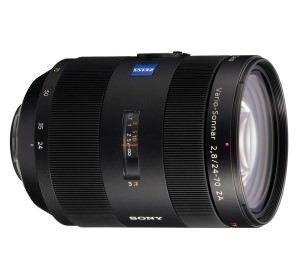 The first thing that strikes me about this lens, and a few others for the Alpha mount, is the way they look. There is just something German about their simple, yet very classy and solid design. They also remind me of cinema lenses and I kind of love that about them. The built quality of this wide angle zoom is everything you would expect form a product in this price range. It has a solid, metal feel to it, and even the parts that are non-metallic are made of a high quality poly-carbonate. Sony also built an auto-clutch into it so that everything happens internally when focusing. The optical assembly is made of 17 elements in 13 groups. Three of the elements are Super ED and ED and they have a special coating designed to minimize aberrations and reflection.

Auto focus is done via Sony’s SSM ( Super Sonic Motor) system and it is very fast and accurate. Mounted on an A99 , it handles just about anything you throw at it.

Image quality is superb. Sharpness is overall fantastic, although wide open there is a slight loss of detail in the corners. Between f8 and f13 however, it is simply staggering throughout the entire frame. Chromatic aberrations are well controlled thanks to those ED elements and pincushion exists at the level of any other lens in this category. You have to really work to get some lens flare as it is very well handled. The biggest drawback I would say this lens has is vignetting. At 16mm wide open it is a bit more than it would be expected and although easily correctable, they should have done a better job at removing it. When mounted on a crop sensor however ( it works great on those cameras as well) it handles it a lot better.

Overall, I would say this is a top quality wide angle lens that should meet even the highest demands of professional quality. 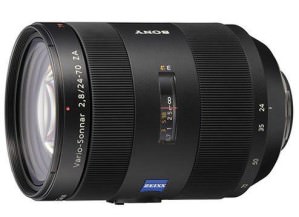 Think metal, glass and tack sharpness. These are the words I would use to best describe this wonderful machine. It is an amazing midrange zoom from all points of view. Very fast and accurate focusing, you can leave it at 2.8 for whatever you are shooting because it will produce fabulous details .The optical design consists of 17 elements in 13 groups, with 2 ED glass elements and 2 Aspherical. It is pretty massive at a little under 1kg, but this is no surprise given the amount of glass and metal it is made of. The overall built quality is very good and even the lens hood is made of metal, although personally I would have preferred it slightly bigger.

The SSM is capable of high torque at low speed and the start/stop response is very rapid. The T* coating used to treat the lenses eliminates reflection , flare and ghost allowing the light in without scattering. Zeiss were actually the pioneers of lens coating so the best is expected and delivered in this case. There isn’t much to criticize. Perhaps only the fact that when you hold the camera downwards, the front of the lens slides to full length, but I suppose it is normal at such weight.

Other than that, this is a pro, high level lens by all means, and even for someone skeptical about choosing Sony as pro brand, let me tell you that you won’t find anything significantly better in this category. 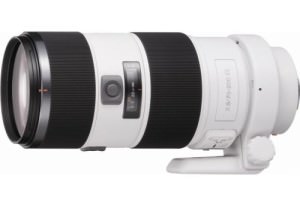 I can’t say I’m a big fan of their decission to go with white (I don’t think Alpha shooters enjoy being asked what Canon they’re using), but that’s just me and at the end of the day it’s how it works that matters. It is aimed at the pros who need medium to long range focal lenghts, high focusing speed and low light capabilities. It does them all. The build quality is top of the line metal, however, and this comes as a abit of a shock, it isn’t sealed against moisture and dust. The optical design is based on an older Minotla 70-200 and to me that sounds like a winner, despite the age of the design. It has 19 elements in 16 groups wuth 4 ED elements. Sony are very different when it comes to stabilization. It comes via camera body and that should mean lighter weight and size. Not the case though. It’s big, heavy and you can’t remove the tripod ring without detaching the lens from the camera.Image quality is excellent.Very, very sharp all the way, good contrast and color rendition , minimized flare and aberrations. The autofocus is among the best in this class, very accurate and almost silent.

For Sony users, this is by far the best possible telezoom. There are more affordable, third party options that could be considere, however optical performance is unmatched.Highly recommended for all Alpha professionals.