Fake equipment- Spotting it and keeping away 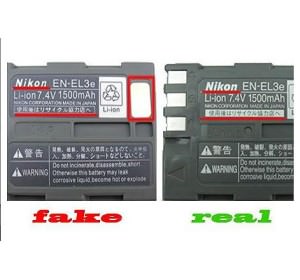 I sometimes wonder how merchants and traders operated centuries ago, when besides gold and jewellery, pretty much everything else was authentic.But that’s just me being nostalgic. Fast forward to the lovely 2013, people copy the work of other people, in their restless pursuit for financial gain through shady methods. Like everything counterfeited, the frauds of the photography world are usually cheap, badly built, unreliable, and overall lies. Since the tireless entrepreneurs of the fake business will copy anything from watch crowns to entire vehicles, a large portion of counterfeited goods is to be expected in the photo equipment market. Luckily, the big stuff like cameras and lenses, aren’t that easy to fake, so there aren’t that many around. The things to be truly worried about are the accessories. Some of the copies have become so good, they are as hard to spot as some well-made Rolex copies. Here is a quick guide that will tell you what to keep an eye on.

For better or worse, the manufacturing process of a DSLR isn’t the easiest nor cheapest in the world, and the assembly line for these products cost fortunes. There are fake DSLRs out there, but thankfully they are pretty rare in the Western world and fairly easy to spot. Look for the brand name, because most of the copies have altered logos. If you see a “Canonmatic” , be sure to walk away. That is of course if the build quality doesn’t tip you of first. They are usually made of cheap plastic, they’re very light compared to the original and have an overall toy feel. It’s pretty easy to stay safe from these frauds, as long as you avoid street vendors and shop from authorized dealerships or trusted retailers.

Unless you mistake a lens-like coffee mug from the real, chances of buying fake glass are pretty slim. Not inexistent though. If you suspect a counterfeited lens, look at the construction, and pay special attention to details around the rings and lens mount. Also, if you see an 18-105VR kit lens available for 50$ on Ebay and with no mention of flaws , it’s a pretty safe bet to stay away.

As we move into the accessories department, things get complicated. Really complicated. Card counterfeiting is widely spread in some countries and very profitable for the people who do it because it’s hard to spot the fakes. There have been cases, and not isolated ones, when premium camera equipment dealers ended up selling fake Sandisk or Lexar cards without even knowing it.

The most common symptoms of bad cards are buffer overruns, data corruption and slow write/read speed. The really ugly part is that these copies are so advanced, you can’t tell that you’re dealing with a fake even after you’ve started using it. You could be spending good money on a 16GB or 32GB card that has a real capacity of only 4GB. The method used by the counterfeiters implies reprograming the card’s controller to make it show a higher capacity. That means that when you put the card inside the camera or in a computer, it will show you a 32GB capacity. You probably won’t even notice something is wrong until you pass a certain number of photos taken. Once the real 4GB capacity is reached, you’ll be left wondering why you were able to take only 500 photos on your brand new high capacity card.

Related Article: One-Third of All SanDisk Memory Cards are Fakes: How to Identify Counterfeit Memory Cards

It is therefore quite difficult to be safe from this kind of crime. First of all, after you’ve bought a card, visit the manufacturer’s website immediately. Most of them offer quick verification guides that will let you know what you’re dealing with right away. You will probably be asked for the serial number (always make sure such a code isn’t missing from the package), the bar code and possibly some details about the wrapping. All important brands pack their products in heavy, solid plastic and most of the times there is a hologram there too. It’s not a full guarantee of safety, but it gets pretty close. Needless to say, never, ever, buy a card with an unsealed package. To test a memory card, download H2testw 1.4 . It is free software specialized in detecting fake cards. It works by writing dummy information onto the card and then reading it back. If errors occur, a full report will be issued and you will know you have bought a fake memory card. It only works for PC though, but if you run Windows on Mac, it’ll be just as fine.

They are some of the most counterfeited products ever. They are also incredibly well disguised. They are so hard to spot, that major brands were forced to sound the alarm for the public numerous times and have them be careful when purchasing batteries. Nikon has recently issued warnings about counterfeited EN-EL3e batteries being increasingly present in some markets. Mind you, these are not batteries designed to match the cameras, but with a different brand name and logo. They all have Nikon written on them and look astonishingly similar to the original. There are, however, a few minor details that blow their cover.

This is one of many cases. The best way to protect yourself and your camera from these black market frauds is to buy as much as possible from authorized dealers who issue warranties. If you find a battery like this online, for a good price, keep in mind that if it looks too good to be true, it probably is. The fact they work or not isn’t really important. The real risk behind using one of these batteries is permanently damaging your camera. For 20-30$ less, I’m not sure it’s really worth it.