10 of the most influential photographers of today 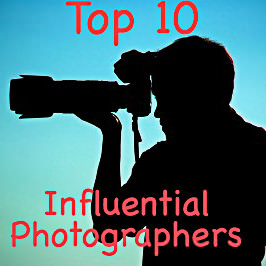 It’s a great thing to be able to stay connected with the professionals of your field and their work. Photography is no different. Today’s photography is a lot more than shooting and developing. With the birth of social media, the new channels of communication make it easier than ever for highly valued talents to broadcast to their audience. Some of the most successful photographers of today are also active bloggers with many followers. They have no fear of sharing and that is part of why they are so appreciated .Here is a list of ten of some of the most inspiring and socially active photographers of today.

It’s fair to say he is one of the giants of photography. He’s been around for a long time and his work is known worldwide. He is one of the most versatile photojournalists ever and he has covered stories for Life, Men’s Journal, Time and National Geographic. Joe is also a pioneer in flashgun photography; his style and technique are easily recognizable .His photographs are an inspiration for generations of photographers and they are likely to remain so for many years to come. McNally’s blog is an excellent read and his Twitter account is one of the most followed among photographers.

Here are some great learning books written by McNally:

Chase is one of the best examples of how far you can go as a self taught photographer. Besides having a huge talent, he is also one of the most visible photographers on the Internet. In 2010 he launched CreativeLIVE, a platform that offers free online classes in photography, programming, image editing, design and fine arts. In 2011 he began broadcasting Chase Jarvis Live. The focus on these shows is on interviews with fellow pro photographers, art directors and authors. Although he doesn’t blog daily, Chase’s blog posts are quite inspiring for many shutterbugs. He is also a director so remember to check out the awesome videos as well.

Jasmine was nominated as one of the top 10 wedding photographers in North America by American Photo Magazine. That alone is a great achievement, but mix it with the fact that she’s only been in the business for a few years and you will come to the conclusion that there aren’t many like her out there.

She is indeed a very good photographer, but besides that, her way of communicating on her blog and Twitter have turned her into an online personality.

Zack is a great inspiration for the younger generation of photographers, and not only. He started photography a long time ago but had to reinvent himself several times before reaching the level of popularity he enjoys today. Besides being a talented photographer, he is also a great trainer and his approach on lighting is unique. Zack teaches a workshop called “One Light” that focuses on how to photograph using a single strobe. Socially, he is a blogging guru. Besides Twitter, a while ago he started a Q&A blog and, not surprisingly, it reached the landmark of 1000 questions. Check him out and you won’t be disappointed.

Di Fruscia is one of the most appreciated landscape and nature photographers of today and he is also one of the most socially active ones, having an impressive 1,6 million followers on Google+. He is also active on Twitter.

Having been raised mostly in the Canadian countryside and being the son of a photographer , it is no surprise that he found his way as a fine art landscape shooter, and that has earned him many awards.

Joey is a phenomenon. He is one of the top commercial and portrait photographers of today and he also does impressive documentary photography. All that while still in his early twenties. He made his way up with a personal approach on lighting and post processing. He started with bands, and lately he has photographed three Oscar nominees, a lot of campaigns and other celebrities. He is highly active on Twitter and his blog.

Check out “Photographing Shadow and Light: Inside the Dramatic Lighting Techniques and Creative Vision of Portrait Photographer Joey L.”

Trey is a master of HDR photography. His interest in the field was partially sparked by the fact that he was born blind in the right eye. He began experimenting with various HDR techniques after being disappointed with regular landscape photos that did not look anything like how he remembered the locations. His website, colorfully named Stuck in Customs, contains his work as well as his HDR tutorial. His Twitter account is also quite busy.

Trey also wrote a book: “A world in HDR”.

He has been a full time photographer since 1981 and he’s photographed for many of the Fortune 500 companies. He has traveled across the world and photographed beautiful landscapes and interesting people. Like many of the top photographers in this list, he is a great teacher and has written some best selling practical photography books. Bryan admits to no spending so much time in front of a computer , as he prefers to be behind the camera as much as he can ( who wouldn’t?), but he has generously shared his knowledge in his books.

Jeremy began his journey into the visual arts as a painter. It wasn’t long, however, before he figured out that photography was his true passion and he went on pursuing it full time. He gained respect fairly quickly and developed a personal style. Since then, he has photographed many celebrities and has done work for major brands. He posts regularly on his blog and Tweets as well, while being an inspiration for aspiring photogs.

Kelby is one of the best photography and Photoshop trainers out there. He is the President of the National Association of Photoshop Professionals and author of some best selling books. He runs a site called Kelby training, which is full of amazing videos on photography and Photoshop. His Twitter account is a pretty busy place, but it’s no wonder, the guy is sort of a rock star, like the rest on this list.

Here are some of Kelby’s books: